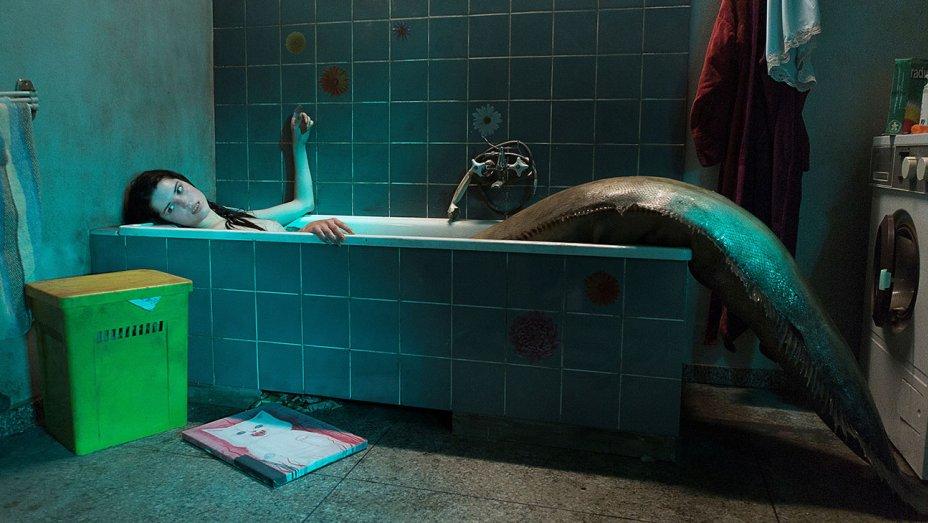 Polish language film The Lure is most likely the strangest mermaid flick to hit the states, and yes, "mermaid" is really what lures the audience in. Originally titled Córki dancingu, the film is truly an evocative and original take on the monster genre, with its larger-than-life sensibilities and unrelenting approach to how musicals flow. Sadly, this horror musical never fully adopts its own genre, instead opting for scattered ideas that make certain scenes work, while a majority of the connective tissue is washed up.

Figs and Dates, a trio of musicians who rock Warsaw’s dance club scene, didn’t expect their night by the lake to turn into an encounter with fantastical creatures. Golden and Silver, two ethereal and gorgeous mermaids, took the group by storm, especially its youngest member, Mietek, and quickly join as groupies turned singers. Apart from their shockingly gorgeous appearances, both creatures have the ability to lull audiences into ecstasy with their voices; a perfect fit as backup singers for the band. However, as Silver grows more and more infatuated with Mietek and adopts a more human existence, Golden realizes she may lose her sister to her persistence on becoming a landwalker.

What works extremely well for The Lure is its ability to move from scene to scene without becoming stale. The audience can never fully expect what will come, as two killer mermaids who want to become rockstars isn’t a plot that’s been covered often in film, and this creates an experience that feels refreshing and fun. The large caveat here though is that taking these fresh steps comes with a risk, as trying to float from plot point to plot point needs more substance.

Unfortunately, this feeling turns into a bit of a mess as the additional threads of plot begin to unravel. What begins as a story of two fantastical sisters interacting with the seedy underbelly of Warsaw dance clubs, turns into a strangely simple love story that takes detours into drug addiction and murder. It’s clear Golden is the more independent sister, as she chooses to maintain her mermaid roots (or seaweed) by looking for blood, but she randomly joins a rock band and doesn’t seem to do much to coerce her sister from making a drastic decision. Most of the film's characters experience this kind of rapid fizzling, as they are all well introduced only to be thrown away after a few scenes.

The members of the band don’t take too much spotlight either, despite a few dreamlike sequences which attempt to make them seem more important than they really are. The more problematic of the group being Mietek, as his "loose with the ladies" persona quickly drops away after Silver steps fully into human form. It's completely acceptable for characters to make decisions outside of viewer expectations, but there still needs to be a reason.

It’s a memorable film to be sure, but never manages to maintain a steady pace of "good" throughout the run. It’s not that The Lure is entirely a mess, and in fact could be considered a great film in its ability to transcend genre conventions. However, replacing tropes with random plot filler and side steps isn’t the way to subvert expectations.