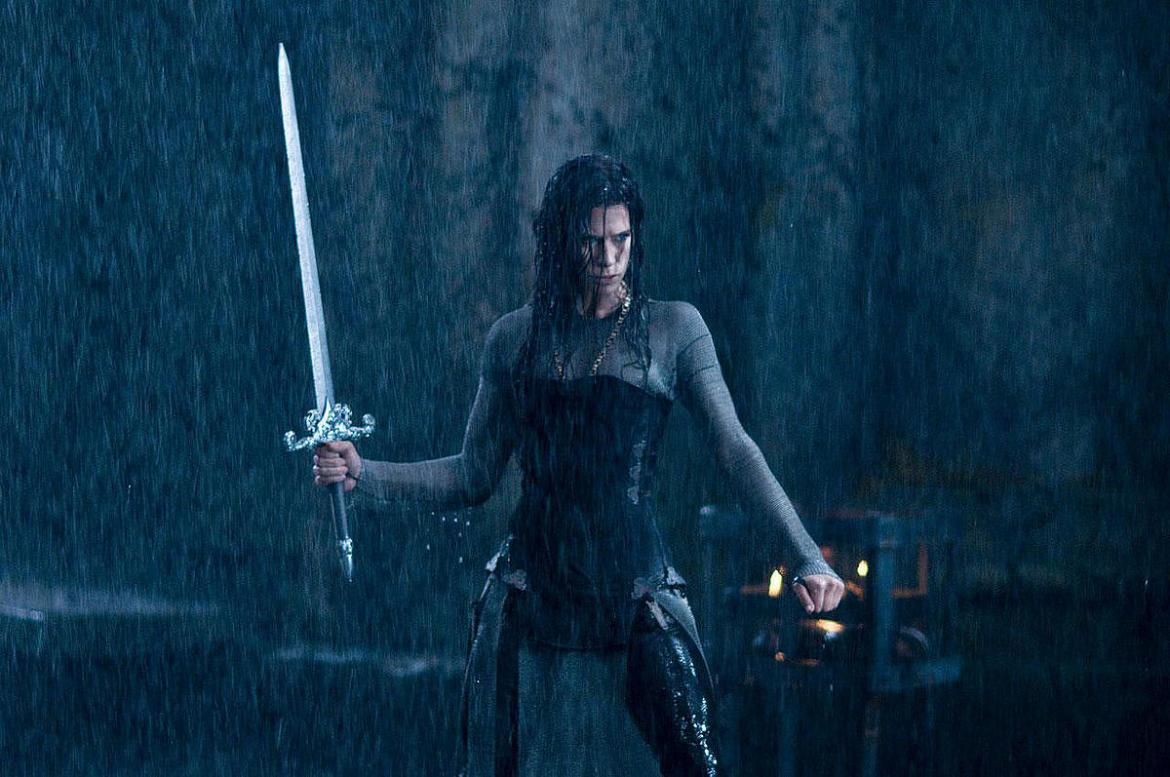 After two films in the world of "Underworld", it was deemed necessary to travel back in time to tell the origin of the blood feud between Vampires and Lycans. Originally bred to be slaves to the oppressive vampires, the first Lycan/Human hybrid Lucien falls in love with Victor's daughter Sonja. Being an aristocrat, Viktor can't handle Sonja shacking up with the household help, so he sets in motion the events that lead to the centuries long feud between the two races.

If the "Underworld" franchise has to have one thing pointed out about it, it's that it brings to the screen a version of the fearsome fangs that are all its own. Filled with fuzzy visuals, blue lights and tight leather, it is a visual treat at times even if it is filled with CGI and wire-fu that smacks of "Matrix-envy". They're not bad films and the first one I dare say was downright enjoyable. In "Underworld: Rise of the Lycans" they continue this world-building journey by giving us a detailed back story for the conflict which these movies center around. It's well thought out and fills in the gaps that are hinted at in "Underworld: Evolution" so that it is a good fit to the overall puzzle. With three films under their belt taking place in this blue-fuzzy world of darkness, the back story is an appreciable but ultimately fails to excite.

There is one major change in the setup here, that being the exclusion of Kate Beckinsale who was the beautiful face of "Underworld" previously, and replacing her with Rhona Mitra. This is a direct shoe-for-shoe change and Mitra's role is well integrated into the story so it is easy to accept. Mitra even does an great job of fitting into the world and making it her own. There are similar elements that connect her back to the original Selene but she still manages to carve her own niche. She's proven herself in other genre staples as highly capable when it comes to action sequences, and she continues to do well in that area here. Again however, there is nothing new brought to the "Underworld" universe, beyond the backstory.

"Rise of the Lycans" suffers from an identity crisis. It serves a purpose in story telling, and it does a commendable job of matching the over the top action of the first two films. It also fails though to bring anything new to make a third return visit worthwhile. While the film will work fine for die hard fans, it will do nothing to wow those that were on the fence after the second outing. It's a sad fact as even I mark myself as a fan of this series. I've seen this same movie twice now, which is one more time than I wanted to. All of the staples are there. We've got leather clad vampires. We've got bestial werewolves who look all scruffy and downcast in human form. Crazy leaping and flipping sword fights. Computerized werewolf transformations. Everything we've seen, now for the third time.

While it does nothing to shake things up, "Underworld: Rise of the Lycans" is a decent entry to the franchise. Though underwhelming, it still manages to flesh out the story hinted at throughout the first two movies. Fans should at least be pleased sink their teeth into some back story. Rhona Mitra is a welcome addition to the cast as well and fills Kate Becknisale's leather catsuit quite well. Good for an hour and a half of time killing but it won't exactly knock your socks off.