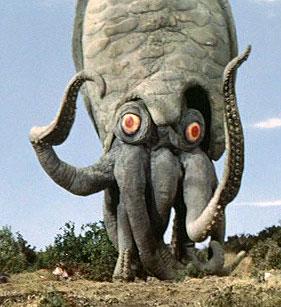 I used to posses a talent for summoning up the right song to accompany the tone of a moment or occurrence. Or perhaps ‘right’ is relative; I would start humming, singing or just thinking of a tune that seemed to be thematically tied to the things I was experiencing at a given time. For instance, during early pregnancy my wife would ask, “Does my stomach stick out too much in this blouse?” And before the appropriately reassuring statement could be jostled from my data banks the refrain from Morrissey’s “You’re the one for me, Fatty” would be on the point of crossing my lips. So actually, “right” might well be the wrong word.

For some time I thought I had lost this knack for apropos song recall as it hadn’t really been in evidence since the birth of my son. Then I realized that for two weeks I had been singing the chorus of Placebo’s “Space Monkey” every time I passed the TV. Eventually I put together that inside the entertainment center was a Netflix envelope containing the movie “Space Amoeba” which I had been neglecting to watch for about a month. Of course, it still took me a few days to actually stick it in the DVD player and during that time “Space Monkey, in the place to be” became “Space Amoeba, in the place to be”. I even added a stiff little dance to the performance just to entertain my son while he is ate his avocados. My god, it just dawned on me, I don’t have an iota of measurable dignity left.

“Space Amoeba” begins with a Japanese space probe, Helio 7 being sent to Jupiter on a fact finding mission. A few months into the mission, Helio 7 is hit by a cloud of astral pixiedust which hijacks the vessel’s command module and points it back towards earth. Unbeknownst to almost everyone on terra firma the probe returns and lands in the Pacific. By sheer coincidence a photographer named Kudo happens to spy the craft going down on his flight back from Brazil. Upon arriving in Japan, Kudo is recruited by a resort development company to take pictures of a remote island named Selga, which just happens to be near where he saw Helio 7 splash down (As this information was revealed a predictable chorus of “It’s a Small World” started to play in my head). Kudo refuses the job until he learns that Dr. Mida, a renowned scientist and former television personality believes that Selga Island may be home to giant monsters.

As luck would have it the pixiedust or space amoeba is actually a galactic monster named Yog that possesses other organisms for evil purposes, often swelling them to Brobdingnagian proportions. So by the time Kudo, the Doc and the rest of their crew reach Selga there is a giant squid putting the screws to natives and surveyors alike. Selga Island, aside from being home to a land-loving supergiant squid is a mélange of good modeling, nice location shooting and proposterously bad matte paintings (and Johnny Rotten shouts in my head “Cheap dialog, cheap essential scenery”). It leads the viewer to think that perhaps Ginger and Mrs. Howell are sunning their goods around every corner.

Led by the surprisingly courageous Kudo the small band of new arrivals do battle with the amoeba as it continues to jump to new hosts and morph them into giant monsters. Man versus cephalopod becomes man versus crustacean then man versus reptile or whatever phylum or class the giant box turtle/horny toad thing belongs to. Eventually Kudo and the Doc figure out that the amoeba can’t stand ultrasonic waves and they hope to utilize the islands bats to dispatch the beast. Unfortunately a sleazy corporate spy masquerading as an anthropologist has been possessed by the amoeba and has set out to burn up every winged mammal on the island (This subplot kept the Kiss song “Burn Bitch, Burn” looping in my head and an intermittent, off key “wooo, wooo, wooo” streaming from my mouth. Again, dignity, all but gone)

And then there are the lowlights; the soundtrack starts with amazing promise then turns into “The Perils of Pauline”. The plot is a lazy sundae with “King Kong” sauce on a pile of “Invasion of the Body Snatchers” ice cream, topped off with a volcanic event (of course). Entertaining though it may be, the only thing that really leaves a lasting impression is the odd gait and creature design employed to bring the giant squid to life. Beyond that very little from “Space Amoeba” remains in memory once the final frame unspools, unless of course you count unwanted earworms with hybrid lyrics. *Does a bad robot dance* “Space Amoeba in the place to be”. And on that final note a humble request; if you happen to find my self respect barefoot in a Denny’s parking lot at 4 a.m. please punch it in the neck and mail it back to me.