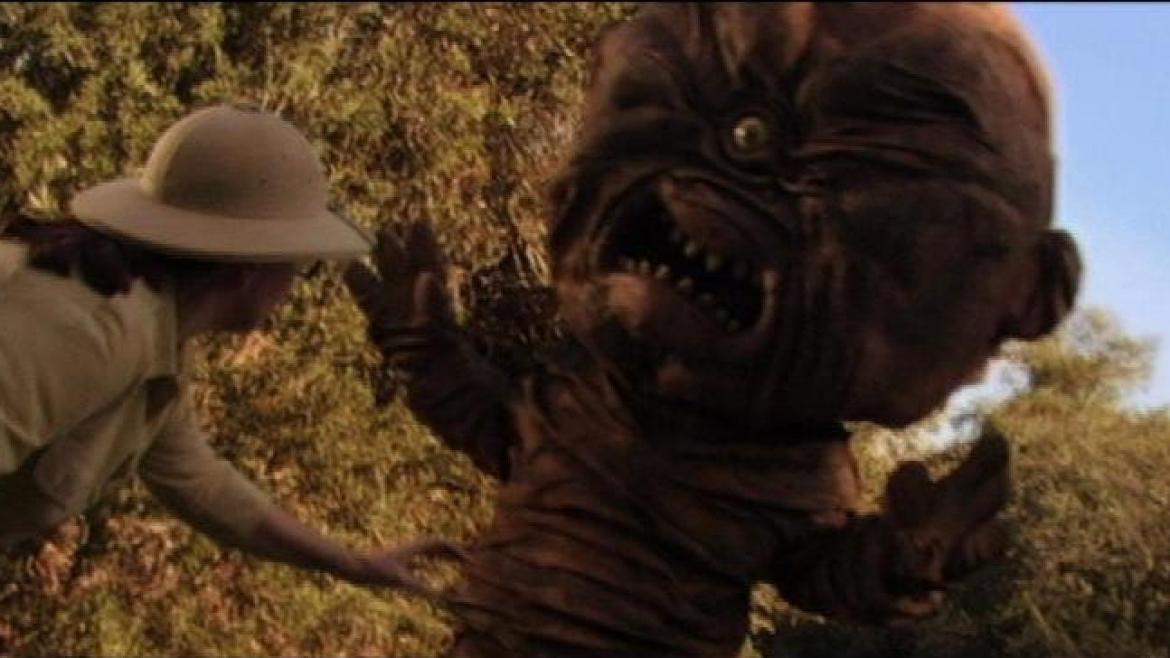 Back in 2001 the world was blessed with Larry Blamire’s creation “The Lost Skeleton of Cadavera”. The movie did an outstanding job of lampooning the era of science fiction and horror flicks where rubber suited monsters and horrid effects ruled the day. The humor was fast paced and constant and the plot was suitably hokey to keep the viewer near tears form laughter throughout. This past year, Blamire has brought together the same cast from the first film for “The Lost Skeleton Returns Again”, the continuation of horror coming from the smart mouthed skeleton villain of the first movie. If you’re wondering whether Blamire and crew were able to pull off the feat of “Lost Skeleton of Cadavera” once again?

Let me put it this way; “The Lost Skeleton Returns Again” wore me out. I haven’t laughed that hard since the first film.

For this second go around, a lot has happened since Dr. Armstrong and his crew last battled the Lost Skeleton of Cadavera. The Dr. himself has become a bitter man stuck in a South American jungle. He’s discovered the rare metal Geranium-90 but somebody else took credit for his find! While away, his faithful wife Betty has kept a lonely vigil for the past two years, keeping up their home and being a dutiful wife. Such is the life of a scientists wife! Dr. Armstrong isn’t the only person in search of Geranium-90 though. While digging through his late evil twin brother’s belongings, Peter Fleming uncovers the skull of the Lost Skeleton. Of course, the only thing that can make the Lost Skeleton’s body complete once again is the mysterious Geranium-90. Seeing has he has no legs or hands, he takes control of Peter Fleming and they take off in search of the rare element. One would think it would be pretty easy to find a rock in the jungle. One would be wrong though considering that the Geranium-90 is guarded by the Cantaloupe people in the Valley of the Monsters. This factor doesn’t slow down Dr. Armstrong and pals though; they’re working for SCIENCE.

When forced to explain to the uninitiated what to expect from a “Lost Skeleton” movie, I generally fall back to explaining the plot in bursts between fits of laughter. It’s one of those ‘you had to be there’ things because simply talking about it reminds you of a number of jokes and soon you’re laughing to yourself and your co-worker you were talking to thinks your nuts. For myself, I’ve yet to get past the scene in “Returns Again” where The Skeleton has taken control of “Carl’, a simple minded crook without fits of laughter. The banter between the Skeleton and Carl as they trudge hopelessly through a small grove of bushes is pants wetting-ly funny in both simplicity and delivery. “Carl...Carl, where are you going....Why are we in the bushes Carl?” Out of context, such a scene doesn’t seem like much. After you’ve been primed by forty five minutes of constant jokes and subtle one liners, it is down right hilarious. Such is the nature of “The Lost Skeleton Returns Again”.

The story of the “Lost Skeleton” movies are secondary to the jokes and timing of the excellent cast. Sure, there’s a story there and it fits perfect with the era of film they are trying to parody. There are moments in the film where you can pinpoint an homage to Ed Wood Jr. and other bastions of 1950’s era cheese. The plot runs similarly lean as its predecessors once did; that’s okay though. What we’re really here for is to watch them crack jokes as they work their way through the outline. For “Returns Again” though, they do manage to work a little bit of magic with the characters and backgrounds involved. With Dr. Armstrong we’ve watched him transform from a bright eyed scientist doing science for science. Here, we watch as he has become a darker version of himself, driven to bitterness by his time in the jungle. Various characters met their ends at the hands of the monsters in “The Lost Skeleton of Cadavera”. Thankfully, they all had twins though and they were available for filming. Even Animala, the velour suited cat beauty that hypnotized everyone with her power of dance is back in a newer form. She’s still a cat and she’s still a hell of a dancer; she gets a bit beefier story line however and becomes just a little more integral to the course of the film. In fact, the only character that hasn’t changed much is Dr. Armstrong’s wife Betty. She’s still lovely and hopelessly devoted. She’s hopelessly oblivious as well.

“The Lost Skeleton Returns Again”, to put it bluntly, is downright hilarious. The humor is more of the same that was started in “The Lost Skeleton of Cadavera” while managing to be fresh all at the same time. The monsters that attack our erstwhile adventurers are creative and hilarious at the same time. If you were a big fan of the first film, you must see the sequel. It’s just as good. If you haven’t seen either, get your act together and go find them. You’re going to laugh. Hard.