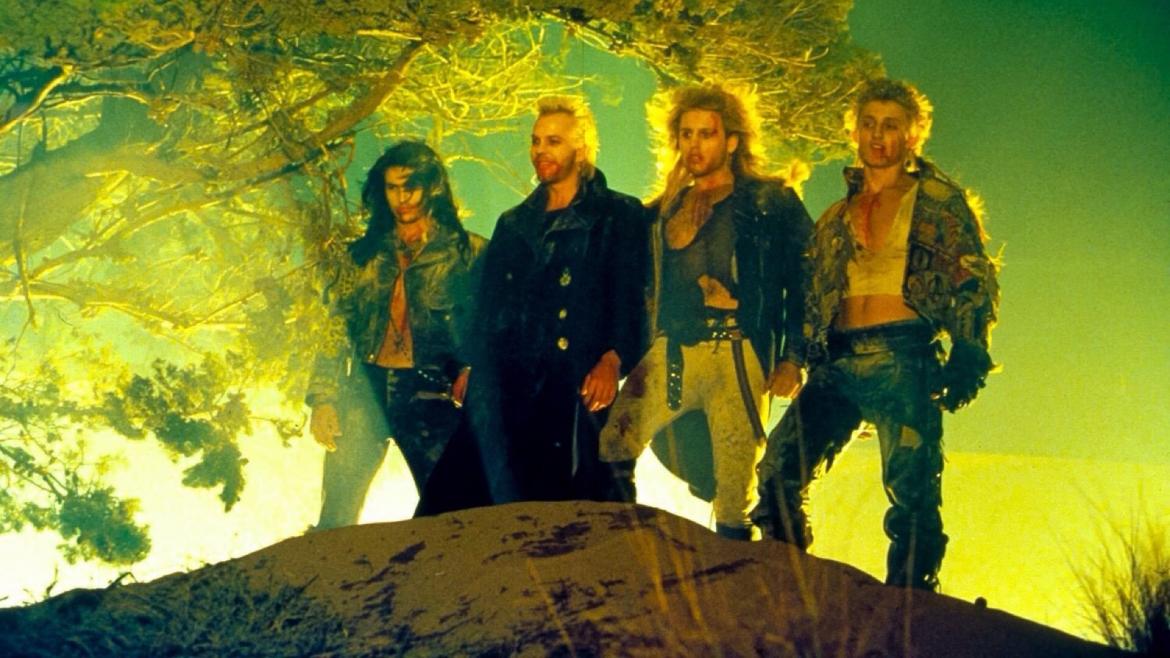 If you had asked me a week ago how I felt about “The Lost Boys” I would have told you that I loved it. That it was a classic 80s horror movie. That it was one of the great vampire movies of its time. That was how I felt until I rewatched it for the first time in about 20 years, seeing it for the first time not as through the eyes of a contemporary horror loving kid but as a grumpy, grown-ass early 20th century movie critic. Now grumpy, grown-ass movie critic me has to urinate on the Frosted Flakes of my younger self and admit that when nostalgia is taken out of the equation, “The Lost Boys” is a bad movie as well as a somewhat questionable one that has not aged well at all, and only works as a kind of kitschy time capsule to the strained, self-conscious attempts at coolness that passed for actually being cool in the 80s.

In case you need a recap, "The Lost Boys" is the story of brothers Jason Patric and Corey Haim who move with their mom to their grandfather’s house in the California beach community Santa Carla. While trying to get closer to a girl while visiting an amusement park, Patric runs into a gang of vampires wearing the mullet and leather combo so frequently worn by tough-guy 80s baddies. Pursuing the girl causes Patric to find himself pitted against vampire biker gang leader Kiefer Sutherland in a fang-measuring contest involving an ever-escalating series of stupid stunts and a lot of screeching henchman laughter. After a dinner of spoooooky Chinese take-out washed down by swigs from a bottle (of BLOOD!) that looks like the result of an unfortunate meeting between Lil Jon and a Beadazzler in a Hot Topic, Patric joins the Boys in hanging from a railroad bridge as a train crosses overhead before finally dropping into the fog-machine choked emptiness below. He awakens in bed the next day- was it all a dream, or just an over-used and unoriginal plot device?

Meanwhile, younger brother Corey Haim impresses a pair of adolescent wannabe Van Helsings in paramilitary gear with his encyclopedic and suspiciously bullshit-sounding knowledge of the proper filing method for comics (apparently, the cool kids go by obscure plot points and not just numerically by issue number). These underage army surplus store aficionados are the Frog brothers, Santa Clara’s self-appointed guardians of truth, justice and conveniently exposition-laden comic books. Convinced that Patric has been turned into a half-vampire, the brothers are itching to become half-vampire slayers, but Haim makes a few comic book-based logical leaps and becomes convinced that he can save his brother by killing the head vampire, who in an Encyclopedia Brown-like burst of deduction, he surmises must be his mother’s new boyfriend because, er, he works the night shift and has a dog.

At the risk of being a snide internet revisionist critic, what really struck me on my rewatch of “The Lost Boys” was just how, well, gay it all seemed. Granted, the 80s were a decade before gaydar when people could quite honestly and innocently not be aware of the sexual orientation of Boy George or Freddie Mercury, but “The Lost Boys” could give “A Nightmare on Elm Street 2” a run for its money as one of the most unintentionally gay horror movies ever. From the cheesecake Rob Lowe poster on Haim’s wall to the greased-up saxophone rock solo at the amusement park, “The Lost Boys” is a man-filled movie. In fact, the movie noticeably lacks female characters. Other than the mother character and the female love interest, “The Lost Boys” is almost entirely immersed in the brotherhood of man. Ostensibly, Patric and Sutherland are vying for the affections of a girl but it’s hard to shake the feeling that if forced to choice between her and a lively round of greased-up Greco-Roman wrestling, the boys would be reaching for the baby oil with little hesitation. The less said about Corey Haim singing about being a “lonely girl” in the bathtub, the better. Let’s just remember that this film was directed by Joel “Bat-Nipples” Schumacher.

While I found “The Lost Boys” to be nowhere near the classic its reputation implies, I can't say I completely hated the movie. The Frog Brothers were fun and the Grampa character is great, with his penchant for taxidermy, improvised aftershave and that deservedly iconic final line. The film also looks nice with vampire make-up and other special effects that hold up pretty well two decades later. These details might be fun, but they don’t carry the movie. Fans of 80s cheese might eat up “The Lost Boys”, but once the nostalgia passes, it’s a fairly lackluster movie that has more in common with “Twilight” than “Fright Night”.