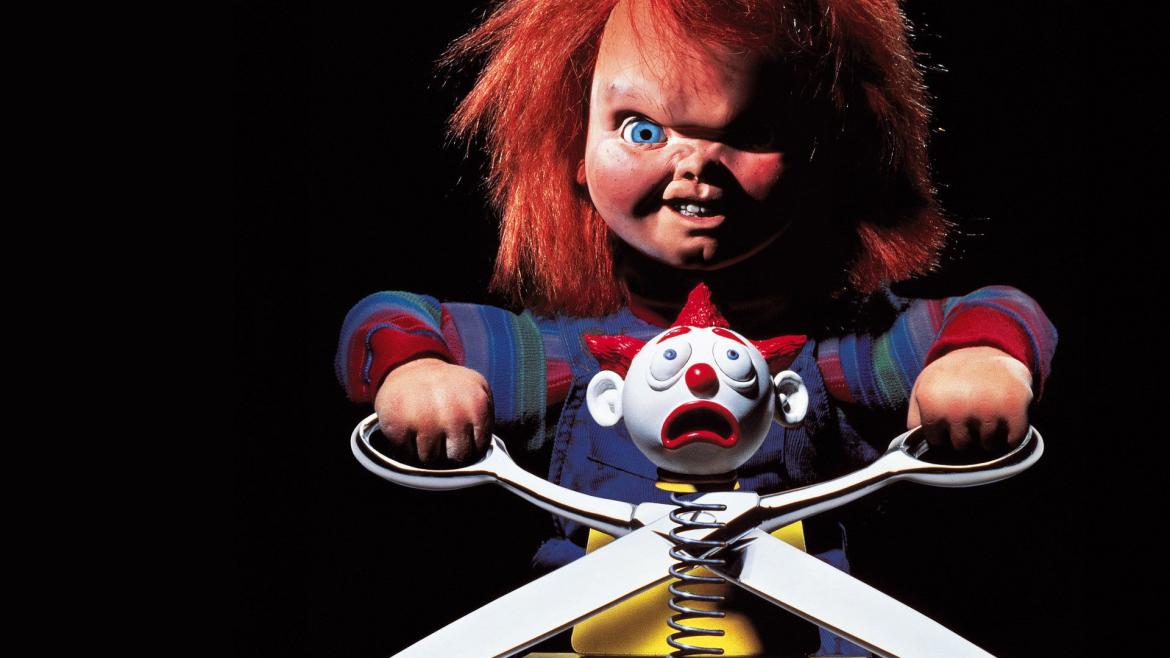 Great horror villains are distinguished by their ability to terrify in ways no other killer can (see: Freddy Krueger, Leatherface, Romero’s Zombies). Knife wielding slashers are a dime a dozen, but Chucky endures because, as a murderous doll, he can hide in plain sight, fit almost anywhere, and cast the suspicion of insanity on anyone who discovers the nature of his true self. It doesn’t hurt that, whether in placid repose or in killer mode, his face is indelibly gruesome (the Child’s Play franchise posters are some of the most iconic art in horror). From basic premise to design to execution, Chucky is one of the great horror achievements of the last fifty years.

This also explains why the franchise’s first sequel falters a bit while we wait for the inevitable rematch between Chucky (Brad Dourif, all hail) and his former owner, Andy Barclay (Alex Vincent): too many of the deaths in Child’s Play 2 could have been done by any killer, in any film. The start of the movie finds Andy in an oppressively middle class foster home after his mom is taken, unseen, to an asylum for raving about the killer doll who harassed her family (Catherine Hardwicke is sorely missed). Andy tries to make friends with his angsty foster sister Kyle and his ice-cold foster parents, but his attempts at normalcy are thwarted when Chucky shows up, almost immediately, to continue his quest to transplant his soul into Andy’s body--and kill whoever he wants in the meantime (Chucky’s back, by the way, after the Good Guys company rebuilds the original to prove to the public that he’s harmless. Time for a recall!)

Sewing machines and priceless ceramic heirlooms are an interesting, even clever, backdrop for Chucky, but it should make the scares stand out, and they don’t: a bag over the head from the backseat is a gangster movie staple we’ve seen fifty times already, and falling down the stairs is way too easy. Only when Chucky goes after Andy’s teacher with a yardstick and a basketball pump does the setting cast the horror into shocking relief. But the reason why he kills her isn’t all that clear, and this brings us to the movie’s second major issue: Child’s Play 2 has a fair share of plot holes, especially once the body count starts piling up around Andy and no one really puts it together. His teacher’s death is never mentioned again, and though his foster-mother assumes Andy is responsible for her husband’s murder, she sends him back to the foster center instead of contacting law enforcement. A shout out is due here to the great Grace Zabriskie for her small role as the center’s Director, memorably killed while being photocopied.

Not surprisingly, the movie’s greatest sequence--and the reason Child’s Play 2 deserves to be recognized as the sequel that’s truest in spirit to the original--comes when Chucky returns home, to the factory where he was both made and remade, terrorizing Kyle and Andy amidst brightly colored packaging and doll parts (the device by which they all arrive there is unimportant, please refer to the preceding paragraph). Chucky is fake-killed and brought back so many times in this scene I lost count; it feels like the creators came up with too many ideas and decided to use them all. It doesn’t matter, because they’re all great--and maybe the realization that it’s more fun to wreak damage on Chucky rather than watch him kill humans influenced the weird but welcome turns the series took in later installments. It makes you wish the creativity had been spread around more evenly, but the final scenes are still a horror climax to be proud of, and Child’s Play 2 is definitely worth seeing if you’re a fan of the original.