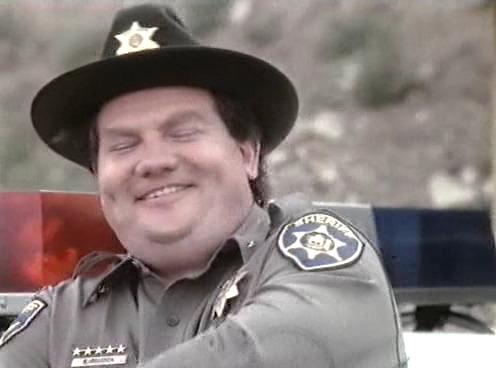 When I recently learned about the existence of "Troll 3", I nearly soiled my Boba Fett Underoos. You'd think that someone such as myself, a guy who wastes more time wallowing in cinematic filth than just about anyone on the planet, would be well aware of the third installment in one of the greatest franchises to ever grace the big -- and small -- screen. "How could this have happened?" I wondered aloud to no one in particular. Have I been spending too much time partaking in the glossy efforts pinched from the anus of the Hollywood digestive system? I'm honest not sure. The only thing that concerned me from that point was locating a copy by any means necessary.

A friend of mine happened to own a copy of "Troll 3" on VHS. I asked to borrow it, and he graciously obliged. Strangely, the artwork proclaimed the film to be "The Crawlers", and not the impossibly hard-to-find second sequel to John Carl Buechler's cult classic. However, a little footwork on IMDb quickly revealed that this frighteningly awful production actually has several names, including "Creepers", "Contamination .7", and, yes, "Troll 3". Although I'm still uncertain as to which title was originally packaged with the film, I'm willing to overlook this discrepancy due in part to my unhealthy obsession with the "Troll" series. If there's a special ward at the local loony bin dedicated to such conditions, you can rest assured that I'm a prime candidate for admission.

Directed by Labrizio Laurenti and prolific schlock salesman Joe D'Amato, "The Crawlers" -- I'm sorry, "Troll 3" -- is precisely the sort of low-budget, low-brow cold sore you'd expect from the directors of "Witchery" and "Sex Penitentiary", respectively. Nothing ever makes sense, whether it be the motivations and actions of its highly unpleasant characters or the illogical nature of its vegetative villain. Imagine the rape scene in Sam Raimi’s “The Evil Dead” stretched into one long 90-minute excursion into cinematic insanity. Now remove the rape and add some nuclear waste. Like what you see? I didn’t think so. Yours truly, on the other hand, can’t get enough of this stuff, and would gladly watch this series on a loop 24 hours a day if given the opportunity. That’s how I roll, homeboy.

Specifically, the film follows the exploits of a floozy named Josie (Mary Sellers) as she returns to her bumpkin roots after spending a fair amount of time in the much-fabled “big city”, a magical land her backwoods hometown buddies refer to with great contempt. Following an impromptu shag in the woods with her former fiance Matt (Jason Saucier), the lovers discover the mutilated body of a woman Josie spoke to at length during her long bus ride into the heart of absolutely nowhere. The police refuse to investigate, going as far as to insult the couple for concocting such an extravagant story. What the townsfolk don’t know, of course, is that the sheriff and his mustachioed henchman are in league with the local nuclear power plant to cover-up the disposal of several barrels of toxic waste in the surrounding forest.

Where do I begin? Attacking the performances is pointless -- these people know how bad they are, and given the script their forced to work with, I can't exactly blame them. The special effects, meanwhile, are almost nonexistent; watching the villainous roots in action is quite a sight to see, particularly during the film's chaotic, nonsensical finale. However, any movie that features a town banding together to dispose of several dozen barrels of dangerously radioactive toxic waste shouldn't be taken seriously, especially when someone like D'Amato is driving the bus. As awful as the picture is, it would probably be more fun to criticize the filmmakers for what they actually got right. When I figure out what that is, I'll let you know.

Unlike its predecessor, "Troll 3" is just a bad movie, nothing more. Extremely fun and occasionally fun to quote, but horrible nonetheless. Be that as it may, I'm happy to say I've walked away from the experience feeling satisfied, almost overwhelmingly so. Not only did I learn a thing or two about the shady, underhanded tactics used by nuclear power plants to hide their dastardly deeds, but I also have a newfound respect for lonely, proactive prostitutes residing in one-horse towns all across America. When your chips are down and a wicked batch of evil plant life is about to take over the world, you can always count on the hookers to lend a helping hand. I don't know about you, but I'm going to rest a little easier tonight.