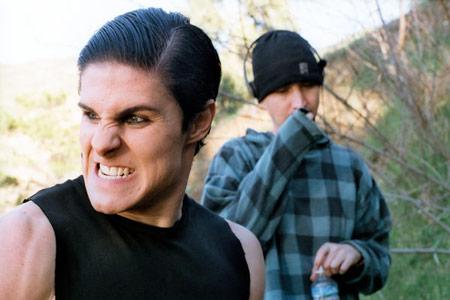 The story at the center of Jack Ketchum’s “The Lost” calls to mind true crime tales like “The River’s Edge” and “Say, You Love Satan”. At the center of these stories are charismatic and fractured Borderlines and Sociopaths who exhaust all the morally ambiguous and victimless avenues for eradicating their impotence and pain, and end up committing murder to affirm their fantastic notions of self. Where the film adaptation of ‘The Lost’ differs is that it takes a phenomenological approach to the tragic events and people at its core. We find out what is driving our central character Ray Pye, but we are also are given a chance to glimpse into the internal lives of those caught in his personal maelstrom.

“The Lost” starts with an attack on two female campers by Ray Pye (Marc Senter). Pye’s reluctant acolytes, Jennifer (Shay Astar) and Tim (Alex Frost) watch him shoot the campers and before they know it they are in over their heads. One of the campers manages to escape and the second girl dies on the scene. The escaped girl falls into a coma and Ray, Jennifer and Tim evade prosecution.

Four years later, Ray and his friends are still free when the comatose girl who survived their attack dies in the hospital. Her death re-ignites the flame of lead Detective Charlie Schilling (Michael Bowen). Schilling has long been convinced of Ray’s guilt and uses flimsy pretense to try and reintroduce himself into Pye’s life.

Pye is the assistant manager at a motel run by his mother. Schilling spends his time trying to rebuild the case against Pye. Pye spends his time selling and using drugs, chasing women and strong arming Jennifer and Tim into keeping their secret. Into this core story several of the town’s inhabitants are introduced. Each has a role to play in the final act of Ray’s story even if some of the roles are not immediately identifiable. The watchful gaze of Schilling and an under realized relationship with a tough minded high schooler named Cat, eventually force Ray’s demon side to the surface. The stories converge and the inevitable violent end to Ray’s road is reached.

I was not a fan of “The Girl Next Door”, another notable big-screen adaptation of Jack Ketchum’s work. I found that film to be flat and stagey where it needed to be expressive or raw to carry the emotions of the story. “The Lost” does not repeat that mistake. It does have portions that seem too clean and moments where the performances are less than what they should be but they are so fleeting that I feel a little nitpicky even bringing it up. This is probably because overall the performances are so good that they support a checkerboard story structure that otherwise might have been frustrating. As Ray, Senter is at times uneven instead of unbalanced; but when he’s dialed in he plays a very believable and unlikeable Sociopath.

The secondary characters, especially the women in Ray’s life, provide amazing depth to the picture as individual characters as well as the conduits for his maternally motivated animosity. Astar, Robin Sydney and Megan Henning are a vital and diverse part of the sociological landscape of “The Lost”. Each one is young and attractive, but they are people at very different stations in life. Their varying responses to Ray give the audience more context and authenticity than most horror films and psychological thrillers ever attempt to portray.

Another standout performance is Michael Bowen as Detective Charlie Schilling. Now, I’ll admit I am a Michael Bowen shill from ‘Valley Girl’ through his Tarantino work. He’s a very intuitive performer with a great sense of comic timing. Even with his great body of work this may still rank as a Tour de Force role. Schilling is a dickish and loosely principled bulldog with a great deal of unspoken transference fueling his pursuit of Ray Pye. Bowen is able to be hard-bitten, off kilter and hold our sympathies along with our disdain all within the space of a single scene. This is truly a must watch for those who have followed and enjoyed the man’s work.

Director Chris Sivertson gets a lot of credit here as well. He pulls really nice performances from his cast and manages to create David Lynch-like atmospherics that enable the viewer to forgive and forget some of the film’s shortcomings. The calculated and disorienting ambiguity of eras and environments allow this story to exist in a universe where different colloquia, geography, and music all intermingle without presenting a point of disconnection for the audience. It’s no mean feat, and it’s one of the things that has always impressed me the most in David Lynch’s work. That Sivertson understands the aesthetic and has the skills to pull it off is a huge feather in his cap.

Not so much a horror film as a psychological thriller, “The Lost” features a hardball ending and a well realized pay-off to its dread filled collision montage and checkerboard assembly. The camera work is mostly outstanding and the editing ranges from clever to seamless. The film is a display of high talent on an independent scale budget. Best of all it gives the viewer a lot of room to ponder the people involved in the story.

Ultimately Ray Pye is an empty childish monster playing at life. His victims are troubled, wayward, and fledgling; lost but endeavoring to find a life beyond their pain. This dichotomy between killer and victims creates a monumental sense of cosmic injustice. It is the same kind of injustice that resonates in us all when we are faced with inexplicable violent tragedy. That the film can echo that sense of loss allows it to rise above any shortcomings and become truly memorable and worthy.