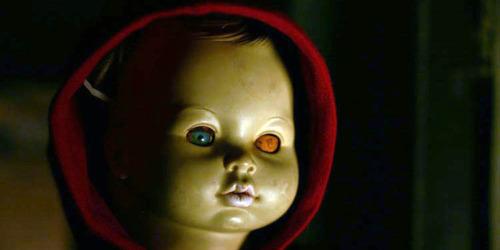 Since beginning my stint as a bonafied word monkey for BGH, I've noticed a drastic shift in my cinematic tastes, especially in terms of horror. The more I'm exposed to features from France, Norway, Thailand, Australia, and New Zealand, among others, the less appreciative I am of loud, ineffective genre films produced by the money-grubbing Hollywood machine. When I'm in the mood to be frightened out of my grossly misshapen gourd, I turn my attention to motion pictures that are, for the most part, delicately paced, heavy on the atmosphere, and stacked to the rafters with thick, ominous imagery. The closer the filmmakers come to eliciting the same response I had to Peter Medak's creepy 1980 offering "The Changeling", the better.

Writer/director Pal Oie's eerie 2009 Norwegian horror flick "Hidden" (aka "Skjult") is easily the best film the After Dark Horrorfest has released thus far. I kid you not. It's the kind of experience that reminds me why I started watching genre films in the first place. I can't recall the last time I felt the need to pull a pillow close to my face while watching a movie, never mind squinting my eyes in anticipation of a jump scare. And while some of the picture's more startling elements have obviously been lifted from other movies, it's refreshing to see something that doesn't shamelessly incorporate the popular trends of the day just to make a buck. Torture horror, I'm figuratively thrusting one gnarled finger in your general direction.

Krisoffer Joner stars as Kai Koss (also known to his friends and enemies KK), an emotionally unstable man who begrudgingly returns to his secluded, narrow-minded hometown to settle his recently deceased mother's estate. Being the psychologically-damaged product of an insanely dysfunctional household, KK is extremely reluctant to return to the place that caused him so much pain and turmoil as a child. After his attempt to burn down the joint is thwarted by an attractive policewoman who seems strangely sympathetic to his plight, our hero checks into a nearby motel and quietly contemplates his next course of action.

However, almost as soon as Kai Koss settles into his room, an admittedly strange series of events begins to unfold. If the supernatural bumps, balls, and shadows lurking within KK's former homestead weren't enough to make his visit as unpleasant as inhumanly possible, a set of attractive Norwegian teenagers mysteriously vanish while snooping around the house. Not surprisingly, local law enforcement officials -- including a nosy group of overzealous construction workers -- are quick to lay blame on the guy with the shady past. Is KK responsible for these heinous crimes? Has he completely lost his mind? Does all of this have something to do with a kid named Peter and his impromptu trip down a waterfall oh-so many years ago?

Honestly, I'm not sure. Pal Oie doesn't seem very interested in giving his audience any easy answers to the countless riddles he's posed. Most of them are of the "draw your own conclusion" variety, which may prove to be a bit of problem for movie-goers who aren't into ambiguity. For me, this isn't exactly an issue. In fact, the lingering questions and unsolved puzzles are precisely why I'm so deeply enamored with "Hidden". Oie's steady pacing gives you plenty of time to sink into the picture's insanely unnerving atmosphere, a world that appears to have been inspired by director David Lynch's cult television series "Twin Peaks". Your stay might be scary and confusing, but that's half the fun, isn't it?

Believe it or not, I'm actually quite anxious to watch "Hidden" again, that is, as soon as I can locate 90 minutes of free time to devote to the project. Pal Oie, with the assistance of a spectacular cast and an outstanding cinematographer, has assembled a truly superior horror experience worthy of countless repeat viewings. However, keeping an open mind is essential to unlocking the picture's buried charms, especially if you're expecting yet another unsavory helping of The Same Ol' Thing. Simply put, "Hidden" is a fantastic movie from start to finish, and easily solidifies Norway's position as one of the best sources for modern-day horror. If there isn't a remake in the works, there will be.