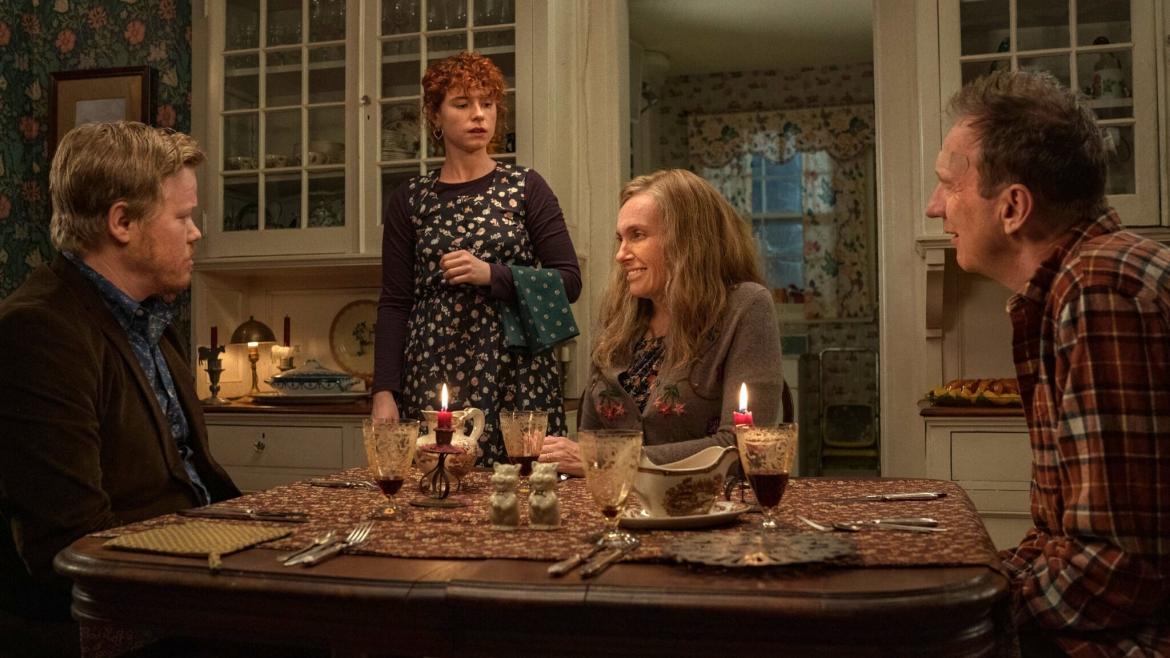 Are we slipping away? Are we repeating? Are we interdimensional time-traveling explorers untethered from the comforts of linear reality? Or are we just...here? In Charlie Kaufman’s I’m Thinking of Ending Things we hear, over narration, a repeated declaration, “...there is only one question.” This disembodied voice, much like the film’s ostensible protagonist, offers an assertion of knowledge and comprehension: there is a reason for all of this if we knew what question to ask.

Adapted from Iain Reid’s novel of the same name, Kaufman’s film opens as a young couple played by Jessie Buckley and Jesse Plemons set out on a drive through the country to meet Jake’s (Plemons) parents. Buckley’s character, however, is barely concealing her trepidation. We hear her in voiceover, “I’m thinking of ending things,” an idea so tangible Jake seems to sense it telepathically. She goes by several names throughout the film but she is credited simply as “Young Woman.” The pair pass the time talking about work, careers, goals, hobbies, poetry, and banally commenting on the bleak, bucolic landscape. Once they arrive at Jake’s family home, we’re introduced to his parents played by David Thewlis and Toni Collette. Much like the car ride in, however, information conflicts, the parents seem to change ages indiscriminately, and just what exactly is in that basement and who is this high school janitor we keep seeing?

For those familiar with Kaufman’s oeuvre, I’m Thinking of Ending Things addresses many of the filmmaker's signature subjects. The film tackles concepts of memory, identity, and perception with an assured direction that deftly manages to handle an astonishing tonal juggling act. Characters are altered or remade whole, sometimes in the matter of seconds. Jake’s parents are at once doddering old-timers, virile homemakers, and on their literal deathbeds or suffering from dementia. The Young Woman is a waitress, a quantum physicist, a film scholar, and a painter. Is she all of these? Or is she none of them? She provides us with the most accessible form of subjectivity, not just in her voiceover but also in her reactions to the events on screen. So it must be true...right? But even this is unreliable as her identity shifts as the other characters define her anew. The film is an epistemological and existential nightmare at times while at other moments it presents profound tenderness and empathy.

Similar to Kaufman’s use of stop motion animation in Anomalisa, I’m Thinking of Ending Things achieves an elegant, provocative balance of being both rooted and entirely out of time and space. Łukasz Żal’s cinematography and Robert Frazen’s editing provide an essential pivot point to all these proceedings. There are moments when the house is a stagnant, grey relic then suddenly appears a table filled with a spread of decadent, glistening food lit by a soft warm glow. Early in the film, Jake says they should come back in the Spring when they can look up at the universe. Several scenes later, as the Young Woman discusses John Cassavetes’s A Woman Under the Influence, she is framed by a rim of ice accumulating on the outside of the car. As light drifts across the windows it’s unclear if this halo of light and shapes are just the results of the weather or if Buckley’s face is nestled somewhere in a galactic nebula light years away. She’s both a person in a car trying to figure out how to let this guy down easy and a celestial entity entirely unkowable to us aside from the ways we try to make sense of it all.

In a recent Indiewire roundtable with Kaufman--and a murder’s row of contemporary directors--the first topic of discussion revolved around commentators on the internet. This conversation was related largely to how Kaurman and others perceive their work as belonging to an audience once it’s released. The conversation also reveals, however, one of the fundamental truths I’m Thinking of Ending Things is attempting to get at. The film may not be specifically about the internet and all it’s peaks and valleys, but it’s perhaps one of the great attempts at provoking an audience to consider the many, many ways we make ourselves and our made by others.