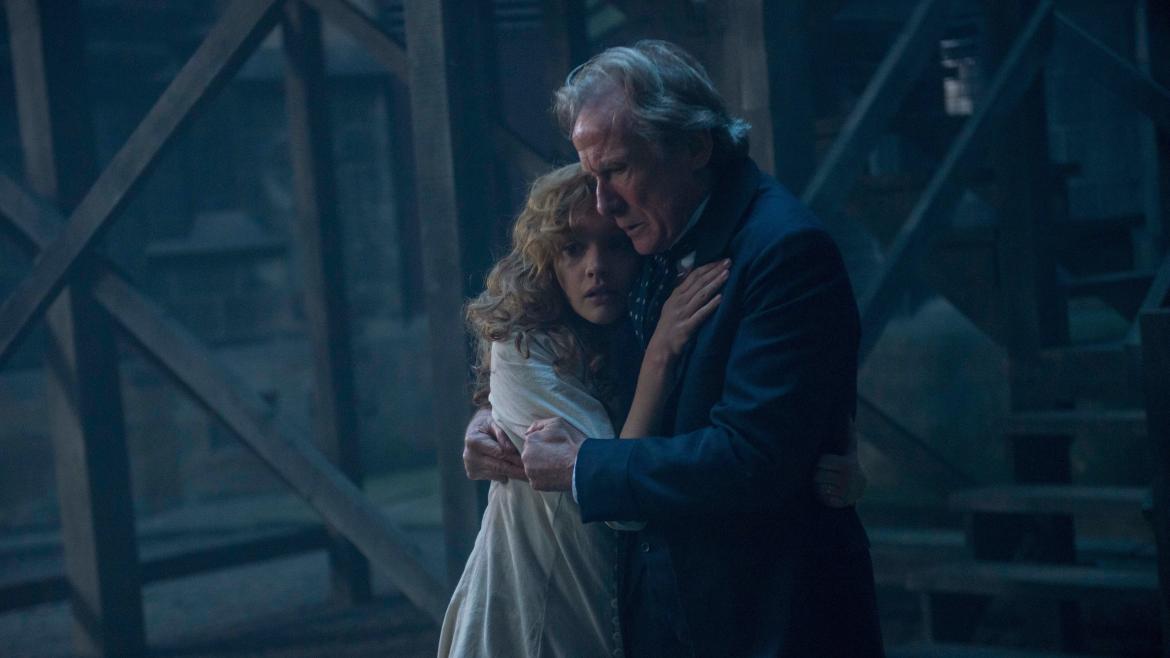 The Limehouse Golem is a whodunit with surprising social commentary amongst the classy decoupage of English theater. I don't know if it's the foggy streets of old England or the posh accents but it has earned the distinction of being 2017's most 'pinky out' horror film.

Set in Victorian London where a series of gruesome murders has shaken the community of Limehouse, sassy detective John Kildare (Bill Nighy) is assigned to the case which collides with the murder trial of Lizzie Cree (Olivia Cooke). Lizzie is accused of poisoning her husband, John Cree (Sam Reid) who is also a suspect in Kildare's Golem investigation. Convinced he's been given a case he can't possibly solve in a timely manner Kiladare works against the clock to not only reveal the Golem's identity, but also save Lizzie from the business end of a noose.

From the word go, the movie aims to tickle the senses of period piece cinefiles, particularly the brand that festishizes dark murderous affairs like various Jack the Ripper iterations. The Victorian window dressings are lived in and authentic--perhaps to a fault. At times the theater of it all feels overplayed and unfolds at a breakneck pace front loading the first half and leaving the final third to flail through foreshadowed twists that leave a bland lasting impression.

Admirably performed yet lacking in anything particularly notable, The Limehouse Golem ushers in an intriguingly gothic sensibility to your typical whodunit scenario. Utilization of audio tricks when playing out passages of the murders final diary entry with each particular suspect provides a delightful macabre factor amongst the ongoing investigation. Bill Nighy is dedicated to the bit of the potentially homosexual investigator, never overplaying to the point of offensive, but giving the character's mannerisms a subtlety becoming of the proper English setting.

The Limehouse Golem unapologetically bows to the solemn hum of its own violin--bringing an artistic integrity to a typically shallow and meta sub genre. However proper and artistic it wants to be there's a violent grimness at its heart that never has a chance to breathe on its own and therefore doesn't quite have the lasting power shared by other films of its ilk. For all its posturing the film doesn't earn the standing ovation it's going for.