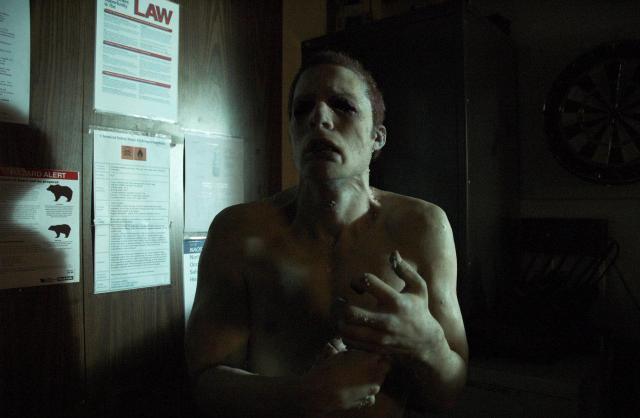 “The Last Winter” borrows its setting from one of the greatest horror movies ever made while its plot is virtually identical to that of one of the most notorious critical flops of recent years. To be fair, “The Last Winter” predates “The Happening” by two years but it brings to mind Shyamalan’s unintentional cheesefest as much as it does John Carpenter’s “The Thing.” It never approaches the extreme highs or lows of either movie but instead remains firmly in the center as a very well-made if slightly snoozy environmental thriller.

The film takes place in the very near future (the day after tomorrow, maybe?) when the Alaskan National Wildlife Reserve has been opened up for oil exploration. A team of oil company engineers led by a typically gruff Ron Perlman are relieving an ill-fated earlier team, but can’t proceed with building the necessary ice roads because of unseasonably warm weather which is melting the permafrost. The team’s resident environmentalist (James LeGros) who was hired mostly for PR reasons suspects that something isn’t right, particularly when another team member begins having visions of figures on the horizon and is eventually found dead, clutching a video camera containing footage of what looks to be the strange creature responsible for his death.

The bleak snowy landscape of ANWR (played by Iceland in the movie) goes a long way to playing up an atmosphere of isolation and helplessness in an inhospitable environment where man’s survival is dependent on beating the elements. There are many stunning scenes of people trudging through a pure blank white space that looks both empty and unwelcoming. Much of the horror here is of the psychological kind and fortunately the film has a strong cast able to convey the loneliness and hardships that come with survival in the blistering cold of the arctic circle.

The supernatural elements are where the film falters and never really regains its balance. The problem is that it tries to tiptoe the line between the psychological and the supernatural and never commits to either one. Without the addition of the creatures who show up in the third act, the film could have been an interesting debate about environmental ethics set in a harsh landscape. With more of a focus on the creatures and the other horror elements, “The Last Winter” could have been a well-made conventional horror movie with an interesting premise and setting. As it is, it’s too talky and not scary enough to succeed as a horror movie and more traditional cinephiles will probably switch off when the poorly animated CG moose-bug creatures show up at the end.

Scratch that- pretty much everyone but the most low-standards-having-SyFy-Channel-watching fanboy will switch off when the creatures are revealed. Bad CG is a sticking point around these parts but the CG in “The Last Winter” is some of the worst I’ve seen outside of Z-grade, homemade schlock. The monsters aren’t just poorly animated, they’re poorly designed.

It’s beyond me how the protectors of Mother Nature end up looking like the bugs from “Starship Troopers” with the head of a moose. It looks as ridiculous as it sounds and reduces any potential emotional impact of the end scenes into unintentional camp. Even worse is the decision to make them ghostly and semi-transparent which only makes them even less believable. You know the old saying about how it’s scarier to never see the monster? That goes doubly so if your monster looks that bad.

Another problem with the movie is that the ending basically fizzles out. There’s no climax or major conflict at the end and many people will be left in their seats thinking “Is that it?”. There is a tacked on “Twilight Zone”-style coda which I found more interesting than anything from the third act. Maybe I’m just a sucker for post-apocalyptic movies but I would have preferred for the whole movie to be compressed into the first act so that we could have explored the world introduced by the coda in more depth.

Ultimately I was left disappointed with “The Last Winter”. There was clearly a lot of talent both in front of and behind the camera but it never quite congealed into a good movie. It should be given credit for being an environmental message movie without ever seeming preachy or didactic – in fact, it almost does too good a job in that Ron Perlman’s character, who represents the pro-drilling mindset, is often more likeable than the environmentalist hero character. Разнообразие в постели подталкивает на постоянные поиски новых партнеров, но проститутки не являются лучшим вариантом – тогда идеальными являются секс знакомства , которые созданы для уверенных в себе людей, целеустремлённых и свободных от предрассудков, выбирай партнера и договаривайся о встрече уже сейчас!

If you are a fan of mood and atmosphere and can put up with ugly CG then you might find something to like here. If, however, you come into “The Last Winter” expecting a traditional monster movie you’ll probably come out feeling like you’ve just watched the highest-brow movie ever made for the SyFy Channel.