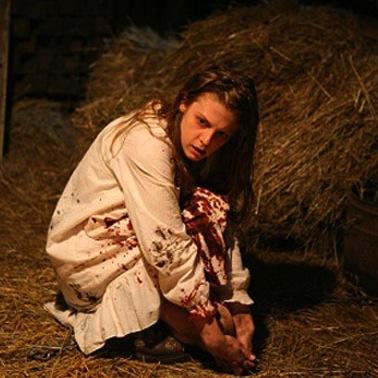 Daniel Stamm, director of "The Last Exorcism," must have missed the Hollywood-wide bulletin that 3-D was the new gimmick of choice for genre filmmakers. In "Exorcism," Stamm instead turns to first person perspective to weave his tale -- a choice that is just so 2008. Luckily, it's also a choice that helps make a small, low wattage horror movie more than the sum of its seemingly pedestrian parts.

"The Last Exorcism" works to establish authenticity for its narrative direction straight out of the gate. To do this, the film opens as a two-person documentary crew first meets Reverend Cotton Marcus. The Reverend (Patrick Fabian) quickly reveals himself to be a deeper and more interesting character than anyone may have guessed. As the son of a Southern evangelical church leader, Cotton has been brought up in the church -- where he was preaching before he'd even hit puberty. After a life spent thrashing around in the deep end of the religion pool, Cotton has decided that he's ready to fully move on, and he wants to do so by first exposing the fraudulent and dangerous practice of performing exorcisms.

Through the cameraman's lens, we get to meet Cotton's family and hear his story of religious searching and growth. The character, who could have easily become a stereotype, only grows in complexity and depth through the first act of the film. His mission, which crystalizes around one of the hundreds of pleading requests he receives to perform exorcisms, also grows and changes as Cotton and the crew set out. At first the case appears straightforward: Cotton will go in, give him his song and dance, and the crew will get its behind-the-scenes expose of the exorcism. But as Cotton and the filmmakers are drawn into the lives of a disturbed family things begin to slowly unravel.

Much to his credit Stamm also succeeded in finding believable and strong performances for the roles of the family members. These characters do not have quite the depth of Cotton Marcus, but they also easily could have been played as broad stereotypes. While they do trend toward the "Southern evangelical" type, the Sweetzer family is portrayed with enough nuance to keep them interesting. The same can be said for the film as a whole as the real success of "The Last Exorcism" comes in providing just enough nuance around what is otherwise an extremely generic demon possession setup. Little touches, like Cotton describing the methods he uses to fool those paying for an exorcism, elevate the film above what it might have become in lesser hands.

However, while the film succeeds in many places that it may have failed, it also fails in many places that could have been easily remedied. Pacing, though, not a major disaster, definitely is a weak point for "The Last Exorcism." This shouldn't surprise, as the faux documentary format does not naturally lend itself to snappy scripting. Even more unnatural was Stamm's decision to use non-diagetic sound beginning near the film's midpoint and into the climax. This is particularly unforgivable because the director went to great lengths early on to create a realistic look and feel for his first person perspective. The decision to break with this can only be attributed to a desire to ratchet up tension, and is regrettable because the film had done an admirable job of creating tense and even frightening scenes up to that point.

Through its final act "The Last Exorcism" maintains an air of mystery, which lingers even at the film's conclusion. Though this uncertainty may provide more fuel for some viewers, it also serves to limit the catharsis that usually comes with the close of a genre film. The film's final moments stand as one final interesting choice by a director who made a number of them. In many ways, "The Last Exorcism's" biggest success comes in not failing, particularly on what was obviously a tiny budget. Many times that kind of statement can be dealt as faint praise, meant to damn. Here though, the praise is genuine. There's nothing truly damnable about "The Last Exorcism."