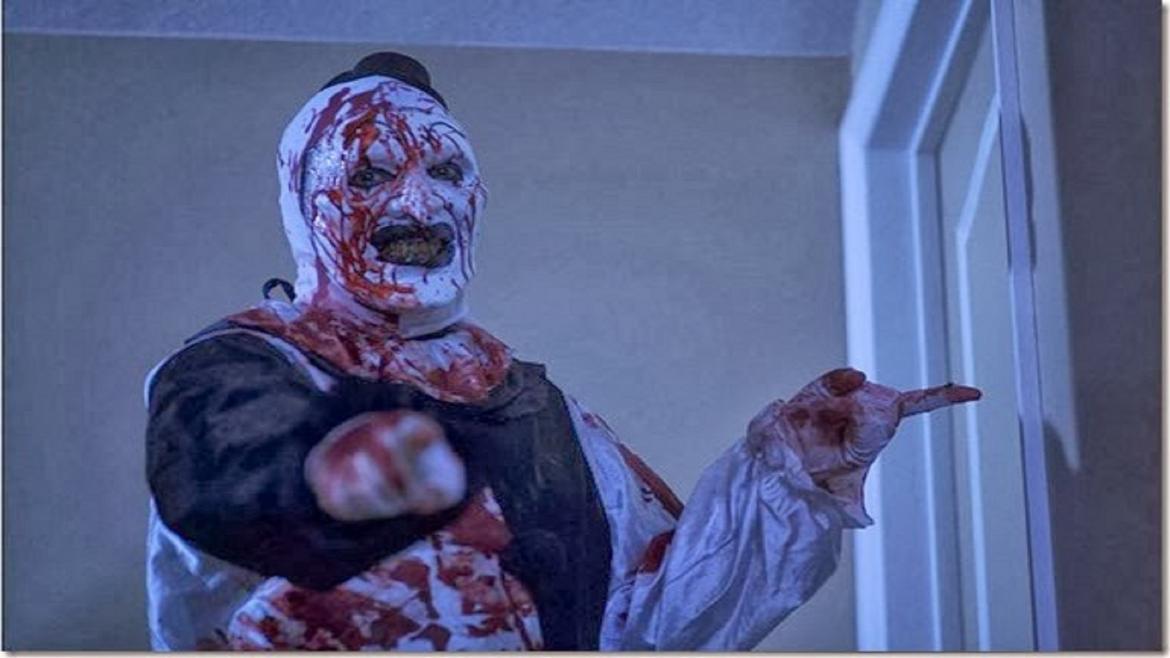 Originality is a rare commodity found in films. When it comes to horror, it can take decades before a film emerges that has a fresh approach on how to terrify. Most of the time new releases follow the successes of the past like the slasher, found footage, and possession crazes. However, creating a movie that incorporates existing themes and ideas can still be effective if done in a creative and stylistic way. Take one part John Carpenter’s “Halloween”, the anthology theme of “VHS”, the heart of the slasher genre, and out comes the indie “All Hallows’ Eve”. Although it takes inspiration from previous films, “All Hallow’s Eve” manages to splash enough style and good taste into one film to be an exciting homage to what horror fans love.

The story is as follows: a young woman named Sarah (Katie Maguire) is babysitting two kid siblings, Tia and Timmy, on Halloween night. Returning home from trick or treating, the kids look through their candy bags when Timmy discovers a blank VHS tape resting in the midst of his collection. Pleading with Sarah to watch the tape, Timmy and Tia eventually get their way and the movie transitions into another movie through the form of the blank VHS tape. On the VHS, there are three separate stories involving young women being terrorized by a man in a clown costume. The first follows a woman abducted by the clown and placed in an underground lair inhabited by demon worshipers. The second tells of a woman unpacking her new home out in the deep woods. Her husband still at work, the woman begins to feel uneasy as a mysterious crash outside causes the power to cut out. The final story shows a woman traveling through a back road after finishing work as a costume designer on an independent film. At a lone gas station, she encounters the clown from the first story and tries to escape from his clutches. During the viewing of the tape, the film cuts back to Sarah and her situation in the house. By the end, the point of the tape and clown become apparent to Sarah, and she is forced to come to grips with the horror emerging around her.

Clearly the title of “All Hallows’ Eve” evokes the inspiration of “Halloween”. The set up of a babysitter watching two young children automatically confirms the similarity. The introduction of the VHS tape does however, take it down a different road. Unlike the anthology found footage style of the film “VHS”, the side stories in this film are all shot in a different style. It’s an effective choice to shoot each of the three stories as an actual film but give each a different tone and feel. The clown character is central to all three but each harken to a specific genre. The first feels like a possession film with dark lighting and stark color differences as the story progresses. The second definitely depicts itself as a sci-fi thriller, and the last shot as a grindhouse slasher. The first and third are very well shot, acted, and directed. The second became very goofy due to the some of the make up choices and acting chops, but it didn’t ruin the film overall. Having the main storyline of Sarah wrapped around these separate stories keeps a nice pace throughout that doesn’t let up. It keeps the feeling of the unknown fresh since the question of why the tape is in the house is not answered until the end. The ending itself makes the entire film worth the viewing overall. It also has to be noted that the run time is 90 minutes; a great length to feel like a movie but not too long to need filler scenes to stretch out its run time.

The strongest part of this film rests upon the clown character. Shot after shot of him pacing back and forth in the stories truly drives the fear into the entire story. He seems to be involved in all three stories but for reasons unknown until the finale. There have been countless attempts at making a terrifying clown character and this movie hits the nail right on the head. The stark white face make-up and outfit with accents of black and navy on his face just screams "this guy is NOT someone to mess with". And yet, they manage to make him approachable and interesting, almost like what Freddy Krueger would be like as a clown. The composer trickles in different themes relating to each of the stories that have a nice early 1980's horror vibe. It makes the modern filming style feel well worn and interesting.

Overall the film is a great picture of the best parts of the horror genre. The clown character is fantastically creepy, and without spoiling the twist or ending, the film utilizes this character to leave you with an unsettling feeling. There are countless copycat films that come out promising a fresh take on the sub genre (and fail!), but “All Hallows’ Eve” actually does deliver a new approach that keeps the viewer interested and consistently creeped out. It does contain some questionable acting and goofy make-up choices, but the heart and joy that went into the creation is apparent. Written and directed by Damien Leone, “All Hallows’ Eve” is a nice nod to horror fans across the generations.

Howling II: Your Sister is a Werewolf