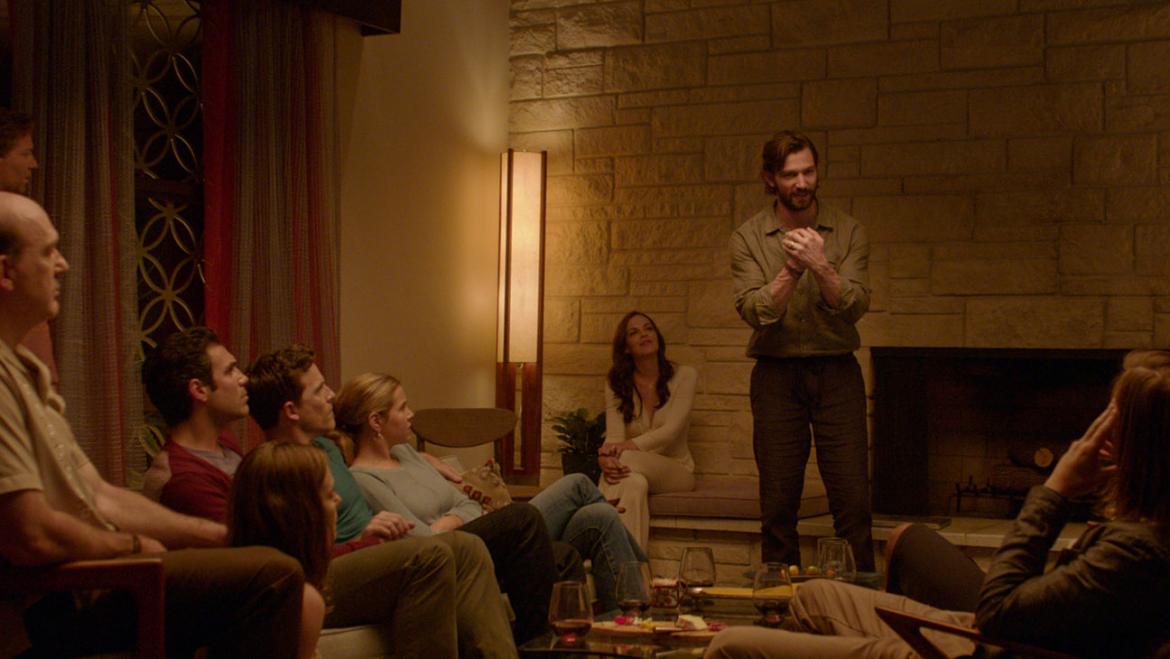 Welcome to the most awkward dinner party ever; where grief and paranoia are served on a silver platter. Karyn Kusama trades in the frustration of studio interference with a little indie exercise and expertly woven tale in, The Invitation. Coming from the word smiths who brought us monumental duds such as Aeon Flux, Clash of the Titans (remake), Ride Along, Ride Along 2, and R.I.P.D. it might be a stretch to convince anyone of the strength in the script here, but Kusama spins Phil Hay and Manfredi's words beautifully. Continue reading with caution, as even though there will be no spoilers, the less you know about The Invitation going in, the better.

Everyone, as the say, handles grief in their own way and there is in fact no wrong way to grieve. That is unless you ask Will (Logan Marshall-Green), who has accepted an invite to a dinner party to his former home where his ex-wife Eden (Tammy Blanchard) lives with her new lover David (Michiel Huisman). The couple has invited not just Will, but a handful of their closest friends seemingly to catch up after having disappeared for the last two years. Will, however, has not yet healed from losing he and Eden's son years before which caused their relationship to crumble. The night seems harmless enough, but the awkwardness of it all suddenly turns into suspicion that Eden and David have other plans for their guests.

Paranoia and misdirection play key roles in Kusama's taut thriller. The filmmaker wants you to feel uncomfortable and achieves that wonderfully in multiple ways. The tension between Will and Eden since Will inherently disapproves of Eden's newfound way of coping with their loss or the fact that the friends have all lost touch due to various personal tragedies and life events. None fill the room with more discomfort than a taboo twist on the game "I Never" to "I Want," which kicks off a whirlwind of conflicting points of view to what exactly is happening at this party. One thing always remains certain...something isn't quite right.

We as the audience experience the film much like Will does throughout the movie. There are red flags everywhere signaling that something is amiss. We don't know what, we just have the feeling- plus it's a genre movie, so that is generally a key that something will happen at some point. The slow build of tension is carried wonderfully on the shoulders of Green's performance. The man is clearly broken and it's only a matter of time before something pushes him over the edge, but it's never as clear if he is the looming threat or if his hosts are manipulating everyone around him- until of course it's made abundantly clear.

Green is just one of many great performances though, his just happens to be front and center. Familiar faces abound, but no true star power to pull one from the story at hand. Kusama dangles bits and pieces of the last piece of pie in front of us just to lead us where she wants to go and whether or not you bite is entirely based on your taste preferences. The mounting tension is enough to warrant the chase, but it's the payoff that might test the audience's palate.

When all is said and done The Invitation is a film you'll want to revisit to try and pick up on any clues you might have missed along the way. Once things go downhill, they do so in a hurry and in a way that isn't impossible to see coming, but enriches the experience that lead up to it. The film wants to be a powerful expression of grief, but also a breathless thriller and it's tempting to say it can't have it both ways yet it succeeds at both to varying degrees. The Invitation is an experience worth checking "YES" on your RSVP card- plus one is optional.