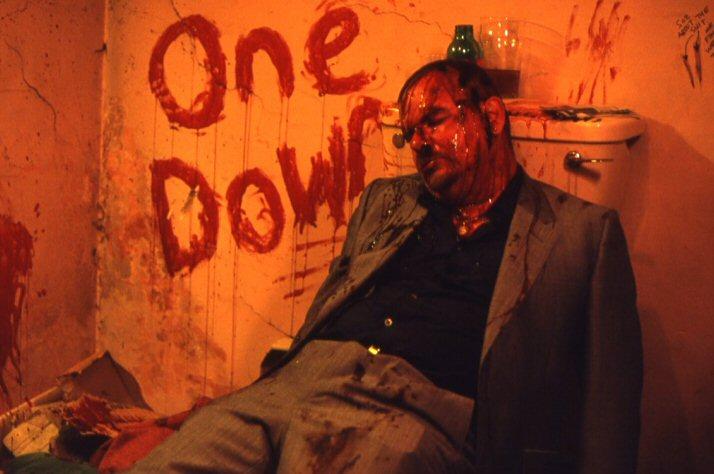 Paddy Considine is one of the better actors that you’ve not heard enough about. “The Bourne Ultimatum”, “Cinderella Man”, “Hot Fuzz” and the fantastic “In America” are all places where you can sample his work. He has a presence that commands the screen without blotting out the other characters, the story, or the situation. Considine disappears into characters without losing his own unique persona and charisma; because of this he subsequently becomes a victim of his own double-edged talent. Even after some big films his name still rings few bells outside of the UK.

“Dead Man’s Shoes” is a low-fi revenge tale that follows Richard a freshly discharged British soldier. He has returned home to find that his brother Anthony was repeatedly abused by group of drug addled losers who befriended him during Richard’s absence. Through a series of strategic robberies and phantom-like appearances Richard introduces himself to the group making it known that he intends to do them harm. The thugs begin to unravel and wrestle with how to address the situation. Their fear turns to terror when one of their compatriots turns up dead during a house party. The gang decides to hunt Richard before he picks them all off. They are ridiculously overmatched and Richard’s hunger for vengeance is formidable. He preys on the hapless crew until he experiences an unanticipated crisis of conscience.

“Dead Man’s Shoes” is stripped down and raw, eschewing fancy kill set-ups for more plausible depictions of violence. Director Shane Meadows manages to yoke the viewer with melancholy and pull moments of humor from the disquieting storyline that he and Considine penned together. The characters, outside of Richard, are non-complex but still infused with enough humanity to inspire the viewer to question their fates. In fact the film does a good job of posing a great many questions, some of which are answered in its finale.

The questions that linger can be seen as sort of acid test for the determining what kind of film fan you are. Those who prefer detailed motives and pathologies may walk away from “Dead Man’s Shoes” with a sour taste. On the other hand if you can get behind the idea of “The Man with No Name” revealing a small corner of his soul it is possible you will admire the choice of endpoint. What is less a matter of taste and more a matter of efficacy is the manner in which the back-story is etched out through flashbacks.

Way back when a friend and I were sitting in class watching some film that our teacher felt was important to our learning process. At one point in the movie there was a flashback sequence rendered in sepia tones. The teacher felt it necessary to praise the filmmaker for his/her choice of Sepia to express a bygone time. My friend leaned in and whispered,

“It’s great because… the past was yellower.”

To my way of thinking, black and white, sepia and scratched film filters should be done away with as ways to represent the past. In most cases they feel like the editor’s equivalent of superfluous expository dialog. Hell, I’m even open to starting the flashback in B&W and gradually saturating it, but please stop underestimating my average intelligence by hitting me over the head with the same old hammers.

Obviously this rant applies to “Dead Man’s Shoes”. Here the past is B&W with scratch filters and to my way of thinking it is no coincidence that these are the weakest portions of the film. Если тебя, как и меня возбуждает секс с пьяными девицами - значит нам будет о чем поговорить. The flashbacks are predictably timed and over utilized as emotional draw-ins, the framing is subpar in many of these segments, the impact is middling and the performances are undermined. This is a significant disappointment given that much of the film’s disturbing material is revealed in these sections. Perhaps the biggest sin of these passages is that they are the spaces where the film’s tiny budget is most in evidence. I love small-money cinema, but the production value should be consistent throughout to avoid pulling the audience away from the story.

Even with this annoyance, Paddy Considine’s fearless turn as Richard and the film’s quirky downbeat spirit manage to make “Dead Man’s Shoes” a worthwhile watch for most people. It’s a low-budget, art-house stalk'n’slash with a sprinkling of soul. The soundtrack is good, filled with some sizable names, and well suited to the tone of the picture. This movie may or may not stick with you long after viewing but hopefully its lead actor will. That said, for Considine’s best, I would suggest you rent “In America” before you venture into “Dead Man’s Shoes”.