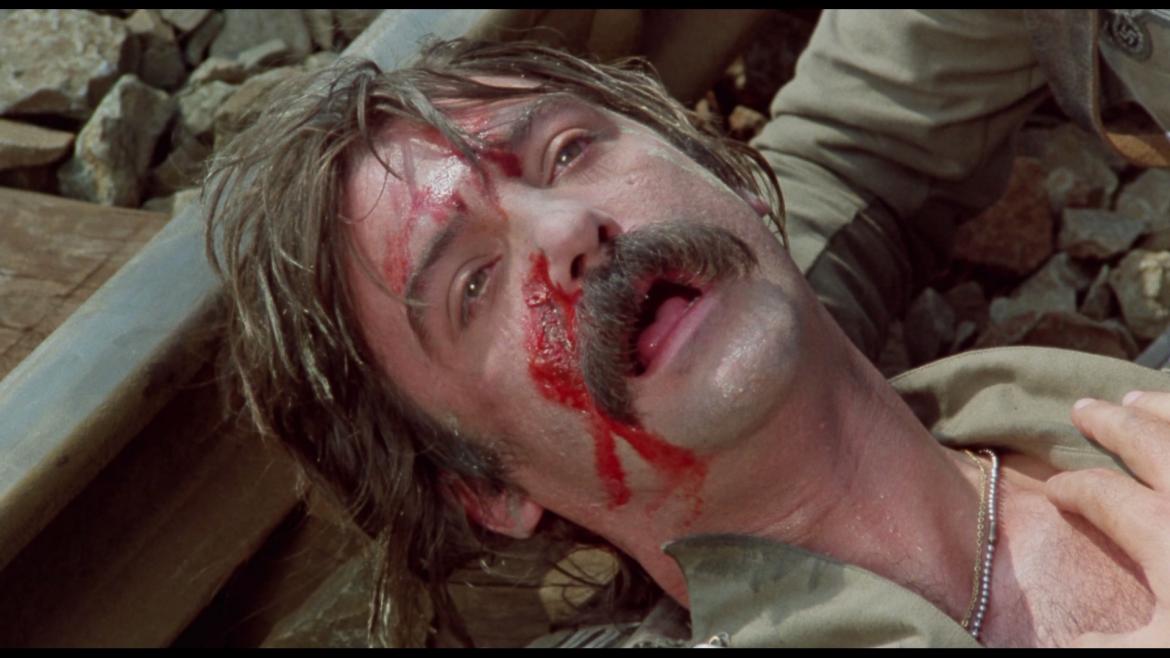 In 1967 Robert Aldrich delivered a war film that managed to succeed financially despite a growing tide of anti-war sentiment among the American populous. The film featured a formidable cast including Oscar winner Ernest Borgnine, Lee Marvin, Charles Bronson, Donald Sutherland, and Jim Brown amongst others.

The formula was a marriage of strong, violent action, social commentary and a storyline that focused not on a group of square-jawed John Wayne mock-ups but instead a gaggle of military reprobates. The group of irredeemable criminals is offered a chance to change their fates (a suicide mission) . They carry out their duty and by the end of the film the audience is left to ponder how war affects the value systems of everyone involved. “The Dirty Dozen” caught the public interest due in large part to the strong trend of anti-hero protagonists that was developing in world cinema. That was 1967…

In 1977, the Italians were proving themselves to be formidable forgers and unrepentant usurpers of ideas from their own cinematic trends as well as those of the American movie industry. So it should surprise no one that after the success of “The Dirty Dozen” the Italians dove headlong into their own set of anti-hero war movies. Films like “Five for Hell”, “Dirty Heroes” and “The Dirty Two” were released within a couple of years of “The Dirty Dozen” and managed to capitalize on the popularity without improving upon the original idea. “Inglorious Bastards” by Enzo Castellari came a full decade after the beginning of the cycle, and despite having many more years to tweak and hone the formula it also failed to break new ground.

The story follows a group of American Military prisoners in occupied France who are on their way to court-martial when their convoy is ambushed by a German patrol. The prisoners manage to survive, steal the truck and head for Switzerland. The lone officer among the men, Lt. Yeager played by Bo Svenson takes charge of the group. After a series of gun-battles with German soldiers, the troop encounters and mistakenly kills an elite American strike force that is slated to carry out a raid on a German train. Our heroes masquerade as the strike force and meet up with an arm of the French resistance who take them to rendezvous with the American Colonel in charge of the train strike. Initially Colonel Buckner promises them their court-martials as originally planned, but after they prove their mettle in battle he allows them to undertake the attack on the train.

All of the necessary comparisons acknowledged, “Inglorious Bastards” is nowhere near as entertaining or rewarding as “The Dirty Dozen”, and that’s okay. The film belongs to a bygone war movie era where action and fun were prized over reflection. In fact, the only portions of the movie that fail outright are where social commentary is needlessly injected. When director Enzo Castellari loosens the reigns and gives into to the film's shoot-em-up strengths, the proceedings become a series of goofy delights.

The characters are thin but Peter Hooten as the cocky, racist Tony, and “The Hammer” Fred Williamson ("Black Caesar", "Hell Up in Harlem", "From Dusk ‘til Dawn") as the ass-kickin’, redneck killing Private Canfield steal the show performance wise. As an aside, in order to capitalize on the popularity of blaxploitation movies the film was re-cut then re-titled for some markets as “G.I. Bro” and carried the tagline “If you're a kraut, he'll take you out!”

Unfortunately, due of the ineptitude of its villains “Inglorious Bastards” manages not a split second of tension during its 99 minutes. No matter though, what it lacks in suspense it makes up for in humor and poor execution. Whole sections of the movie could easily have been dropped into the middle of an episode of “Wonder Woman” and no one would have been any wiser. Where the movie isn’t reminding you of the dangers of flat lighting it is daring you not to laugh at its seem-riddled blend of matte paintings, scale modeling and live action.

Another big plus is the stunt work which is actually quite good. The highlight is “The Hammer” doing his own jump onto to a moving train. Further positives: an unmotivated frolic with bawdy Bavarian water nymphs, multiple slingshot kills, and the movie’s best line where an eagle-eyed SS soldier looks out the window then alerts his comrades to the possibility of trouble"“Inglorious Bastards” is not a good watch for those who can’t check both brain and era-bias at the door. Fortunately, the traditional Italian overdubbing and uninspiring first combat sequence should be all you need to determine if you fall into that category. If you do, and you need an escape from films that take themselves too seriously, this ain’t a bad ride.