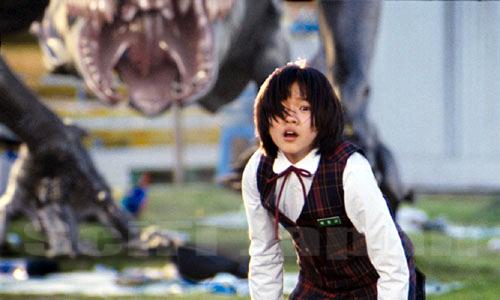 Some months ago on the podcast when we reviewed Chan-wook Park's "Thirst," we remarked that South Korean filmmakers have a knack for taking common horror film concepts and spinning them in a way that's just different enough to make them stand out. In this tradition, 2006's "The Host," directed by Bong Joon-ho, manages to take the common monster movie framework, and craft it into a family-focused drama with hints of comedy and satire. Oh, and it also features a gigantic catfish monster with legs and a prehensile tail.

"The Host" opens in ominous fashion with a scientist ordering one of his subordinates to dump formaldehyde down a drain, despite knowing that it would end up in the Han river. Years later, there are numerous sightings of a strange amphibious creature, which is hidden from the viewer until much later. Eventually, we are introduced to Park Gang-du, a bumbling father who runs a snack shop with his father. After some amusing exposition focusing on Gang-du's relationship with his daughter Hyun-seo, the focus shifts to the crowd around the Han river, where a now gargantuan monster is seen first hanging off a bridge, and then dropping into the water. At first, the crowd taunts the beast by throwing garbage into the water to "feed" it, but the jovial scene quickly turns violent and chaotic as the beast takes to the land, devouring nearly everything in its path. In the midst of the chaos, Gang-du ends up losing track of his daughter, and witnesses her being whisked away by the creature. In mourning his daughter's apparent death, Gang-du is reunited with his sister, a famous archer, and his brother, an unemployed college graduate and backyard revolutionary, who after a bit of quarreling, find out that they are suspected to be "infected" by a rare virus carried by the creature. What follows is a rewarding and complex tale that follows this splintered family as they try to escape their new found capture to find Hyun-seo, dead or alive.

It becomes obvious very early on that "The Host" is a very different kind of film. It is at times light-hearted, at times scary, and at times very bleak and harrowing. In the tradition of the best monster films, "The Host" is less about the creature itself and more about the reaction to the creature. At its core, this film is very, very ambitious, and manages to dig into the heart of familial relationships, mob mentality, paranoia, and government interference in a way that doesn't feel forced and helps to develop deep emotional investment. It also, for the most part, manages to move at a steady clip through its initially intimidating two hour run time. At times, it almost feels too ambitious and far reaching, especially as Joon-ho tries to quickly tie together all of the film's loose ends in the last few minutes. It's very hard to discredit it for that though, because there is so much here to love here.

Although much of the strength of "The Host" has little to do with the monster, it deserves to be said that the creature effects range from passable to brilliant. The size, power, and dexterity attributed to the monstrosity create tangible tension in ways that few modern monster movies do. There was also great care taken to ensure that the interactions between the monster and the environment felt real, especially as it relates to the destruction of nearby property and its entrances and exits from the river. In this modern era of horror cinema, it's hard to find a monster flick that doesn't provoke at least some eye rolling on the part of the viewer, but at every turn "The Host" excites and amuses and manages to avoid the pitfalls of dodgy effects that remove you from the experience.

As a horror fan, I feel as if I've failed myself by not seeing "The Host" sooner, especially considering that it made a theatrical run in the US after becoming one of the highest-grossing Korean films of all time. Rather than being a one-note film, Bong Joon-ho has crafted a horror experience that can be all things to all viewers. If you've previously made the mistake of skipping over this film in the past few years of horror viewing, I would implore you fix your mistake as I did, and hang your head like I did knowing that when it comes to horror films lately, anything we in the States can do, South Korea can do it better.