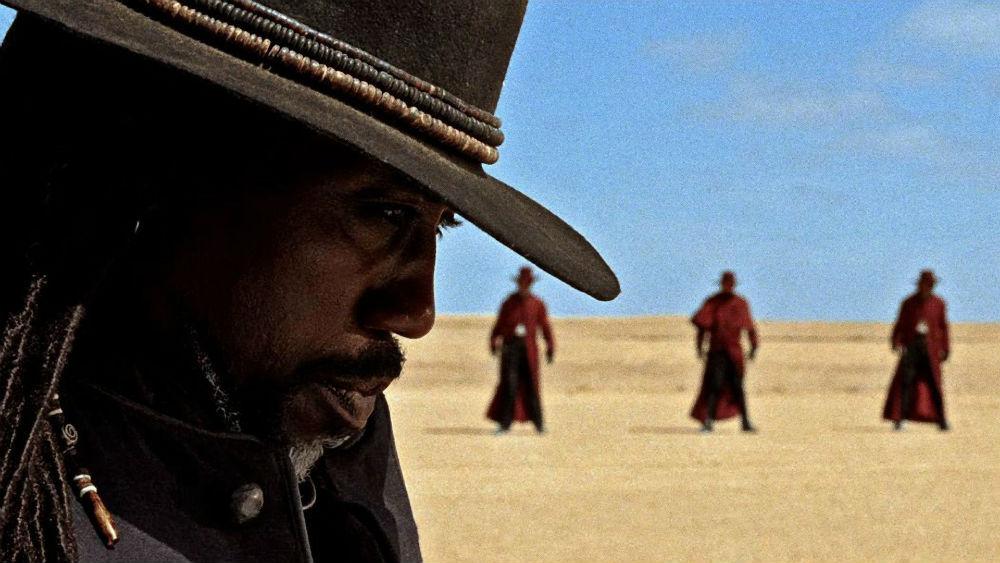 The Western and horror genres are two that would seem to go together well, but the movies that mashup those styles that date back to the early days of film - let alone do it successfully - are few and far between. Gallowwalkers attempts to do just that, with some plusses and several minuses.

Production on Gallowwalkers began before star Wesley Snipes ran into tax trouble and was completed after he put those problems behind him. Snipes plays a gunslinger named Aman whose love was raped and murdered by bad guys, who Aman then murders. The bad guys somehow return as the undead who, for some reason or other, have to kill other people in order to wear their skins. It’s hard to tell exactly because the script is a mess. Aman rescues an outlaw along the way who helps him to exact his revenge for the second time. That’s about it as far as the plot is concerned.

Gallowwalkers has a couple of things going for it. Considering it’s a direct-to-video production with a sub-$20 million budget, it looks great. Director Andrew Goth definitely has a cinematic eye, and does an excellent job of creating a classic Western vibe making use of beautiful desert vistas while sprinkling in some clever camera angles and visual tricks. And Snipes has lost none of his action hero charm. He fits right into the old West and looks cool decked out in red and black gunslinger garb. Beyond those two points, there’s not much else to really latch onto. The rest of the acting is passable, but seems off. Much of the dialogue has been dubbed or recorded later and has the feel of a ‘70s Italian giallo; I expected some of the actors to be foreigners who couldn’t speak English, but this was apparently a US/UK production. There’s a good bit of gore, with Aman ripping off the heads and spines of his victims Mortal Kombat-style, as well as many shootings which are to be expected in a Western. But, much like many modern horror films, the gore is ruined by overuse of CGI blood. Those points could be mostly overlooked, but the number one problem with the film is that it’s dull. Not a lot happens that is exiting or even interesting. At a scant 90 minutes, it’s still a slog to get through.

It would be nice to see more Westerns with horror elements as it’s a natural fit. Unfotunately, Gallowwalkers doesn’t scratch that itch. It’s by no means terrible, and you may enjoy it if you’re a big fan of Wesley Snipes or just love Westerns. General horror fans, however, will probably want to skip this one.