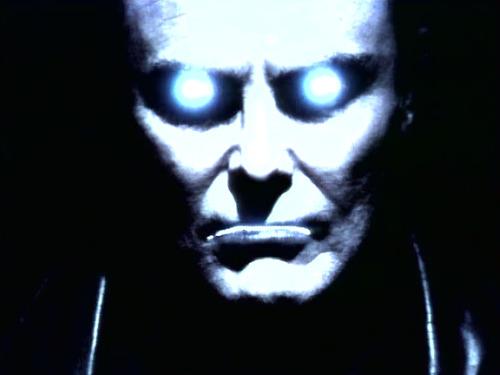 Believe it or not, I'd been searching for a halfway decent copy of writer/producer/director Douglas Schulze's gory psychological horror outing "Hellmaster" for several decades. This obscure title has proven to be rather elusive; none of the video stores in my hometown carry a copy, and locating the DVD edition of the film is next to impossible. Unless, of course, you're willing to shell out an ungodly amount of cash on either the Amazon Z-Shops or eBay, which I most certainly am not. After a fair amount of patience and a lot of dumb luck, I happened across a worn VHS tape at a local flea market for one whole dollar and two shiny quarters. Unfortunately, I think I may have paid too much.

"Hellmaster" is a total disaster in every way imaginable. If the clunky acting doesn't cause your skin to melt off the bone, Schulze's inability to tell a concise, coherent story probably will. It's a technical nightmare, a poorly-scripted, impossibly stupid foray into pseudo-intellectual horror. Had the film actually been entertaining, even unintentionally so, none of this would have mattered. I would have walked away a happy man, and life would have blossomed. Unfortunately, outside of a few memorable lines and some interesting creature designs, "Hellmaster" is an utterly charmless affair. And, yes, I'm a little bitter.

The story is remarkably dumb, and if you can decipher the specifics, you're a smarter, more attractive individual than myself. Here's what I've managed to unravel thus far: Professor Jones (John Saxon) is turning homeless people into mindless zombies for reasons beyond my limited comprehension. Years after his radical experiment ends in complete catastrophe, he returns to the Kant University campus to finish what he started. To assist him in his unstoppable quest to turn everyone into murderous monstrosities, Jones has assembled a veritable rogue's gallery of hideously deformed henchmen. The ugly bald kid with the cross carved into his forehead is definitely my favorite.

I like brainless, indecipherable messes as much as the next translucent shut-in, but “Hellmaster” is a bit too slipshod and erroneous for even my grossly indiscriminate tastes. The pacing is unnaturally slow for a movie that runs only 90 minutes, and the needlessly confusing plot and those drama school performances definitely aren't helping matters any. Trying to figure out the inner workings of Professor Jones’ scheme to transform the entire college into unattractive ghouls grows tiresome in no time flat, especially since Schulze doesn’t seem to care whether or not you can make sense of the story he’s attempting to tell. Sobriety, in the case, was probably working against me.

It’s a shame, really, that the picture is nearly unwatchable, as it sports some genuinely interesting creatures. In addition to that freakish little kid with the crucifix burned into his face, we’ve treated to the psychotic stylings of Razor Face Bobby and Mama Jones, the latter of whom is portrayed with loving grace by The Stooges guitar/bassist Ron Asheton. They’re both great villains that deserve a much better vehicle for their peculiar brand of madness and mayhem. The special effects, including some very juicy kills, aren’t half bad, though most of them are obscured by shadow courtesy of Schulze’s inability to properly light his sets. To be fair, it was the guy’s first movie, but it’s still no excuse.

Although it pains me to paint “Hellmaster” as an unflattering failure, the film really leaves me with no choice in the matter. Despite the presence of genre veteran John Saxon and a few memorable monsters, the picture isn't worth the time, the effort, or the cash it takes to track it down. I'm starting to think that strange cinematic forces beyond our control are attempting to bury this movie, to erase it from our collective consciousness. Perhaps the only reason I was allowed to blindly stumble across a copy was to help spread the word that Douglas Schulze's "Hellmaster" should be forgotten, neglected, doomed to spin for infinite within the inky black void of moratorium. Unless you're in the mood for irritating drivel, count the skidmarks in your mother's underwear, instead.

I Still Know What You Did Last Summer