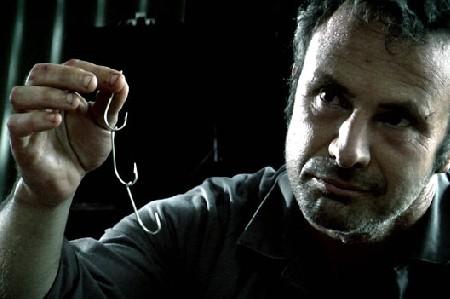 A warrior who follows his singular task to its end, forsaking future and fulfilling his pledge with absolute abandon. Absent any context this might well be a hero’s credo; one that most people would deem admirable and worthy of commendation. Christian Forteski, the central character in “The Horseman” has many of the qualities that are reserved for a larger than life archetypal hero. He possesses a strong sense of purpose, unwavering loyalty and a devotion to his goal that makes failure seem a most unlikely outcome. But with Christian there is a moral pollution that redefines his strong-willed crusade for justice. Far from the consummate good guy, this avenging guerilla is a walking cataclysm that threatens to pull anyone he encounters into his destructive path.

Alice is an 18 year old pregnant runaway heading for a rendezvous with her babydaddy. Christian agrees to take her to her meeting point and along the way the two share a bittersweet ride during which they grow a quiet respect for each other. By the time they reach Alice’s drop off point both of them seem reluctant to part, each perhaps sensing some chance at redemption resting in the heart of the other. Christian gives Alice his cell number and it isn’t long before the wayward teen is calling looking for help. He swings back by and picks her up. Christian has not yet revealed the true nature of his travels to Alice but he seems inwardly resolved to stop the killing. The trouble is that the one player in his daughter’s death that remains alive is not going to let Christian disappear.

The first two acts of “The Horseman” are a checkerboard pattern of erumpent ferocity and stark lamentations of lost opportunities. It is a formula that is well rendered by director Steven Kastrissios. Add to this a standout performance and the film’s earlier stages become a wicked unbracing of the viewer’s nerves soothed only by pangs of loss resounding through dark nights and lowery skies. As Christian Forteski, Peter Marshall dances into utter hysterics during the attack scenes and still manages to carry a yoke of defeat across the rest of his purposeless life. He constructs Christian on a foundation of self-pity, loathsome dissociative savagery, and a contemptible lack of introspection but while doing so he never really loses the viewer’s sympathies. It’s a real tour-de-force and deserves continued recognition as a standout turn in modern genre film.

Technically the film is cleverly put together. The fight scenes in the early stages have a real naked pulse to them. They are tense and uncomfortable; and the sea-sick camera and editing place the viewer directly in the middle of this demented avenger’s fever dream. The well-used color-keying and desaturation reinforce the fact that Christian’s choices have final, black and white outcomes for everyone involved. The sound design and SFX work is seamless for the most part and the momentum that is created by all these elements coming together will allow the viewer to look past some of the real world questions that might reintroduce disbelief at the wrong time.

The third act sees the film shift gears from a neo-realist fable illustrating the emptiness of revenge into a Bond-esque bare knuckle actioner. Though it is reasonable to expect that Christian’s violence would have an explosive end this shift misses the mark with me. Perhaps it is not even the easy narrative structure so much as the contrivance to amplify tension and the cheapening effect that has on the earlier material. “The Horseman” may bathe joyously in its own violence from frame 1 to the frame 138,000 but the metaphysical journey of its characters and downbeat tone seem to indicate that a greater set of ideas is being aspired to. Whether or not those aspirations are fully realized over the first two acts matters less than it should because after the final showdown a disturbing odor of kick-ass action taints the return of existential gravity in the film’s final moments. Trying to reconcile the film’s early portrait of a remarkably relatable, self-abusing serial murderer with a plot terminus that relies on a life-saving handcuff key just out of reach, a Deus ex machina cell phone call, and a race to the gun by two-injured-combatants is a leap I could not make.

The problems of the third act don’t completely damn the proceedings. The bulk of this movie has a good bit of nastiness to it, delivered with well-motivated, animalistic energy and counter balanced with Christian’s reflexive emptiness. It is skillful, well-paced and in most ways, an appropriately unsettling response to a film like “Ninja Assassin”. Or at least it seems that way until the last showdown. Though I found it uneven in totality, there is a great performance at its heart and a good amount of food for thought as well. Christian Forteski is not a hero; he’s a madman who is worth following for an hour and a half.