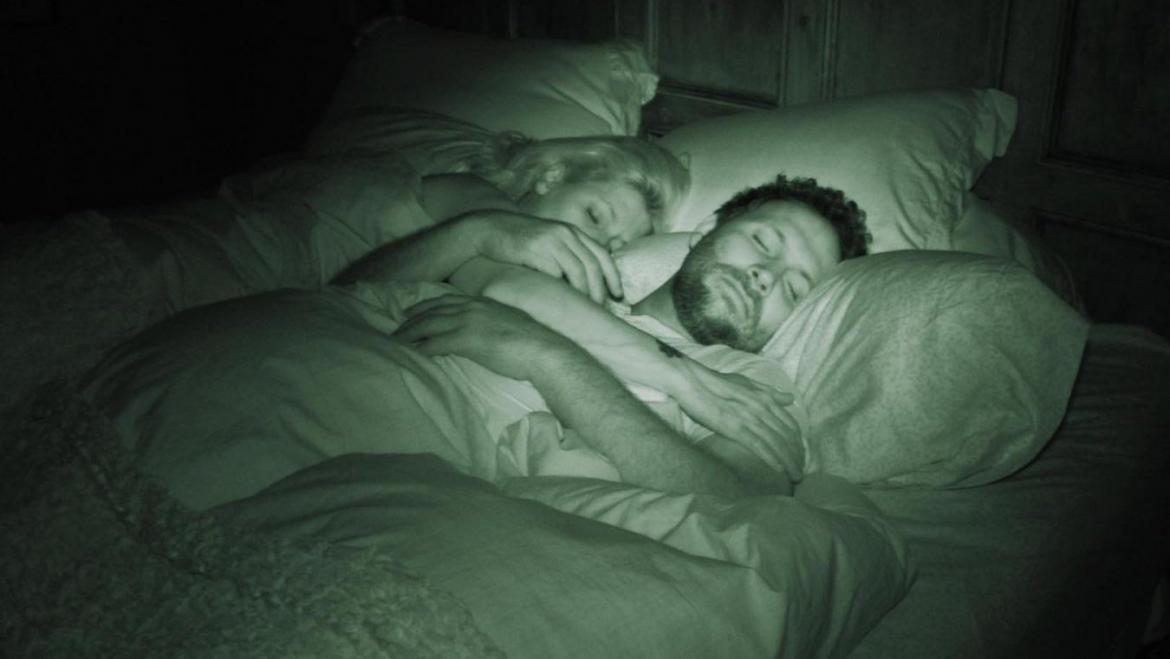 Director Adam Mason has been bouncing around the genre for some time now and with his latest feature, Hangman, he raises one very important question- when was the last time you checked your attic? This grim, joyless found footage exercise calls back to the raw brutality of The Poughkeepsie Tapes by way of a Paranormal Activity type of presentation. It will undoubtedly give you cause to make regular attic checks, but is the film as a whole worth your time?

Hangman is told entirely from the perspective of the cameras belonging to the film's antagonist. Out of the gate we as the audience see the very end of the maniac's psychotic ritual and then jump right into his perspective as he chooses his next victim. This time its a family of four as they leave for vacation. He breaks into their car, uses the home function of their GPS to find their house and sets up camp by placing a series of security cameras in various places in the house. He even trashes the house to get under the family's skin to give them the feeling of being violated, and the whole time not realizing that as they go about their lives, the perp is kicking back in their attic, watching their every move, and turning the family against one another.

The thing that Mason does best here is toy with the audience's own fears of having their own privacy toyed with. The paranoia that goes along with feeling as though someone is messing with you, or the uncertainty that follows after you've had your personal property broken into. So, if you're expecting Hangman to at some point turn into a feel-good happy-go-lucky tale of misunderstanding and redemption, you've come to the absolute wrong place. This is a film about the darkness of reality- and it's hard to watch.

For better or worse Mason sees this concept through to the bitter end. Viewers will either be glued to the screen in a sick fascination as to what the killer plans to do next to mess with the family or tired of the slow burn voyeurism on display. A lot of the film is dedicated to just watching the family go about there day to day lives, but with the knowledge that the unwanted houseguest has intervened in that routine in some way- rather it be backwashing into the orange juice, exposing adult toys owned by the teenage daughter, and things made to build tension between the clueless victims. The killer himself tempts fate by walking amongst them in plain site at times but when their backs are turned or hiding in the shadows of the closet right in front of them. These are the moments that make Hangman so uncomfortably watchable. здесь семена сативы

There are also some familiar faces in the crosshairs of our protagonist. The family consists of Jeremy Sisto (Clueless), Kate Ashfield (Shaun of the Dead), Ryan Simpkins (appeared recently in Anguish), and Ty Simpkins (Jurassic World, Insidious and Insidious Chapter 2). Even Amy Smart shows up for an extremely brief appearance. The performances are all pretty standard for this type of film, leaving most of the "heavy" lifting to Eric Michael Cole who plays the hangman. Considering the fact that Cole only speaks actual words two separate times in the film and both times it's the same five letter sentence repeated twice in the scenes it's notable that he comes off as the most memorable. Due in large part to his disturbingly calm and confident creepiness with flashes of true insanity bubbling under the surface.

As skillfully as Mason is able to dig under audience's skin with Hangman, a lot of the film is mired by the standard found-footage trappings. However, the real test to one's ability to enjoy the film is how forgiving they feel while sitting through a film that's almost entirely buildup with little to no resolution. The abrupt and dour ending makes Hangman nearly impossible to recommend, but certainly leaves a fleeting impression.