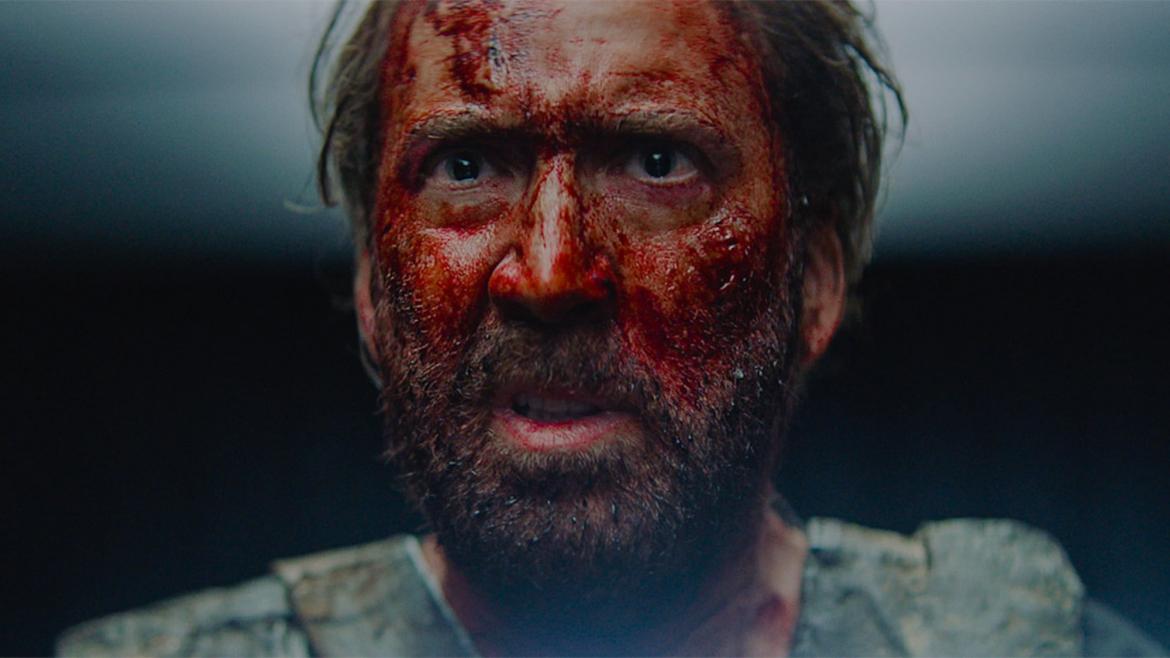 A series of arresting visual and sonic landscapes, Mandy often feels like a 2 hour trippy music video you'd see playing on a computer desktop in a darkly lit room through a cloud of smoke, lit by a blacklight. In such a setting, under the influence of any number of substances, it's easy to see the appeal. Stone cold sober Mandy may only be accessible to a very specific audience that's forgiving enough to overlook its masturbatory vibe.

Idyllic love and desperate revenge are what Mandy has to offer. Panos Cosmatos's film is an artistic rendering of a love story abruptly ended and the Nic Cage rampage that ensues as a result. Cage stars as Red, a lumberjack living a quiet existence with the love of his life, Mandy (Andrea Riseborough). Their happily-ever-after is cut brutally short after Mandy captures the fancy of an enigmatic cult leader, Jeremiah Sand (Linus Roache), who decides she must be forced to join their ranks for his selfish delights, leading Red on a rage quest to dispatch everyone involved with extreme prejudice.

Mandy is loaded with what can only be described as purposeful symbolism. Scenes play out with some semblance of a vision meant to be deeper than just the visuals. Even still, shots are meticulous composed in such a way that single moments are works of beauty, some fitting right in as the cover of a metal album. All the while the score bellows from psychedelic melodies to power chords that, in a theater setting amped to 11, reverberates through your ears to near migraine levels. There's no denying that Panos Cosmatos painstakingly constructed the film with surreal dreamlike brushstrokes.

Audiences are treated to what's essentially two movies and neither is presented with much narrative depth. The first half is a portrait of a couple in love who cross paths with a force that wishes to tear them apart. The second half is the revenge against said force for having successful done so. The love story is less story and more a voyeuristic portrayal of a couple in love. We know very little about their lives before each other and see only an idealistic existence of a quiet life of two people who just like rock n roll (cause they wear Metallica and Black Sabbath t-shirts) and chillin' on the couch. The one glimpse into character depth we get is a horrific story Mandy tells about her childhood that is met with the equivalent of Nic Cage doing a Keanu Reeves-esque "Woah". The first hour transpires with a series of fantastical gazing as the scenes play out with blaring music and a kaleidoscope of colors. Once the cult steps in the film turns into a stage play for Linus Roache to monologue before being emasculated, putting into motion the final hour of Cage's blood-soaked revenge.

What an hour the finale is. Mandy flashes hints of venturing into the supernatural with the inclusion of a biker gang who likely view Hellraiser as hardcore pornography. The film in its entirety is like one long acid trip, though the finale sprinkles a little coke freakout as the cherry-on-top. Cage aka Red literally throws a pile of cocaine up his nose, but not before lovingly crafting a literal battle-axe to carry into combat. Now that we've gone full Cage the film is free to blast its deafening guitar riffs while the unhinged actor battles with oversized chainsaws, communicates wordlessly with an alchemist who keeps a tiger as a pet, and experiences the slow realization that none of this has anything to do with that Barry Manilow song.

With Mandy, Panos Cosmatos has established his filmmaking as a full on brand in and of itself. Favoring excess style at the expense of almost everything else. The film provides all facets of Nic Cage's fascinating on-screen presence, but none are as infectious as when the wheel's come completely off the tracks. Mandy is a fever dream of sounds and colors punctuated by extended ultra-violence that ultimately either is or is not your "thing". If nothing else, you're gonna want more Cheddar Goblin in your life, stat.