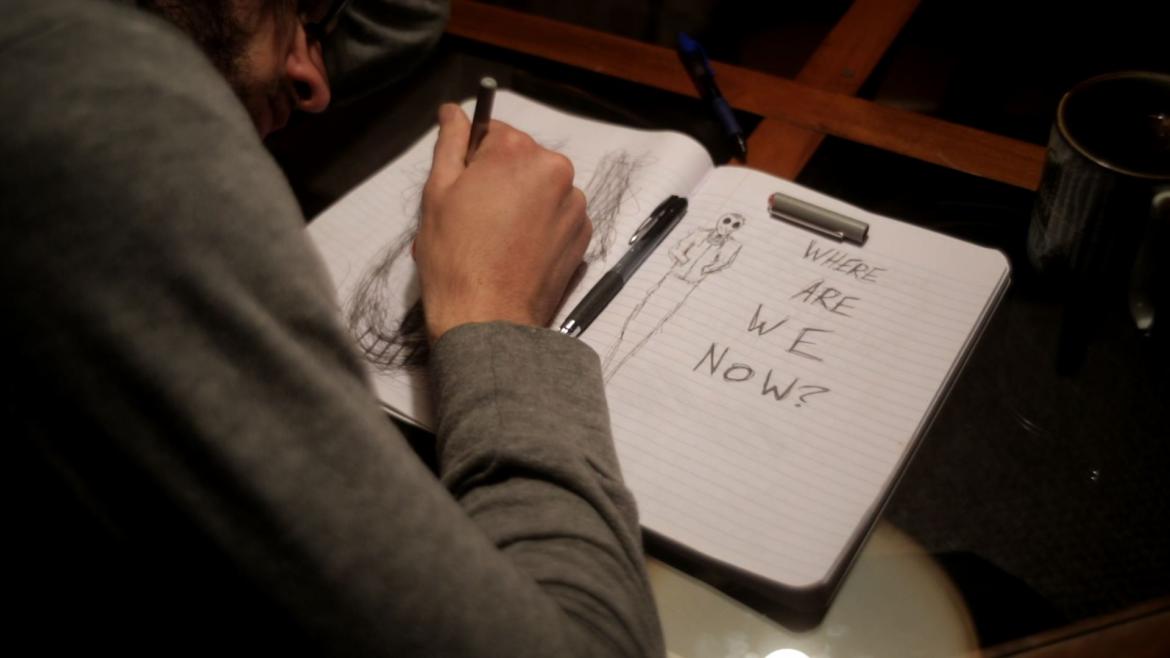 Jerry J. White III's feature film debut is called The Horror and yet, there is very little about it that screams horror. Then again, on the surface that could be said about a lot of movies that feature the slow unraveling of a main character. The icy midwest chill serves as the backdrop to a bleak decent into madness, but also a symbolic disconnect between the siblings at the heart of the film.

Co-writer Raymond Creamer stars as Malcolm on his way to his parents Michigan lake house along with his twin sister, Isabelle (Callie Ott), and their significant others. The twins parents have recently passed following a tragic car accident and winter is looming so the goal of the visit is to prepare the house for the weather. Relationship woes befall the twins and they are soon left at the residence alone when a pair of masked home invaders attack them. Malcolm is able to fend one off while killing (maybe?) the other. Isabelle attempts to move on with her life, but Malcolm falls into a downward spiral, spending day and night at the cabin in search of the mask discarded by the other attacker. Isabelle seeks the help of a psychiatrist to help her come to terms with her feelings and understand what her brother is going through before it's too late.

Coming in at a lean 74 minutes, much of the first half of the film up to and a little after the attack is told from Isabelle's recollection to her psychologist. It's never abundantly clear if we are for sure seeing the events as explained by Isabelle or if it's the events as they actually occurred. There are moments where Malcolm is the only person in the scene so it'd be pretty tough for a narrator to accurately capture one's psyche in those specific moments. Once we pass the halfway point though it's safe to assume we are up to date and the scenes we experience are Malcolm in the present and the dissentigrating relationship he has with his sister and of sanity in general.

The Horror is extremely light in content, playing out many of Malcolm's arc without dialogue as he ventures out onto the frozen Michigan lake poking holes into the ice with an axe and reaching in to the freezing water hoping to fish the mask from the depths. The shots of the actor against the white backdrop are beautiful in their simplicity and visually interesting in seeing a dark spec on screen against the snowy landscape. The film in and of itself finds coherence in how simple it is, a quick character study that uses the bare minimum to tell its story. Even still, it is a story that could have used a little more punch in the end to leave a more effective lasting impression.

Creamer's unhinged performance is the glue holding The Horror together, and even it falls just short of being truly unsettling. The film's opening and ending sequence cut into the film's run-time and seem completely divorced from the film's actual story. It's unfortunate as this is time that could have been spent fine tuning the finale. As film debuts go The Horror shows plenty of promise, although it could have a used the more confident hand of a genre vet to carry it home.

The House with Laughing Windows