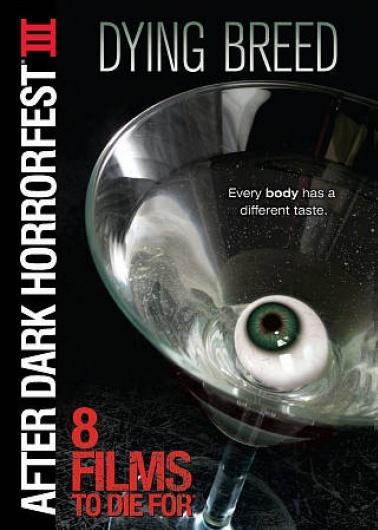 Nina's sister set off to the Tasmanian outback eight years ago in search of proof of the elusive Tasmanian Tiger. She never returned. There are rumors other mythical creatures living in Tasmania as well. In 1824, Alexander Pearce, also known as "The Pieman" escaped from the British Penal Colony held upon the island. Pearce was known to be a violent cannibal, proven by the fact that he escaped with seven other prisoners and only he survived, albeit with chunks of human flesh in his pockets.

With the last snapshot sent by her sister being a footprint of the elusive tiger, Nina has decided she needs to finish her sister's quest to honor her memory. With her boyfriend Matt in tow and friends Jack and Rebecca who have financed the expedition, the foursome set off into the back country to locate the creature. Once they arrive however they find out that there may be two legendary monsters with a long line of ancestry still alive in wilds of Tasmania.

"Dying Breed" sets us up for a double dose of terror with a mixed plot of killer wildlife and hillbilly hijinks. Unfortunately for us, this measures out to be nothing but minor confusion and a lack of excitement. Killer back woods mutants have been done so many times over now that it is hard to get excited for them. In theory the idea of throwing in the mystery of a killer creature would help to mix things up. In this movie they make an admirable attempt to do just that, but the killer kitty becomes nothing more than a wasted effort as it quickly falls to the wayside. This leaves us with your standard 'don't go into the back country' cautionary tale and lands "Dying Breed" firmly into the mediocre category.

Adding to the middle of the road quality is a lack of action for the first forty five minutes of the film. There is nothing here but character development which fails to be very interesting. We know the extent of Nina's drive early on. Beyond that we meet some of the locals and we discover just how annoying the character of Jack is, which is to say; he's down right grating. This is acceptable as a character quality but the man is so far outside the lines of acceptable that he makes the movie a challenge to watch. Loud and boisterous the first and second act manage to become an exercise in hoping he dies, soon. He manages to break any flow they have managed to establish and that is not a whole lot.

Beyond annoying characters, the most glaring issue here is that there are two separate antagonists promised, yet they fail to do anything significant with either. The tiger aspect is there and serves as nothing but a minor red herring. The cannibal hillbillies are there as well and they do use them to an extent. Considering however they do not get down to business until at least fifty minutes of film has past, it's a disappointment to say the least. There are hints given throughout the first two acts of the film as to what the locals are up to, but these hints fail to be affective when you're watching a horror movie and want to see the goods.

"Dying Breed" had a decent setup for a double dose of carnage but fails to dig far enough into either aspect. While the gore is decent when it does show up, we see too much of it in the peripheral as opposed to it being the main focus and therefore there's no visceral excitement. The movie is not complete trash; what is there is well crafted and engaging at times. Unfortunately it just leaves the viewer wishing for more once the final credits have rolled.