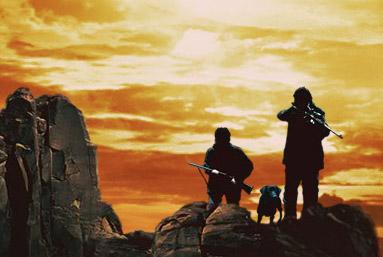 King of the Hill (Movie Review)

It could be argued that the line between horror movies and other genres is drawn by the choice of weapons. Chainsaws, machetes and fangs all belong to the horror milieu, while guns, grenades and bombs classify a movie as action or thriller. Rambo might slaughter twice as many people as Jason Voorhees but because he kills crowds of people all at once and with military grade weapons, he's an action hero and not a boogeyman.

"El Rey de la Montaña" (that's "King of the Hill" to you, gringo) attempts to give the sniper rifle its due consideration in the pantheon of horror movie weapons. The film takes a plot that wouldn't be out of place in a mainstream thriller (and bears some resemblance to 2002's "Phone Booth", written by horror vet Larry Cohen) and sets it the deserted backwoods location familiar to horror fans. By doing so, it creates hybrid movie that has the tension and scares of horror while using the tools of action/thrillers.

The story follows Quim and Bea, two mostly unlikable protagonists who meet and almost immediately have sex in a gas station toilet. When Quim goes to pay for his gas he realizes Bea has stolen his wallet. He decides to follow after her and soon the two of them find themselves caught up in a game of the most dangerous kind, as an unseen sniper disables their cars on a lonely road and proceeds to hunt them "Deliverance"-style through the Spanish countryside.

The tension level stays high for the first half of the film as we're left never knowing when another bullet will come from nowhere and leave somebody with a hole in their head. A few times in the movie hope for salvation comes for Quim and Bea but all these hopes are cruelly picked off one-by-one. Of particular note is the fact that instead of acting like typical stoic movie heroes, the main characters frequently act like many real people would when terrified for their life... squealing, crying and generally behaving like cowards.

At about the mid-point the film changes viewpoints and begins following the shooters and giving us clues to their motivations. The identity of the shooters is an interesting twist that unfortunately loses some impact due to its similarity to the twist in some other recent films which can't be named due to potential spoilage.

With the change in POV comes a few scenes filmed in the behind-the-gun style of a first person shooter game. These scenes attempt to make a subtle point about modern-day violence but kill any chance at subtlety by being way too on-the-nose. Unfortunately much of the tension of the first part of the film is lost and the last few scenes are somewhat anti-climactic, and end up being more like watching someone play "Counter Strike" than the nail-biting finish the first half of the film promised.

Disappointing second half aside, "El Rey de la Montaña" clocks in at a lean 90 minutes and delivers the thrills without overstaying its welcome. It's well-worth a watch and will appeal as much to fans of thrillers as it will to genre audiences.