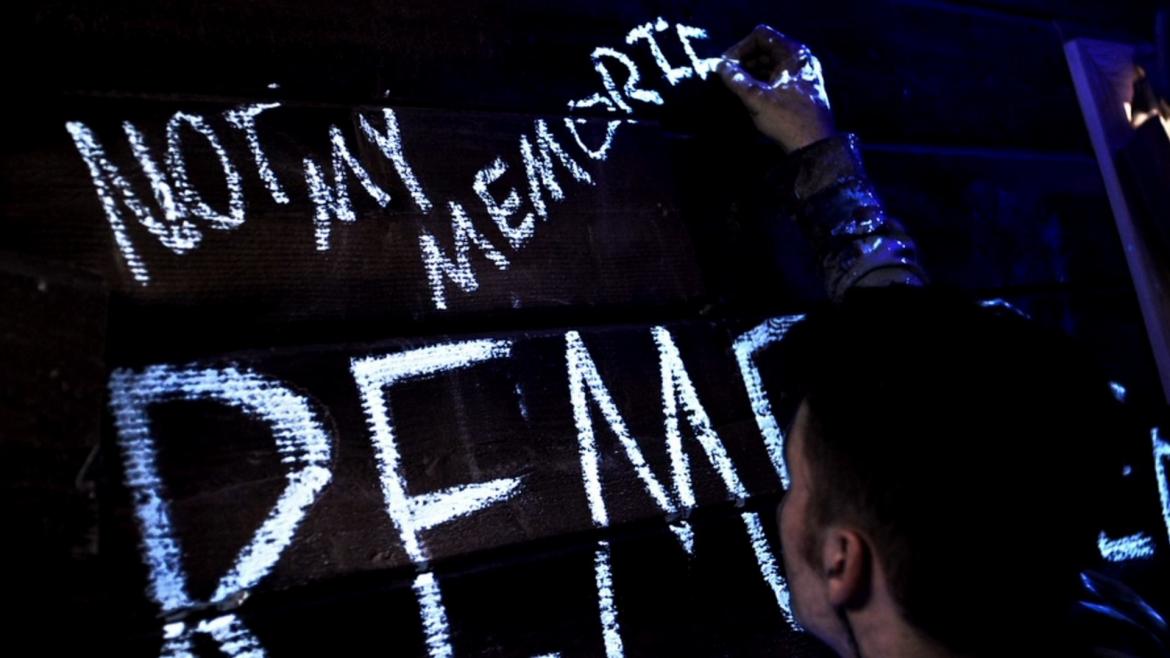 The word "the" followed by any noun in the English dictionary is single handedly the laziest practice when it comes to coming up for a name of just about anything in entertainment. As luck would have it, every once in a while filmmakers and writers get lucky if their product doesn't come off as uninspired as its name. Google searchability aside, The Hive from David Yarovesky does skim the surface of some deep and though provoking ideas, but in the end is kind of like a jock having a fleeting moment of clarity before ending up a vegetable after one too many concussions.

Yarovesky has likely spent a good portion of his budget on black lights and all sorts of goo that looks cool when lit under those lights. The film begins with Adam (Gabriel Basso) waking up covered in gunk with absolutely no memory of how he got to where he is or what happened to him. As he investigates his surroundings he begins to experience a series of flashbacks that serve to help him piece together his story- one of  summer camp crushes, drinking, sex, and a plane crash that unleashes a mysterious virus amongst the campers and the staff.

Chris Nolan, Yarovesky is not. The filmmaker's approach to a script written by himself and Will Honley takes a science fiction approach to one of Nolan's most notable films- of the amnesia variety. The Hive is geared toward an MTV audience; one that sees art and meaning in poorly written teen romances, a messy plot, and thinly veiled mysteries. If one can power through to the ideas hidden under the glowing neon lights there's a juicy bit of amazing science fiction that is splattered all over the walls of the film, but neither Yarovesky or his co-writer can competently piece it together on screen.

There is a germ of an amazing science fiction TV series at the heart of this film, but more time is spent on a misguided romance between two people with absolutely no chemistry. In-between vomit inducing blossoming teen love flashbacks our main character spends most of his time screaming that he doesn't know what is going on. It's not until The Hive attempts to turn into Evil Dead that things start to venture into interesting territory. However, Yarovesky refuses to let go of the teen drama and romance only giving slight glimpses of a much more interesting story that plays more like background noise to inconsistent actors doing their best to make sense of something their own filmmaking team doesn't seem to fully understand. Чтобы в арго казино играть было удобно, рекомендуем на официальном сайте скачать установочный дистрибутив. В нём такие же лицензионные игровые автоматы и тот же самый дизайн, депозиты делать легко и быстро, главное не забывать делать кэшаут.

There is promise around every corner which makes The Hive's failure to bloom into something beautiful and interesting all the more disappointing. When all is said and done the colorful mess that is Yarovesky's film would have been better suited for the nonsensical noise of a Skrillex video.