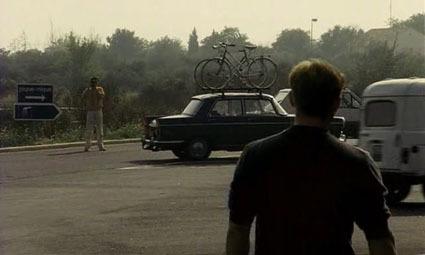 “The Vanishing” (Spoorloos) follows Rex and Saskia, a young Dutch couple vacationing in France. They stop at a gas station to refuel; Saskia goes inside to grab some food and never returns. Rex is devastated and spends the next three years searching for his lost love. He appears on TV, follows a few vague clues and loses his subsequent girlfriend because of his obsessive quest to know Saskia’s fate.

Saskia’s kidnapper is Raymond Lemorne. He is a family man, chemistry teacher and the only one who can answer the questions about Saskia’s disappearance. Lemorne sees Rex on TV and is inspired to seek him out and offer him some answers. Ray and Rex meet at the fateful gas station and Ray offers to end Rex’s all-consuming uncertainty, provided he consents to drinking a cup of spiked coffee.

From that simple synopsis you might never suspect that “The Vanishing” may be the most horrifying film of the 1980’s. The film is a deep exploration of suspended grief and denial and an authentic portrait of the anguish and torture of losing a loved one suddenly, without explanation. It is also a movie filled with gnawing dread with a story that builds to a crushing existential conundrum in its denouement. Raymond Lemorne is a monster too familiar and Rex Hofman is ultimately a victim of his own torment. These details make “The Vanishing” strike close to the bone and echo in the viewer’s mind long after it is finished. If you are one of the unfortunate many who saw George Sluizer dismantle his own film with the American remake of “The Vanishing” but have not seen the original, then it is time you make things right.