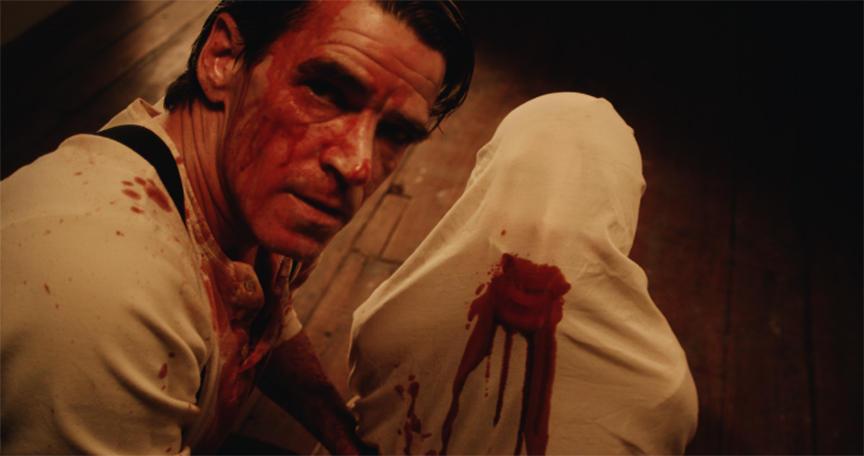 It seems that so many films try to go for that "twist" ending in hopes to make the movie iconic. Arguably, Hitchock and his film Psycho started that craze for the horror genre. It is an understandable desire and approach to making a solid genre movie, as long as it hits well in the end. The main point to remember, however, is that films like Psycho and the original Friday the 13th did more than just incorporate a twist ending. They made the journey to that twist just as exciting and imperative to the viewer. Ivan Kavanagh's film The Canal is an example of a contemporary writer/director going for that oh so coveted twist resolution. In the end, the twist is one that truly hits the spot. The unfortuante part is that there was no focus on making the ride to it worth taking.

David (Rupert Evans) is a film archivist that has everything going right for him. Surprising his pregnant wife Alice (Hannah Hoekstra) with a new home, he just can't wait to begin the new life that they've built together. Jump ahead a few years and that happy couple is now a trio with young son Billy (Calum Heath) in tow. As delighted as David is to have a new addition to the family, the love between him and his wife seems to have dimmed. He accompanies Alice to a work event and begins to believe that she is having an affair. Several other signs plague him like late night text messages, long work hours, and a lack of passion coming from his once infatuated partner. Eventually David follows Alice and her new man where he catches them in the act of an affair. Running from the scene, he gets violently sick to then have hallucinations of warping walls and mysterious men. Right before blacking out he sees a man attacking Alice before dumping her in the river. After Alice's body is found in the river, David knows the image he saw was not just a fever dream. He begins to obsess over finding her killer and uncovering  the truth behind the home he purchased for his family. As the truth begins to unravel, he can no longer explain what's happening or how his wife died.

Overall the film has an interesting style that keeps the engagement almost high enough. There's an artistic approach to the shots and narrative scheme that shoots the first act off with a bang. Viewers are pulled in wondering what exactly David is undergoing with all of the hallucinations. Real credit to Kavanagh as well for not relying on making jump scare moments the focus, but rather building a world that is tense. It has a feeling like a Fincher film; the world unraveling around the characters. Sadly, once Alice is dead and the second act begins, the movie loses all of its steam. It seems obvious what the outcome is going to be, and the movie makes no attempt to throw the viewer off. Scene after scene of David seeing Alice or a mysterious man becomes monotonatus and somewhat torturous. It points out how slow the pacing has become and the lack of tension in each moment. Once the final act comes to a close and the twist ending is revealed, it is a bit more complicated than what the average viewer will assume. Kavanagh seemed to save his best moments of storytelling for those final moments which would work better as a short film. Even in the imagery, the opening and closing sequences hold such power that its a shame to see that sucked away during the meat of the movie.

This is tough to say the least. Its not a horrible movie, nor is it really that bad. It's not a great movie though either. Its about as middle ground as a horror thriller can get. What gives it more negative points though is that it has such a tantalizing premise to suck the audience in, only to then throw that away once the story has to unfold. Its a cheat tactic and one that hopefully Kavanagh will work on fixing seeing as how strong of a cinematographer he appeared to be.