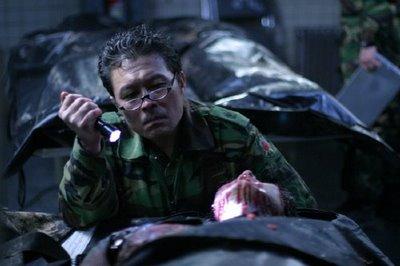 South Korean director Su-chang Kong's 2008 military horror outing "The Guard Post" (aka "G.P. 506") opens with a scorcher: A squadron of heavily-armed soldiers storm the seemingly abandoned G.P. 506, an outpost which lies along the tumultuous North Korean border. Once inside, they discover the horribly mutilated bodies of countless young troops, all of which are scattered haphazardly around the base. The culprit, wide eyed and wild, stands before them drenched in blood, a large axe clutched in his hands. It’s one hell of a way to start the picture.

Unfortunately for those hoping for a brisk, tightly-paced cinematic journey through endless, gore-encrusted horror, “The Guard Post” steps on the proverbial brake, forcing you to endure countless confusing flashbacks and mountains of unnecessary exposition before returning to the intensity of the film’s memorable opening sequence. Even for someone who prides himself on his unshakable attention span, the film was a bit of a chore to sit through. Su-chang Kong does provide plenty of incentives to keep watching, of course, but you just end up wishing he’d get on with it, already.

Similar problems plagued the talented writer/director’s first feature, the suspenseful yet impossibly plodding ghost story “R-Point,” another chilling endeavor that, coincidentally, chronicles the supernatural adventures of a group of sympathetic South Korean soldiers faced with unspeakable evil. The critical component missing from both productions is a talented editor; had someone taken the time to trim the fat, so to speak, perhaps these otherwise excellent movies wouldn’t lull most people to sleep after the first 30 minutes. A bit of balance never hurt anyone.

The central storyline focuses on a politically-motivated investigator's attempt to unravel the mystery behind this gruesome mass murder and, in the process, protect the son of a high-ranking military official from scrutiny. As our grizzled hero delves deeper into this perplexing head-scratcher, he discovers that something truly bizarre and completely hideous has been recently taking place at the guard post, though the gravity of the situation ultimately escapes him. What caused all of these upstanding, kind-hearted soldiers to turn ridiculously violent? More importantly, will the same thing happen again to the men searching for answers?

"The Guard Post," despite its nearly two-hour running time, doesn't offer up any easy explanations as to why, exactly, the men station at G.P. 506 became ruthless killing machines. In fact, most of your questions will go unanswered, forcing you to draw your own conclusions regarding the source of this widespread madness. Although I don't necessarily need the entire portrait painted in painstaking detail, even I was left wanting a little more than I was given, and that doesn't happen often. If your film starts to bore me, you're doing something very, very wrong.

Problems aside, the film does feature a number of genuinely creepy scenes, as well as several heaping buckets of putrid gore. Additionally, the film is supported by several snappy performances that never suffer from the melodrama that's generally indicative of South Korean productions. Everything falls precisely where it should, which makes the pacing issues and ensuing boredom such a immense disappointment. Saying the film is twenty minutes too long is being extremely conservative.

Reading over this review, you're probably of the belief that I'm not exactly a fan of "The Guard Post," and for the most part, I suppose you're right. The atmosphere is unshakably eerie, and some of the early sequences involving the initial exploration of the outpost have ingrained themselves upon my cinema-saturated brain. Alas, the sum total of its effective parts isn't enough to outweigh the epically slow pacing, the annoying flashbacks, and the countless loose ends. As an exercise in style over substance, "The Guard Post" shines bright. As a straightforward horror excursion, however, it's sorely lacking.