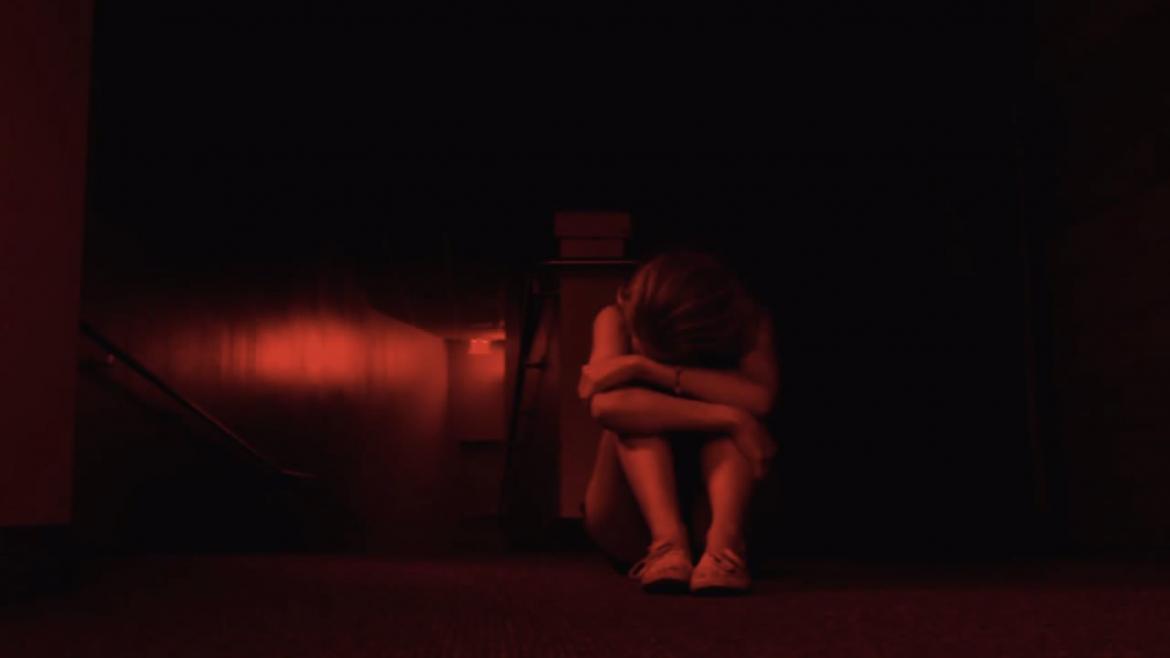 One of the loudest and most common complaints about found footage horror is its derivativeness. The Blair Witch Project struck like lightning all those years ago and ever since directors have been trying to capitalize on that magic to varying degrees of success. A group of people (friends/researchers/family/etc) go to a place (creepy woods/creepy asylum/creepy roadtrip/etc) and then weird stuff starts happening, and our subjects never stop filming, even when their doing so is indefensible. But the problem goes one step further; found footage movies may get repetitive, but our reviews are doing the same thing. We talk about how unoriginal the movie is, we list the tropes, and then we plug in all of the places this movie committed those sins. So, let’s put all of that aside and talk about everything else that is wrong with this movie. Trust me, there’s plenty.

The most recent in what has become a deluge of new Blumhouse Productions releases, The Gallows is a found footage movie meant to look like it was filmed on a combination of hand-held and cell phone cameras. The local high school in a small Nebraska town has decided to put on a production of  play called The Gallows, twenty years after a freak accident which resulted in the death of a student named Charlie. Parents and students alike seem convinced that Charlie still haunts the auditorium, sharing stories of unexplained happenings that can all be attributed to the spirit.

Our protagonist, if we can call him that, is Ryan. Forced to take drama by a course requirement, jocky Ryan is not at all amused by having to participate in such a nerdy endeavor and he makes his displeasure known by goofing off, torturing the rest of the students, and harassing the drama teacher, all without putting down his camera. Ryan is a deeply unlikeable character to be sidled with for the majority of the film, his utter lack of redeeming qualities making it pretty hard to empathize with him. Next we have his girlfriend, Cassidy (played by the daughter of Kathy Lee and Frank Gifford.) Where most films might try to make Cassidy a foil to her cruel and obnoxious boyfriend, the writers make the bold choice of having Cassidy be just as irritating and harsh. Our only sympathy for her comes from how coarse Ryan is to her. Next we have perhaps our only pleasant character, Reese, an ex jock who auditioned for the lead in the play to try to get close to leading lady Pfiefer.

On the eve of the premier, Ryan and Cassidy convince Reese that his abysmal acting will do nothing to win Pfiefer’s heart and that instead they should tear the set down so that the show can’t go on. If the play never happens, Reese can’t disappoint Pfifer and so, a plan is born. The three return to the school at night, slipping in through an unlocked door. Once they run into Pfiefer and their plan is found out, they discover that they are locked in and you can probably imagine where the story goes from there.

Now, we aren’t going to talk about the predictable nature of the story, but that doesn’t mean we can’t talk about other problems with the plot, namely that it has more holes in it than a slice of swiss cheese. Starting at the very beginning, the film never really reckons with why this school has decided to attempt another production of this show, on the twentieth anniversary of Charlie’s death no less. Rather than use this as a source for some very understandable and much-needed tension, the film opts to not have a single person question the choice. Furthermore, after a student was hanged doing this exact play, you’d think they would have learned that their gallows shouldn’t have a real trap door, or perhaps there noose should have some kind of fail safe to prevent such a tragedy from occurring again, but they do neither. Speaking of, why would Charlie’s ghost be particularly vengeful at all. As far as the movie posits, his death was an accident. An awful accident, no doubt, but an accident nonetheless. Why his ghost would manifest in particularly violent or homicidal ways is never truly explained.

The Gallows also relies far too heavily on second-rate jump scares that do little more than throw loud noises and sudden close ups at the audience to create an atmosphere of fear that they seem ill-equipped and uninterested in actually earning. There are hidden parts of the school for no discernible reason other than a scare factor that just isn’t reliably there and the kids routinely separate for no reason other than to get them alone for the sake of the viewer. To this end, I would be remiss to not talk about the final sequence in the movie. [Spoilers ahead] Much like the end of Unfriended (another, unmistakably better, Blumhouse film), The Gallows seemed poised to end on a distinctly unsettling and creepy note, but opted instead to go for one last cheap thrill. When Reese and Pfifer are the only two left standing, he decides to sacrifice himself so that she might live. After slipping the noose around his neck, he pleads with her to leave, but she stays, quoting her lines and crying on the floor. Reese is hanged and Pfifer makes her way to the front of the stage to take a bow - with Charlie - before the house lights come up to reveal Charlie’s high school girlfriend, clapping. (Let’s set aside that the math of Pfiefer being Charlie’s daughter totally doesn’t add up.) This was a somewhat interesting twist and would have been a fine place to end the movie, but it isn’t the end. Instead, it is followed by a totally nonsensical scene at this woman and Pfifer’s house where the police have been called (for some reason) and are carrying cameras (who knows why.) This set up just allows one more chance for the hooded ghost to jump at the screen in horrible CGI and maybe get a few screams.

From start to finish this was an incredibly disappointing movie. For casual fans who only see one or two horror movies a year, this might be totally acceptable, but if you’re reading this review, you probably aren’t that person. This movie is exactly the kind of maddening cash-grab that infuriates horror fans and the last thing we want to do is encourage them further.