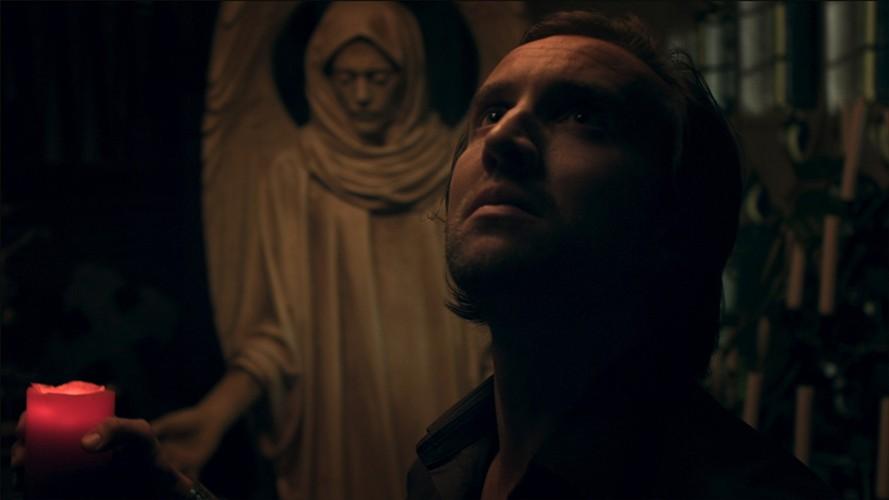 The Last Will And Testament of Rosalind Leigh (Movie Review)

As founding editor and president of Rue Morgue Publications, Rodrigo Gudino is well steeped in the culture of horror films. Shifting from the role of critic to creator has been a long, calculated move. After experimenting with a variety of styles in his short films, including animation and first person point of view, Gudino turned his attention towards his first feature film. The result is stunning and finds Gudino wrestling with personal questions of faith and family relationships on screen while delivering a haunting, melancholy film that inspires fervent discussion after the credits roll.

Leon (Aaron Poole) is a young antiques dealer who returns home after his estranged mother (Vanessa Redgrave) passes away. While he attempts to settle her affairs, the return dredges up unsettling memories. His mother's religious fervor had long passed the point of faith, veering into fanaticism, until her constant “tests” drove her son away. Upon his return, Leon discovers his mother belonged to a cult that worshipped angels. While he struggles to come to grips with his mother's legacy, strange occurrences lead him to believe other worldly forces are trying to send him a message, and a dark presence lurks on the peripheral. Vanessa Redgrave provides narration, speaking to the viewer from beyond the grave.

The Last Will is one of the most assured, beautiful and melancholy horror films I've come across in a long while. Gudino keeps the pace deliberate, making masterful use of shadow and sound design in order to amplify the tension as Leon sifts through the signs the house sends his way. The film possess an air of almost unbearable tension. Gudino keeps the cult aspect on the fringes, a decision that benefits the film. Its inclusion heightens the tension (one sermon recorded on a VHS stands out in particular) but the main source of terror comes from the fear of the unknown, and a growing sense of terror that gnaws around the edges. Yet The Last Will sets out to do more than just frighten the audience. A sense of loss and grief permeates the film, underscored by Redgrave's flawless narration.

The Last Will benefits from the keen set design and art direction of Susan Eves. As the whole of the film is confined to the single location of the mother's home, it becomes imperative to make the home a character in and of itself. Crammed with with Christian iconography, the set pieces reveal the extend of the mother's madness while their sheer number combined with the way Gudino lights them in his shots lend the paraphernalia a sinister edge. The home has a labyrinth like quality to it, and one gets the feeling that a unique secret lies behind every door, or under every religious knick knack.

At the heart of the film is the question of faith's role in one's life, and whether it requires too large a sacrifice to bear. Redgrave's voice overs add tremendous depth to this exploration. While the voice over technique could have made for distraction, Redgrave's delivery reflects the depth of her loss as a result of her fanaticism. At end of her life she acknowledges her fervor cost her a son, and questions whether the price was too high. This internal struggle is embodied by a Gollum like creature that lurks in the shadows throughout the film, appearing before Rosalind at the end of her life and waiting on Leon's return. At the other end of the spectrum, Leon tries but fails to take that leap. An unbeliever, Leon makes multiple attempts to tap in to his spiritual side yet pulls himself back before going over. The ultimate question the film wrestles with is whether faith is a shield or a crutch.

Unambitious, derivative works litter the independent film landscape. That's what makes “The Last Will and Testament of Rosalind Leigh” so special. (Like another recent favorite of mine, RESOLUTION) The Last Will tackles big ideas while allowing its author to lay his own demons out for all to see. The horror community needs more films like this one. When genre films get attacked as nothing more as bloated, cliché ridden garbage that serve no other purpose than fantasy fulfillment to see people hacked up on screen, Gudino provides the perfect counter argument that horror can be imaginative, nimble works of art that delve into the questions that keep us awake long into the night.

Movies Like The Last Will And Testament of Rosalind Leigh

At The Devil's Door

Along Came the Devil 2