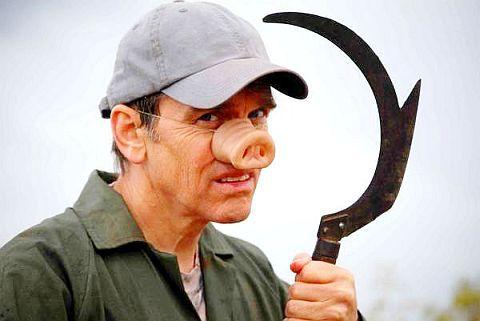 When I was 15, awkward, and raging with hormones, a movie like Brian Pulido's "The Graves" may have appealed to me. These days, I'm afraid, it takes more than hot chicks, ample cleavage, and graphic violence to keep me glued to the screen. It's not that these elements are any less appealing than they were roughly two decades ago, but my free time is extremely valuable these days, and I require a little more substance with my cinematic sleaze. Am I growing up, you ask? Not quite. I'm just choosier, not to mention a lot more critical. That tends to happen when you practically devote your entire life to motion pictures. Yes, I'm pathetic.

Judging from the trailers and promotional material that accompanied the movie's release, I expected "The Graves" to be a breezy, fast-paced shocker that would make the most of its intriguing albeit familiar premise. Unfortunately, the film is just another excuse to send a pair of attractive young women running from Point A to Point B while a sadistic killer hunts them down. It’s as boring and lifeless as it sounds. There was a point in my life when I actually had a surprisingly high tolerance for films of this nature, but that time, I'm afraid, is dead and buried. If you’re going to be generic, could you at least be entertainingly generic? I don’t think I’m asking for too much.

The picture chronicles the adventures of Megan and Abby Graves (Clare Grant and Jillian Murphy, respectively), two sisters who embark on a perplexing quest to see the world’s biggest thermometer. They spend their days waxing intellectual about Lady Death, talking directly into their trendy handheld video camera, and rocking out on-stage at a local punk show. They also enjoy wearing tight black clothing, kneeing perverts in the groin, and talking smack to sadistic killers who are about to sacrifice their souls to unreasonably evil forces. If I were an undersexed emo kid with multiple lip piercings and a bleeding hard-on for chicks who love horror comics, I suppose their routine would be overwhelming sexy. Alas, I am not.

As it goes with impromptu road trips into the middle of nowhere, the girls take a few wrong turns, find themselves in a freaky little township teeming with seedy characters, and stupidly decide to investigate the local tourist trap. During their expedition into a nearby ghost town, a travel destination which includes the area’s sinister abandoned mine, the girls discover something nefarious lurking in the desert sand. Does all of this horrific nonsense have something to do with the town’s deranged pastor (Tony Todd)? Will the sisters escape with their perky breasts intact? More importantly, do you care enough to find out? Chances are, probably not.

As a low-budget production, “The Graves” comes pre-packaged with a number of show-stopping problems. In addition to Brian Pulido’s unforgivably lame script, the film features enough wooden performances to violently choke an overachieving beaver colony. Clare Grant, while admittedly easy on the eyes, is easily the worst offender; listening to her upchuck Pulido’s dialogue becomes unmanageably irritating by the 20-minute mark. Jillian Murphy, meanwhile, spends the majority of the film crying or whining, but at least she’s tolerable. Genre veterans Tony Todd and Bill Moseley are just there for the paycheck, and their performances are suitably lifeless.

Why bother making a movie as tired and boring as "The Graves" in the first place? Considering how many times a year somebody makes a flick like this, wouldn't you want your production to stand out from the crowd? Pulido may have created a fantastic comic series -- "Evil Ernie" will always be extraordinarily cool with me -- but his duties as the writer and director of a full-length motion picture certainly leave much to be desired. Granted, I'm not the demographic, as I like to my horror movies to be stylish, interesting, and, above all else, entertaining. If you're just looking for is an excuse to watch pretty girls run, by all means, waste your time with "The Graves". Truthfully, it's the film's only saving grace.