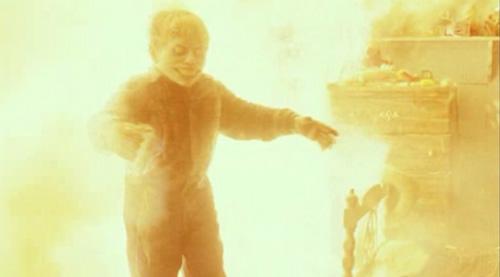 “The Gravedancers” is a frustrating film. It wears its ambitions very plainly and comes just close enough to sticking it that you get a very full sense of what the movie might have been if it were directed by Sam Raimi or a younger Peter Jackson. Like some of the other veterans of the first After Dark Horrorfest - “Wicked Little Things” and “Dark Ride” come to mind most readily - “Gravedancers” is compelling and entertaining, but ultimately constrained by a budget that cannot keep pace with its concept.

Which is a bit too negative a thing to say about the film. “The Gravedancers” is a solid low-budget haunting flick that handles its ghosts competently. It's biggest sin is that it's good enough that the viewer wants it to be better. And the ending that goes off the rails a bit, but I'll get to that.

The plot is simple – three college friends reunite to mourn one of their clique who has passed away. Drunk and grieving their friend as well as their own lost youth, they break into the cemetery to drink a final toast and, at the urging of a strange poem found on their friend's headstone, dance on three random graves. The poem was a curse, though, and the inhabitants of those three graves follow their dancers home to haunt them for one month and try to kill them. As time passes, the hauntings get more severe and, of course, more fatal.

A lot of ghost horror is a plodding affair until you get to that joyride in the final 15 minutes. “Paranormal Activity” and “The Ring” are emblematic of this – there's atmosphere in spades, but the real dread doesn't kick in until the final act. By its very nature, ghost horror is a slow burn sort of subgenre, and “The Gravedancers” stands out for me because it subverts that notion a little. Bad shit starts happening to these people before the half hour mark and the audience gets a few early glimpses at its monsters. It's because of that and its tight pacing that “The Gravedancers” feels a lot more urgent than some of its peers. Director Mike Mendez handles the economy of tension in the movie well and manages to nail a few good jump scares throughout. Like I said, this thing has Raimi DNA.

If there is a problem with this movie, it's twofold. First, the ghosts are the most obvious victim of the low budget, at times, they look like people in rubber masks that you'd buy at a Halloween store. This isn't a fatal flaw, but it might take viewers out of the movie a bit because they're contrasted by other effects that are pretty competent.

The big issue with this movie is that decides to climax on a ridiculous action set piece instead of with something more thematically fitting. It's a jarring decision and does very little but serve to make the denouement laughable, not thrilling. Up until the point where a giant spectral screaming skull bursts out of the ground and chases a Hummer through a building, the hauntings manage to build in scale without seeming ludicrous; after that point, well, all bets are off. Most of you will laugh all the way through this sequence; this does not appear to be the intent of the filmmakers.

“The Gravedancers” is a few missteps away from being one of those underdog horror flicks with real staying power. Five years after the fact, it's maybe one of my favorites of that first Horrorfest class despite its imperfections. It does more than a few things right, which is more than anyone can say about some of the major genre releases we've seen in the past few years.