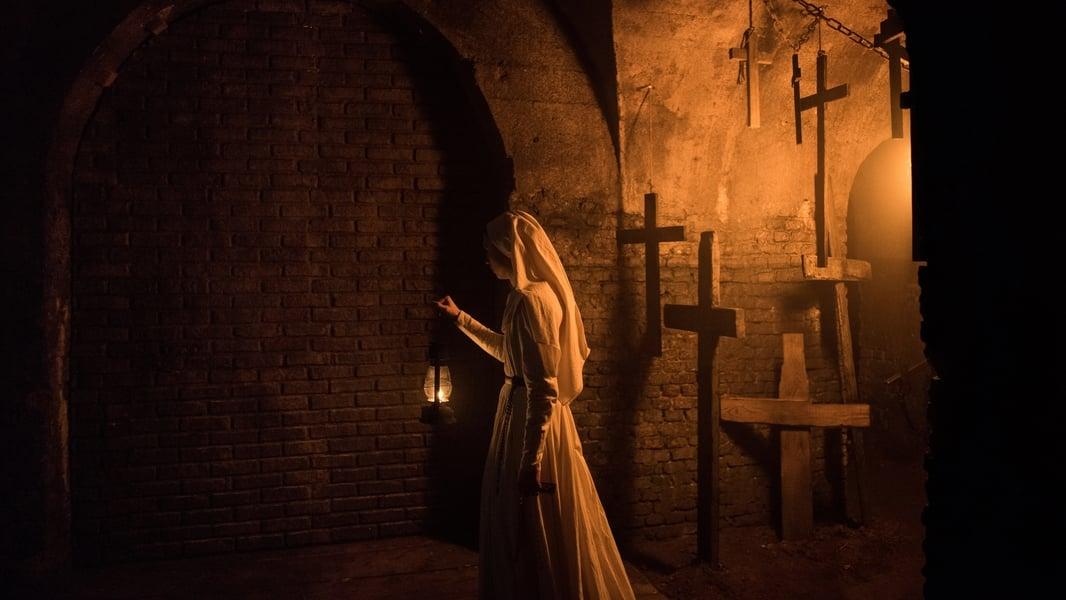 Love it or hate it, The Conjuring-verse has expanded once again. Corin Hardy’s The Nun proves that no monster or character from these supernatural films is safe from receiving their own standalone story, including the titular demonic religious figure. For those wondering how this evil nun came to be before the events of The Conjuring 2, you’ll be disappointed to know to know The Nun doesn’t accomplish much with world-building or connecting the universe’s dots. Instead, the film is another spook house experience that’s light on logic and heavy on staged scares.

Despite its ancient subject matter, The Nun takes place in 1952, not long before the events of the first The Conjuring. After a young nun is found dead from suicide in a remote monastery, the Roman Catholic church sends Father Burke (Demián Bichir) and Sister Irene (Taissa Farmiga) to investigate the strange and tragic occurrences at the once holy place. Along the way, they meet Frenchie (Jonas Bloquet), the man that discovered the dead nun and alerted the local town. The three try to discover the history of the monastery by interviewing its mysterious Reverend Mother and the surviving sisters. They soon discover a demon named Valek has disguised himself as one of the nuns and has been picking off the holy people one by one.

The shameful thing about The Nun is that it clearly wants to be just as important as the other Conjuring-verse entries, but similar to the original Annabelle, it spends too much time answering questions that lead nowhere. For a story about Valek, the film does a lackluster job of explaining why the demon chose this specific monastery and what its ultimate goal is by becoming a nun.

While both Farmiga as Irene and Bichir as Burke deliver solid performances, they never feel essential to the story. Much like the evil nun herself, they appear to be nothing more than props placed sporadically. Think of it like a game of Clue: players move to one room and earn some sort of clue to answer the overall mystery, but there’s not much explanation with each discovery. The greatest moment of this randomness involves a scene where Father Burke finds himself trapped in a grave. While that can be an unsettling idea, it feels like nothing more than a set piece for something spooky to happen. Then, once he’s rescued, he finds clues that supposedly answer questions, but he has no reason to think they would other than because the script told him to.

The other Conjuring films aren’t exactly deep and do rely on crafting scenes that are designed to terrify, but there’s typically a reason for the characters to be in that situation. By the time we get any indication that the evil nun is genuinely on the hunt for Irene and Burke, we’ve already endured several B-plots about the remaining nuns and a ghost boy. In turn, the final act’s attempt at giving more of an identity to Valek falls flat. A strange conceit about the blood of Jesus Christ (yes, the Jesus Christ) also doesn’t help.

In the end, The Nun is nothing more than an exercise in seeing how much can be milked out of this universe. Connections are established between these characters and the other films we’ve been given, but they seem more like retcons than actual answers. Some of the scares are fun, but a majority of the experience is bland and doesn’t use as much of its setting and tone as it should.