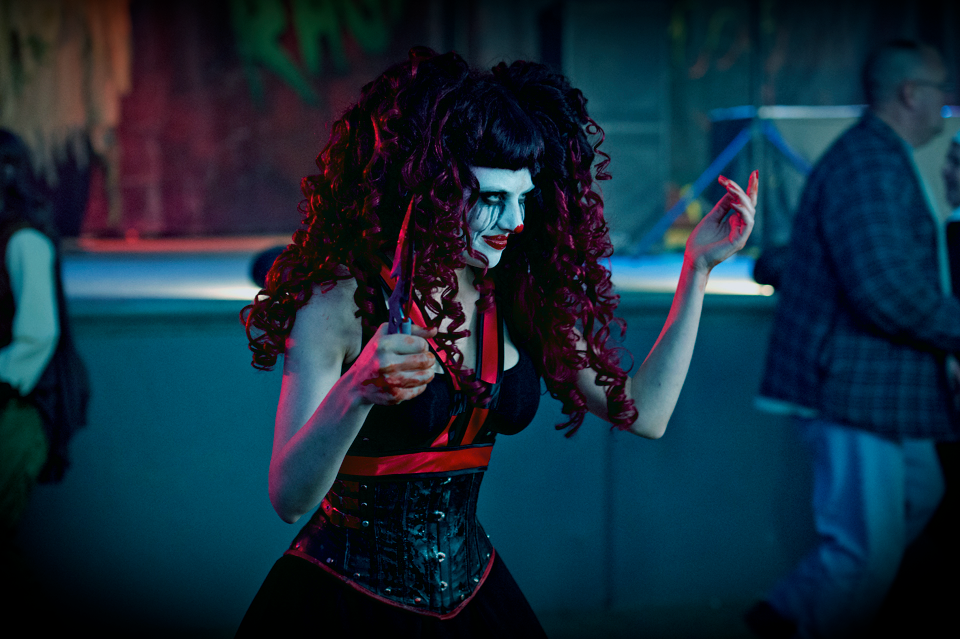 When horror movies spend too much time in the arthouse, audiences get antsy for some old-fashioned filth. The Funhouse Massacre’s title foregrounds its subject matter with such brutal frankness it sounds like a campaign promise. “Get ready for 90 minutes of trash,” it screams, “and if you don’t like it, you have no one to blame but yourself.”

On Halloween Night, a motley arrangement of six vile sadists and cannibals escape from the Statesville Asylum and make their way to a local theme park. As it happens, the park is trying to capitalize on the urban legends surrounding these very killers, and has hired actors to play them in sets depicting their most savage crime scenes. Quicker than you can say “Should we walk out of this movie?” the killers have dispatched the stand-ins and taken their rightful place in these gory dioramas, eager to turn unwitting fair-goers into the funhouse’s new main attractions.

The Funhouse Massacre bounces between several bands of victims-in-the-making: the owner of the funhouse, the police officers following leads from an unsolved murder, and the waitstaff of a local diner looking for distractions after closing (one of the movie’s better ideas is that, instead of the gang of friends that slashers typically feature, here they’re coworkers who all hate each other). The cast is huge, including Robert Englund in a sadly forgettable cameo, and the sprawl and the script’s lack of focus keep you from getting bored by repetitive kills.

But after spending over half an hour as a lurid Hostel wannabe, the film decides to remake itself as a winky, Whedon-ish satire full of hipstery humor (“Why were you afraid of me? Because of my awkward running skills?” one victim delivers flatly after being shot by a jumpy police officer). With a jolt, suddenly the killers aren’t scary, they’re funny, and the splatter spirals straight into slapstick. There are some worthwhile bits (E. E. Bell as the cannibalistic cook has an instinct for comedy nearly all of his co-stars lack), but I guess if you throw the bar that hard into the dirt right out of the gate it’s pretty easy to step over from time to time.

Though the dialogue is terrible (“Do you want a corndog?” a man asks his girlfriend after sex in the funhouse bathroom. “I think I’ve had enough meat tonight,” she replies), the situational humor shows promise. The conceit of teens and twenty-somethings giggle-screaming their way past actual torture is a good one, and in the hands of, say, Edgar Wright or Jason Lei Howden, this could have been an excellent horror comedy. In very rare moments--such as when the protagonists realize that the dummy in “Dollface’s” exhibit is really a living girl with her mouth and eyes stitched shut, trying to scream--the slide from uncomfortable laughter to terror induces real thrills.

More often than not, The Funhouse Massacre is like a tone-deaf talent show contestant, aiming for the right notes and never understanding why he isn’t as talented as his idols.