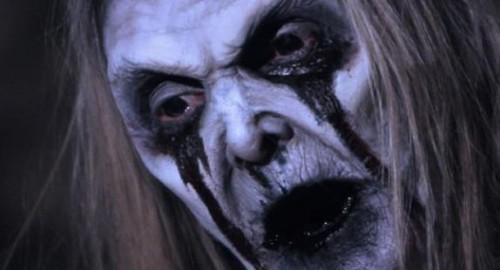 Horror films need a set of rules. Given all the insane, supernatural things that occur in them, the viewers need to know what can and can’t happen in the film’s universe so that they can properly react to what they are viewing. For example, we know that in “Evil Dead II” the dead are raised by the incantation of a passage from an ancient text and that the only way they can be stopped is for another passage from the book to be read aloud. Because this is clearly established, the viewers feel a sense of suspense when the passages from the book are at risk of being sucked into a vortex, because they know that they are the only way that the protagonists can survive. “Damned by Dawn” never establishes the rules of it’s universe that are needed for the viewers to feel anything. As a result, it’s difficult to care about anyone or anything that happens in the film as you ultimately never really understand why anything is happening or what needs to be done for the horrors to stop. Despite everything going on in it, there is never any sense of suspense, making the viewing experience very flat, dull and ultimately not worthwhile.

The story starts off fairly simply, then spirals out of control. Claire and her boyfriend Paul are on their way to visit Claire’s family for the first time in a year and a half. We learn that Claire’s grandmother Dawn is on her deathbed and doesn’t have much time left. That night, sensing that she’s about to pass, Dawn warns Claire that the “lady of sorrows” is coming for her tonight and not to interfere. As predicted, that night the family is tormented by ear-splitting screams coming from the woods surrounding the house, and a Banshee comes for Dawn’s soul.

Of course, Claire goes and interferes by pushing the banshee off of a balcony, impaling it on a fence post. The banshee’s screams awaken the dead which then begin to pick family members off one by one. This is where things go off the rails. Things start off with ghost zombies with scythes flying around the woods killing people. Then we have the banshee dragging Dawn’s body off into the woods. Is she dead? Is she alive? Who knows? What was the Banshee going to do before it was pushed off the balcony that’s any different than now? It has the body, is it just pissed off because it was shoved? How does one shove a ghost anyway?

Things continue to happen without any explanation whatsoever. We find out that the flying ghost zombies can be killed with a shotgun blast to the head, which brings up the obvious question, why can’t the Banshee itself then be hurt? Family members then start coming back from the dead as real, non-ghost zombies, with no explanation why. Of course, we didn’t know that this is possible, so the first time it happens we’re simply surprised. There’s no added suspense from knowing that the dead will soon start to rise and join the ranks against the family. Because we have no idea what to expect, that’s all this film manages to do, temporarily surprise you, and then leave you thinking “huh?” My thought process during this movie was basically:

“So there’s flying ghost zombies now, huh. Oh wait, now we have real zombies? Okay I can live with that. Oh, and now the banshee’s back. And she can make people explode by screaming. Why didn’t that happen earlier? Wait a minute, now there’s underground caverns with more zombies? And now there’s a magical urn? And now there’s a diary that says that Dawn’s body must be cremated? I thought the family just wasn’t supposed to interfere? Was the banshee going to cremate the body after it was done with whatever the hell it was supposed to do? What the hell is happening?”

This film proves that simply by adding more and more things to a movie, you can’t ratchet up the suspense. You can have zombies and ghosts and vampires and fucking velociraptors, but none of it will mean a damn thing if the viewer doesn’t understand why they’re there or what’s going on. You can only surprise a viewer so many times before they get desensitized and just expect to be surprised with things that don’t make sense. If the rules were spelled out more clearly and earlier in the film, this could have been a pretty decent flick. Instead, I found myself confused and totally detached from the film. I won’t spoil the ending, but this continues all the way up to the last scene of the film. Nothing makes sense. Things just happen, then more things happen, then some more things happen and then the film ends. No rhyme, no reason, no explanation.

I also have to address the special effects. I know this film was shot on a low-budget, but most of the special effects are done in some of the worst CGI I’ve ever seen. The flying ghost zombie things look horrible, and their impact is deadened by the fact that they look so fake and clunky that no one could ever be scared by them. The sets are constantly blanketed in CGI fog, that makes everything look like it was filmed on a green screen. Even worse, the practical effects in this film, as few and far between as they are, look great. There are a few scenes where the fog is real, and the atmosphere in those scenes is great. The film is set in a remote, isolated section of Australia, and when the attention grabbing CGI isn’t present, it works really well. Unfortunately, these effects are extremely limited.

Alfred Hitchcock said it best when he described the difference between surprise and shock. If there’s a bomb under a table where two characters are speaking, if it just suddenly explodes without anyone knowing it’s there, it’s a surprise. And it lasts seconds. However, if the film-maker shows the bomb minutes before it’s supposed to explode, the audience will be in suspense for the entire scene, waiting and wanting the characters to realize what’s going on. This film never shows the bomb, and as such, it won’t stay with you longer than a few seconds after you’re finished. Sadly, it’s totally forgettable.