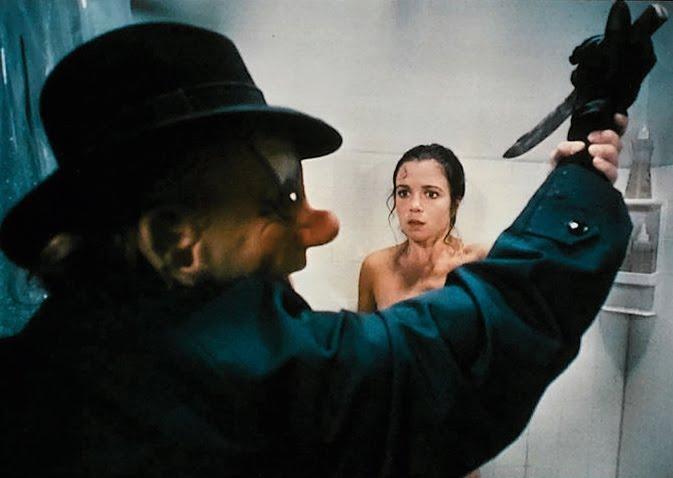 Tobe Hooper’s “The Funhouse” has gotten a good bit of flack from fans and reviewers alike for being a boilerplate pseudo-slasher with little invention to fire the viewer’s imagination. A casual reading of the film certainly reinforces this idea and even with deeper consideration it is never comparable to the gritty, southwestern chainsaw masterwork that landed Hooper a permanent seat on the list of modern horror forefathers. But Arrow’s recent Blu-Ray re-release of the film did provide me with enough clarity to give the film a second thought. What I found was that there is a lot more going on in “The Funhouse” than many have given it credit for. It may not be, eh…hem…virgin territory for slasher films it does utilize an approach to its ideas that suggest Hooper’s motivation, at least partially, was to psychologically deconstruct the early 80’s horror phenomenon.

“The Funhouse” opens with a POV homage to “Halloween” that morphs into a “Psycho” nod. The sequence also features a bit of nudity which looks for the entire world to be unmotivated. By the end of the film we understand it to be a sly statement about our heroine’s relative innocence rather than a justification for the killer to off an ill-bred tartlet in scene one. Our heroine Amy shakes off an annoying little brother, the warnings of her father and the icy disdain of her alcoholic mother in time to make it to the carnival on a first date with a beefy, Bruce Jenner look a-like named Buzz. Along for the ride is Amy’s best friend and anti-virginity crusader Liz and her nerd-too-bold boyfriend Richie. The quartet enjoy cutting holes in the peep show tent, laughing at Carnies and arguing with besotted tramps who seem to have escaped paying the entrance fee. After those shenanigans lose their appeal the four horny teens decide to play hide and sleep on the funhouse ride so that Amy can slough off the pesky yoke of virginity. As bad luck would have it they witness the murder of a fortune teller by the deformed son of the Carnival owner. This leaves the fearful foursome to spend the remainder of the night trying to avoid being killed in an amazingly well secured Carnival ride.

What Hooper has done here is to lay bare the carnal carnival of Amy’s journey to womanhood and represent each step into maturity with a threat or disillusioning loss. So central is this idea to the film that story and even character are subverted in order to represent Amy’s bewildering adolescent foray into sex. Amy ignores the warning of her dad only to find herself alone in Buzz the gas wolf's car. Buzz promptly calls into question her father’s integrity and she confronts him about it but eventually relents and takes his hand for the rest of the journey through her night of loss. At the carnival she is accosted by a troll woman, functioning as her mid-western conscience, who warns her of God’s watchful eye, but still she presses forward. Amy peers through a hole in the peepshow tent to watch aging strippers grind dolefully to appease a rabid gang of old drunks who were promised a younger window model at the door. Still heedless after a few hours touring this testosterone hothouse of toxic titlation Amy decides she is ready to spend the night in the funhouse. Inside the menacing ride Amy’s virginity (innocence) is figuratively taken as she watches her hormonal and impulsive friends commit to bad decisions and disappear down the libidinal rabbit hole. At one point her father is standing just a few yards away from the ventilation shaft where she is trapped but he cannot hear her pleas. She is committed to Buzz. He is the man who will usher her into a decidedly male world of adult sexual encounters. She’ll find out soon enough tat he is no ‘Daddy’ and his role in her life will be very short one with none of the softness she might have wanted. How do the killers fit into this big allegorical puzzle? Like they do in every other horror flick, by playing the role of the unchecked male sex Id. Only this horror flick features the most *spoiler alert* vaginal dispatching of a sex monster ever committed to film.

Technically, there is a lot to like here. Arrow’s new transfer really cleans things up, bringing out some of the great lighting choices and impressive compositions that Hooper and crew masterminded. The music and the way in which the practical FX are utilized for optimal payoff are signs of a confident directorial hand. The new-found clarity also elucidates just how this film functioned as a bridge from ‘Chainsaw to “Poltergiest”. In addition to high-level craftsmanship Hooper shares more aesthetically with Spielberg than you might have thought. For those who have long maintained that “Poltergeist” feels more like a Spielberg film than a Tobe Hooper joint, 'Funhouse' is worth a look. Turns out Tobe had a little bit of Mr. Blockbuster in him before their ghostly collaboration of 1982. The edge is rougher to be sure and the dialog is nowhere near the standard of Spielberg’s best kid driven stories, but with ‘Funhouse’ Tobe Hooper gives us an idea of what it might look like if Spielberg wanted to make a violent parable about a teen girl’s sexual awakening.

The film has serious limitations where pacing and performance are concerned. It could have clocked in 10 minutes shorter and saved the audience some drag time. The story and caliber of its villains are nothing extraordinary and the scares are also limited. With that said, I still like this film as much as I like Hooper’s “Lifeforce” and more than I liked anything else in his catalog save for TCM and “Poltergeist”. If you disagree but didn’t hate “The Funhouse” on your last viewing I recommend trying to see the enhanced transfer. If you hated it the last time through, I doubt anything I say or the improved visual fidelity will change your mind.