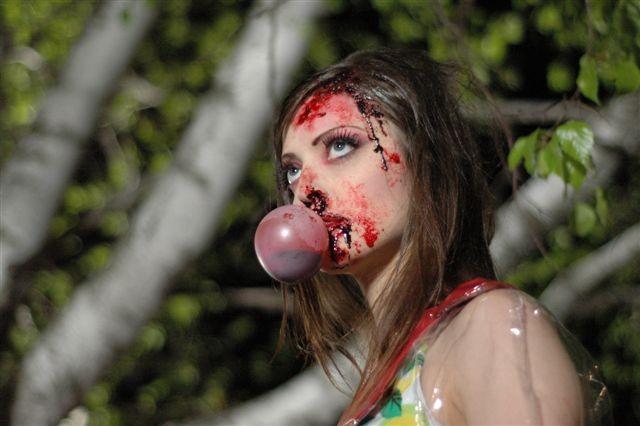 Much like the work of the filmmaker they're paying homage to -- Herschell Gordon Lewis -- "Smash Cut" can be an acquired taste. The acting is forced, the plot is thin, and the production values remain just okay. Fans of Lewis films will be able to see the nuances of what is happening as the reel unfolds, which makes this one an decent enough film on its own.

Able Whitman, played by "Last House on the Left" star David Hess is a filmmaker. He loves to make horror films and sees himself as an artist. His audiences fail to agree however. Met with nothing but harsh criticism, producers coming down hard on him and financiers threatening to pull the funding out from under him; Able is at the end of his rope. While wracking his brain for the needed inspiration to make his next film a winner, Abel finds himself in a car crash that kills his muse, the stripper Gigi. Instead of leaving Able scarred, he finds himself in the lap of inspiration. The ideas roll in as do the bodies when he starts filming on "Terror Toy 2."

For the uninitiated, director Lee Demarbres homage to Herschell Gordon Lewis will look like a mess. Many of the production values from Demarbres earlier film "Jesus Christ Vampire Hunter" are on display here with cheap effects and slightly grainy feel. Similarly, the plot runs loose and thin with little to no attention to tension or the like, concentrating more on cheep jokes and pure unadulterated schlock. Seeing as this is an homage film, it works and strikes the right points. H.G. Lewis wasn't known for high production values or even art; he looked at business and shock, plain and simple.

The biggest tribute paid in "Smash Cut" is gore, which is done quite well. Throughout the film you'll see plenty of organs, body parts and far-fetched murders that will make you both laugh and roll your eyes. Buckets of blood are used throughout the film, both figuratively and literally as we watch Whitman go to work bringing his film to life. None of these moments use CGI at all, which is what makes it all the more appreciable. All of the effects are good old-fashioned Kayro syrup blood and other prosthetics, lending this horror comedy the authenticity it needs. The moments of death are all a bit far fetched as well.

It isn't all sunshine and intestines here, however, as the film does suffer a bit from time to time. As stated earlier, the plot is very thin and easy to see through, so there is little to figure out. As well, we know who the killer is from the very beginning, so there is no tension to speak of. Instead, we're left to watch this through to the end relying on nothing but jokes and kill scenes. This isn't so bad -- they're both fun in an eye rolling fashion -- there just isn't much to sink your teeth into. This forces us to rely on the cast of veteran actors, which in theory should be fine, but in "Smash Cut" some problems arise here as well.

Demarbre manages to lure in a host of known actors for his tribute and it is quite fun to see some of the faces that appear. To kick the film off, you will find Herschell Gordon Lewis himself with a warning about the carnage you are about to see, much like the gimmick he used to promote his own films so many years before. Starring, we see David Hess who you saw torturing teenage girls in Craven's "Last House on the Left". You'll see Michael Berryman, the well known bald mutant from "The Hills Have Eyes" in quite possibly the worst wig I've ever seen on film. Ray Sager, who starred in many Lewis films, his biggest role being Montag the Magnificent in Lewis's "The Wizard of Gore," also features. Rounding out the names, you'll find porn star-come-actress Sasha Grey, shot before she went for the artsier side of film in Steve Soderberg's "The Girlfriend Experience."

As you can see, there is a lot of experience and talent in front of the lens for "Smash Cut," which would lead the casual observer to think that there was no way this could be a bad film. Instead, we're treated to a large number of these actors phoning in a performance, simply to get it over with. Many are flat, many are unrehearsed. Throughout the film you'll find many uncomfortable pauses as they try and improvise lines and fight to come up with something as they go. Once again, this still manages to fit into the theme of reverence to the gore classics that started it all.

David Hess is actually quite enjoyable to watch as he comes further unhinged. He is hamming it up for the masses and enjoying himself a lot as he does so. It's nice to see him in a different light than we're used to from his past roles and it fits him well. On the opposite end of the spectrum, Sasha Grey is rather flat throughout the majority of the film. Adding little in the way of excitement outside of her skimpy nurse uniform, she's chewing her way through her scenes and is there mostly for the novelty factor. She's not horrible, but she does have a long way to go before she'll find herself as a mainstream actress. Watching her recite "Hamlet" while holding her dead sister's head was pretty laughable though.

"Smash Cut" is not for everyone. For fans of Lewis films such as "2000 Maniacs" or "The Wizard of Gore," you'll find a lot to enjoy. If those films were never your cup of tea, you will be turned off from the very start. The film feels much like a Troma production in both plot and aesthetics, and can be fun with the right expectations.

Behind the Mask: The Rise of Leslie Vernon