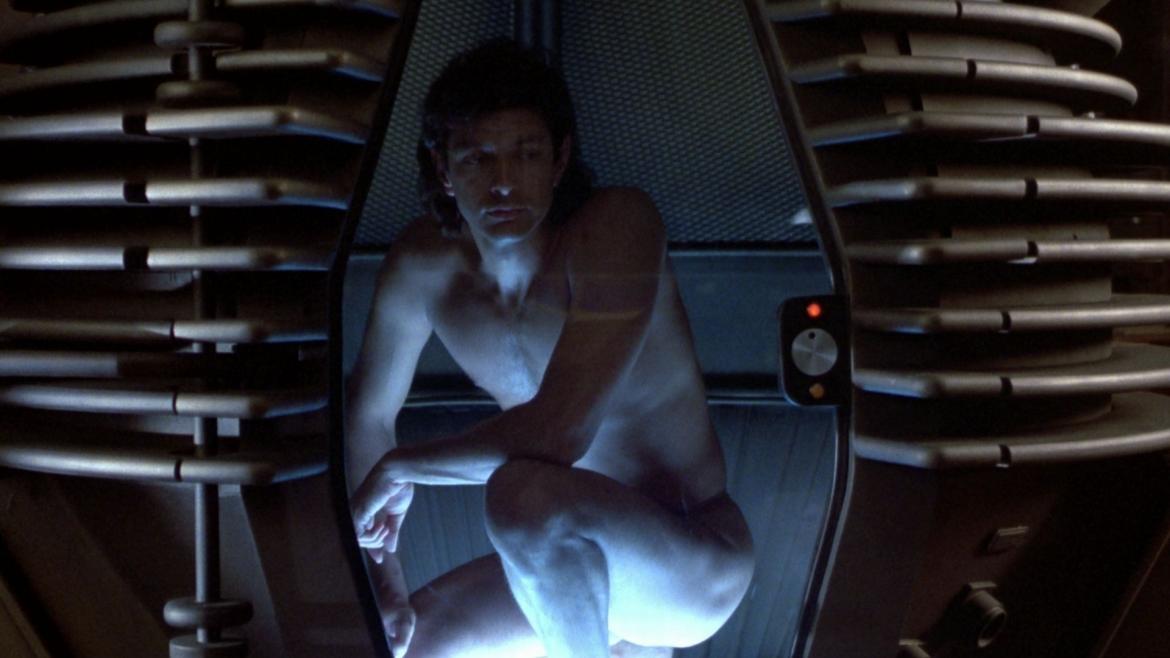 The year was 1993. A pale, chubby, awkward, nerdy boy with nary a whisker in sight was visiting the Universal Studios Orlando Resort with his family. While there said boy witnessed none other than “Ghostbusters Live” and traveled down a dinosaur’s gullet in the “Back to the Future” ride, both of which that now bearded still awkward man remembers clearly. But the pièce de résistance was a Horror themed makeup show in which two hosts vying for Penn and Teller level displays of misdirection and illusion demonstrated a variety of special effect techniques. The climax of that particular show was an “experiment” that went awry spawning an increasingly grotesque man-fly that emerged from different points on the stage, flinging goo, shrieking, and scaring the ever living hell out of said boy.

Before I even saw David Cronenberg’s 1986 The Fly the film’s influence on popular culture had run as deep as a “plasma pool”. With groundbreaking effects work from Chris Walas’s company and a tagline as memorable as that of “Alien” the film’s surfaces were already at the height of genre film offerings in the mid-1980s, trading on a brand of high concept science-fiction horror that was beginning to usurp the influence of Slashers. Add to this Cronenberg’s emerging reputation outside of genre fandom, one of Howard Shore’s best scores to date, and genuinely affecting performances from it’s leads The Fly stands as an exemplar of genre cinema that revels in its craft while also developing a narrative fraught with mythic levels of tragedy.

Itself a remake of the Vincent Price starring 1958 film based on a novel by George Langelann, The Fly centers on physicist Seth Brundle’s (Jeff Goldblum) attempts to perfect teleportation. Striking up a professional and romantic relationship with science-mag journalist Veronica “Ronnie” Quaife, Seth finds the inspiration that will finally allow him to teleport organic matter. But after a drunken night of jealousy fuels a rash decision Seth comes to the frightening realization his invention has some unintended consequences.

The accomplishments of The Fly have been well documented. You can read much more detailed, thorough, and intelligent readings of the film and it’s cultural impact by a number of authors. (Jason Zinoman’s “Shock Value” is one recent entry into the conversation. Though not addressing The Fly explicitly he does place Cronenberg’s career in context with his contemporaneous peers). And for all the film’s masterstrokes of technical prowess it is the gestures toward instinctual fears that make full our acceptance of the pretend terrors on screen. Contagion, boundary transgression between human and animal, guilt, and regret are simple yet core principles from which the film derives continually affecting moments.

But if there is something about The Fly which places it above Cronenberg’s other already accomplished work in the 1980s, it is the grounding of the film in the emotional drama that unfolds between Seth, Ronnie, and her former lover & current boss Stathis Borans (John Getz). That Stathis becomes a key player in the events that unfolds offers another reading of the film as a breakup drama, making more complicated notions of sleaze ball villainy by contrasting his actions with Ronnie’s agency and Seth’s futile, forlorn, and even monstrous attempts to reclaim it.