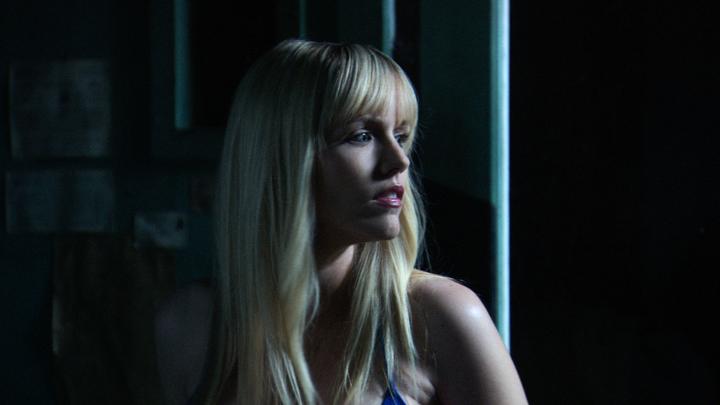 Although the film is about as graceful and nuanced as a hormonal paraplegic at a Tijuana donkey show, you’ve got to appreciate the sheer audacity of director Geoff Klein’s feature-length debut “Bikini Girls on Ice”. The title pretty much sells the entire plot: Females in skimpy bikinis being put on ice, plain and simple. Unless your reading comprehension skills are grossly underdeveloped, you should know precisely what you’re getting into when you pick up a movie with a title as subtle and cunning as “Bikini Girls on Ice”. Problem is, do you really want to watch a movie that offers nothing beyond scantily-clad women being hacked to pieces by a deranged killer? Don't let your crotch answer that question.

If you responded positively to the question posed in the previous passage, the rest of this review may not settle well with your slasher-centric sensibilities. Sure, I love cheesy, inane horror movies as much as the next maladjusted suburban moron, but “Bikini Girls on Ice” is ultimately a little too simplistic for my questionable tastes. Is it wrong that I demand more from a movie than a slew of half-naked twenty-somethings washing cars while a sadistic killer with a refrigerator fetish runs amok? I know this may sound a little odd coming from someone who shamelessly sings the praises of such infected cinematic secretions as “Mega Piranha” and “Birdemic”, but even I have standards. Kind of.

In case you still haven’t quite figured out what this titillating endeavor is all about, let me put a finer point on it: A group of sexy collegiate soccer players join forces with a pair of dim-witted fraternity types to raise a little money washing automobiles in their bikinis. When their bus breaks down in the middle of nowhere, the group makes the ill-fated decision to polish vehicles in front of a seemingly-abandoned gas station. As per usual, a deranged homicidal maniac is lurking nearby, one who’s really into murdering attractive women and dry humping antique soda machines.

Geoff Klein seems to have a thorough understanding of the slasher formula, and occasionally employs this knowledge to great effect. Assuming, of course, that this sort of paint-by-numbers approach to horror filmmaking is your cup of tea. Personally, I've never been a huge fan of the slashers, particularly those that bring absolutely nothing knew to the cinematic table. "Bikini Girls on Ice" might be mildly entertaining in its own weird way, but it never once strays off the beaten path. Kudos to Klein for skillfully executing a well-worn, old-school formula, but at the end of the day, the "same old thing" really isn't going to cut it.

Even if you can forgive the script’s numerous shortcomings, you simply cannot deny the fact that “Bikini Girls on Ice” lacks an interesting villain. Sure, his hair might be long and greasy and his attitude might be violently surly and generally unpleasant, but there’s nothing about him that’s even remotely remarkable or noteworthy. When you think back to slashers that have left their mark on the genre, you instantly recall the film’s unique antagonist and his or her assortment of distinctive kills. Klein’s flick has none of these, which makes the experience less than memorable.

My opinion of “Bikini Girls on Ice” might be a little skewed, as I don’t tend to gravitate towards pictures of this nature. It’s worth mentioning, however, that Klein’s ambitious albeit empty-headed approach to the slasher genre is several notches above your typical no-budget direct-to-video release. Some people will probably love this thing, and spend several long hours composing nasty e-mails explaining in great detail how utterly pathetic I am for expressing myself in such a negative manner. All I can say it this: It took me three days to finish “Bikini Girls on Ice”, and that’s including the night I downed three Red Bulls in just as many hours. Make of that what you will.