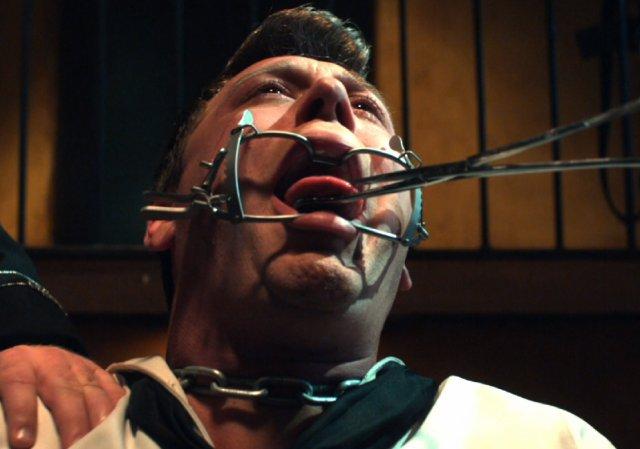 Torture horror: the fledgling low-budget filmmaker's best friend. Even if you can't string together four words, chances are you can point a cheap digital video camera at some friends and pretend to violently torment them for roughly 90 minutes. I've never been a huge fan of this sort of dodgy entertainment, mostly because I think it's the easiest to execute. There's nothing remotely scary about them, and even the strongest efforts are emotionally defunct and morally suspect. Of course, this is coming from someone who thoroughly enjoys movies like "Tokyo Gore Police" and "Meet the Feebles", so in regards to morality, I'm a bit of a hypocrite.

Joey Stewart's uncomfortable 2009 outing "The Final" is a torture horror film of a different caliber. Instead of a terminally ill psychopath giving drug addicts and degenerates a second lease on life, we're presented with a group of bullied high school students who endeavor to disfigure and humiliate the bullies who've made their existence a veritable Hell. The inspiration for their technique is derived from watching horror movies, which, I’m assuming, included a screening of Takashi Miike’s “Audition”. The film is frequently disturbing, not to mention understandably controversial.

Although Stewart’s execution of the material is occasionally too theatrical for its own good, my issue with the picture isn’t exactly technical. No, my problems with “The Final” lie in its irresponsibility, and it’s association of horror with school-related violence. Given the propensity of today’s persecuted youth to savagely gun down their peers at the drop of a hat, isn’t a film that portrays these vengeful kids in a positive light a little negligent? Am I giving Stewart’s feature too much credit? Am I reading too far between the lines? Or have I missed the point entirely? I'm honestly not sure.

I’ve always been a firm believer in sacrificing sacred cows and broaching taboo subjects. In my opinion, it’s the only direction horror can go and still remain relevant. “The Final” forces us to look at a contentious subject -- in this case, the repercussions of high school bullying -- from the viewpoint of a group of disturbed teenagers who have been pushed over the edge. It’s hard to look at, especially once their hostages begin begging and pleading for mercy. The instruments of revenge are cruel, the damage inflicted irreversible. It’s a horror movie in every sense of the term, and it has potential to deliver a message that reverberates.

Stewart's penchant for sensationalism, however, cheapens the experience. It’s not the premise that’s offensive -- it’s his interpretation of it. It’s too serious and self-righteous to qualify as a cheap “Heaters” imitation, and it’s way too dorky to be taken sincerely. The group’s leader, a maniacal windbag named Dane (Marc Donato), spends the majority of the film preaching his warped gospel to a captive audience like a cowardly dictator drunk with power. Dane’s dialogue is the stuff of high school poetry, long-winded diatribes that ultimately boil down to an “oh, woe is me” mentality. The inherent silliness of his bravado, combined with some extremely goofy action sequences, makes me wonder if the story is just another excuse to cut off fingers and severe spinal chords.

“The Final” is easy exploitation. It's a topical film that stirs controversy, yet has no idea what it really wants to say. The opening and closing segments suggest that the bullies got exactly what they serve, that the violence perpetrated against them was valid. Justice has been served. Is that really the image you want to sell in an age where kids are murdering kids without batting an eye? I'm sure people will tell me to loosen up, that I've taken a simple horror flick and twisted it completely out of context. However, from where I'm sitting, "The Final" glorifies high school violence on a level I'm not entirely comfortable with. The film might sport solid camerawork and plenty of intriguing performances, but it's not enough to disguise its misguided message.