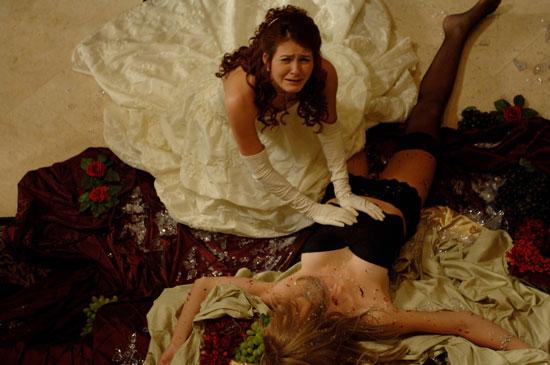 Two rich southern siblings throw a ‘Debutante Ball’ for a fellow socialite and friend. Instead of being a straight up honor to said friend, the siblings are throwing the party as an excuse to pull the ultimate April fool’s prank on another local socialite, ‘Milan’. All’s well and good as far as the prank plan goes until Milan winds up dead. Cut to one year later; the siblings Desiree and Blaine receive a mysterious invitation that states ‘meet me at Milan’s grave. I have proof.’ As the group gathers together on the anniversary of Milan’s death, it soon becomes apparent that some one is out for revenge. One by one the circle shrinks until they’re left with two; will they all die? Or is it all a wicked prank of it’s own?

I piss and moan about remakes; a lot. I don’t like them, it’s no mystery; still for the most part I can understand why the studios want to remake a film and sometimes I can get behind a different directors vision and enjoy the end product for the most part. This version of "April Fool’s Day" being dubbed a remake of the 80’s original didn’t fill me with much hope from the onset, but I had some minor expectations, especially considering that the original ranks amongst my top five favorite slashers ever.

There are many problems contained in this direct to video version of "April Fool’s Day", first and foremost of which is that it has absolutely jack shit to do with it’s predecessor. The tiniest fragment of the premise is the same; they give a nod to the original with a ‘party’ at the beginning and things not being as they seem in the end. That’s it. There’s no other connection here.

Adding insult to injury, the characters written in this ‘new’ take are down right horrible. The film is littered with Paris Hilton and LiLo knock offs, cheap ones at that, and there is absolutely no compassion generated for these people. A bunch of jack-ass twenty somethings running around acting like fancy grown ups, there’s zero development and zero effort given to make you sympathetic to their cause. As a matter of fact, the snooty appearance of the ‘gang’ makes you outright hostile towards them. With no connection to the characters, sitting through the entire 1.5 hours becomes a chore.

Crappy acting doesn’t help matters either. Nobody here turns in a good performance or even attempts to give life to their characters. Phoned in from all fronts, it’s quite obvious from the get go that these pretty faces are doing nothing but padding their portfolios in a shitty teen drama that makes ‘The O.C’ look compelling. When compared to the cast of the original, and how can you not it’s a remake for christ’s sake, this casting call is pathetic. Taylor Cole can’t hold a candle to Debrah Foreman and frankly, they should be ashamed for even trying.

To make this even more disturbing, this movie was written and directed by The Butcher Brothers who brought us the standout from last year’s After Dark Film Fest entry "The Hamiltons". "Hamiltons" was so forward thinking and original, it was one of my favorite horror flicks from 2006. Seeing the Butcher Brothers name connected to this it leads one to wonder if they were a fluke or if they found themselves a fun project which was in turn crippled by studio involvement. Regardless, the movie was crap and a major disappointment when seeing their name attached.

"April Fool’s Day" has officially won the vaunted title of ‘Movie I Fucking Hate the Most of 2008′. I’m normally a pretty big supporter of the Direct to Video bin but this one just makes me hate my job. It’s that bad. If you’re at the video store with $5 to blow and an hour or two to kill, do yourself a favor and rent the original.