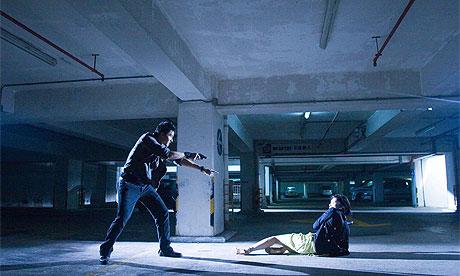 Cherished Hong Kong filmmakers Tsui Hark, Ringo Lam, and Johnnie To struggle to pool their creative resources in the 2007 heist-gone-awry thriller "Triangle," a feat which is, if nothing else, ambitious. Considering the quality of talent operating behind the camera, you'd expect this sort of movie to pop and sizzle on-screen, regardless of how complicated or contrived its script may be. The end result, I'm sorry to report, isn't nearly as cohesive or entertaining as one would initially believe, though it may provide considerable satisfaction to hardcore devotees with a thorough working knowledge of the each director's respective filmography. Beyond that, I strongly doubt the feature is versatile enough to capture the imaginations of casual audiences.

Each director handles a specific section of the story, with individual segments running between 20 and 30 minutes, give or take a cluster of seconds here and there. Tsui Hark -- who, coincidentally, masterminded the entire project -- tackles “Triangle’s” intricate opening act, a veritable tapestry of twisty subplots and vague motivations. It quickly becomes apparent that the kinetic filmmaker has bitten off more than he can chew.

Lam complicates matters to the point of incoherence, delivering a dark, plodding midsection that only works to further exacerbate Hark’s needlessly ambitious storyline. Thankfully, the last and most thrilling aspect of the entire picture is handled by “Mad Detective” co-director Johnnie To, who takes the opportunity to deliver a dazzling, gun blazing finale that‘s genuinely clever and oddly comical. Of course, at this point, most people may have moved on to greener pastures.

The problem is simple: There are simply too many chefs executing stylized recipes in the cinematic kitchen. If you’re at all familiar with the work of Hark, Lam, and To, watching the talented trio attempt to meld three admittedly different chapters into one complete package makes for an evening’s worth of solid entertainment, even if their individual styles never properly blend together. Most of this is apparent in the film’s multitude of loose ends and dangling subplots; what one director begins isn’t necessarily wrapped up in the subsequent segment, which often makes for a jagged, frustrating experience. These guys are capable of so much more.

Despite the picture’s numerous stylistic and scripting issues, its cast -- which includes Hong Kong staples Louis Koo, Simon Yam, and Honglei Sun -- do an admirable job of making you believe these desperate working class clowns could effectively smuggle a mysterious cache of golden treasure from the depths of a government institution. And while you never really get a clear understanding as to why they’d risk their lives assisting gangsters with armed robberies, the trio do what they can to make you care about their characters. There's not a weak performance in the bunch.

My disappointment with “Triangle” is profound, and I’m sure it had everything to do with personal expectations. Although I’ve only recently discovered the films of Johnnie To, I’ve been a Ringo Lam and Tsui Hark fans for years. Like so many others, I was anticipating a movie that would nimbly kidnap my attention for roughly 90 minutes, and, in the process, provide some mind-blowing entertainment overflowing with style and originality. Sadly, this just isn’t the case. The talent is certainly there, but when you pause to acknowledge their previous accomplishments, the scuffs and blemishes become all too clear. A valiant effort nonetheless.