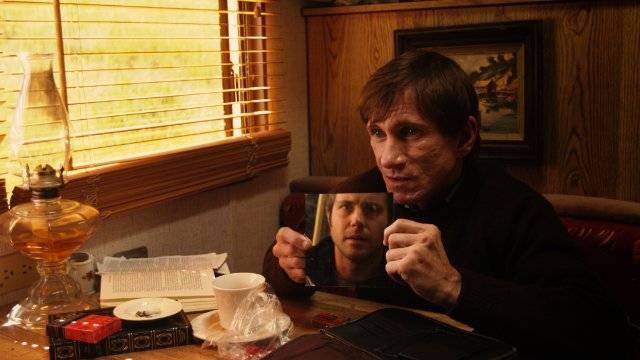 I have rituals in my mind that I like to perform while I’m watching a film. First, I clear my mind of any preconceived notions or assumptions of what I’m about to watch. Second, I try to lay out the flow of each act to see, in the end, if the plot points throughout pay off. And the last thing I do is put myself in the position to ask: if I was given the first half of the script, how would I finish this movie? The first two rituals are to aid in my understanding of the technical side of the filming, but the last part is purely a test on the predictability of the movie. We’ve all been conditioned to expect a twist, especially in horror films, from today’s releases. Most of the time they’re easy to call out from the beginning by connecting all of the informational dots given. This is not necessarily a negative outcome either if the expectations are enjoyable. However every now and then I can’t come up with an answer to my last ritual. That is exactly what Justin Benson’s latest film “Resolution” delivers. The film manages to create a tension filled atmosphere mixed with comedic and light moments forming a horror mystery that is beautifully paced and hard to predict.

“Resolution” tells the story of Michael, played by Peter Cilella, who is formulating a way to get his best friend Chris, played by Vinny Curran, clean from his cocaine addiction. Chris lives in an area of deserted hills that junkies and drug dealers congregate to in the hopes of escaping the world. Michael handcuffs Chris to a pipe in the house and explains that he’ll keep Chris there for a week to detox. After Chris objects and pleads we are taken through the first two days and shown that Michael has dealt with Chris and his addiction before and this is the last attempt to get his friend clean. It’s a clever set up because it achieves two things at once. For one it gives us a reason not to question why the characters wouldn’t just leave when horrific events begin to unfold. Also, we’re given Chris and Michael’s entire friendship history in these subtle set ups. On the third day two junkies come to collect money that Chris owes them but Michael turns them away. A man named Charles also comes to the house claiming he owns the land and tells Michael that if he doesn’t pay him then he’ll kill them both. At this point the plot is still fairly simple and easy to follow, but the horror hasn’t come into play yet. This a testament to the pacing that Benson sets up throughout the run time. Unlike most horror films today, Benson is harkening back to Hitchcock timing by building the suspense and laying out all of the possibilities of what could unfold in the final act. Michael begins to find old journals, film reels, damaged pictures, and archaic paintings depicting different stories. These “stories” are never explained or focused upon heavily which builds more of a mystery around what is happening. Throughout this time we’re taken back into the main plot of Chris and Michael’s friendship where Benson throws in very successful comedic moments that are completely unexpected due to the tension in the air. All I can say is at one point the shock of a suicide attempt also had the biggest laugh of the film attached to it.

Eventually the real horror begins to creep its head into the story. Recordings of Michael and Chris talking are found each day as if some unseen individual or presence is watching them at all times. Benson gives little pieces to a big puzzle that at times seem to never fit anywhere but are never too farfetched to accept. These recordings obviously point to the main threat in the film but the motive or person behind them are never quite clear. This creates an increased amount of tension each time a new character steps into the story. Could this be the person recording them? Is it a person at all or a supernatural source? Among these clever and tension filled set ups, Benson works in several “jump scare” moments that are truly successful. Much like John Carpenter’s “Halloween”, this film knows how to take pacing cliches and turn them on their head to give the audience a feeling that anything can happen at any moment. Needless to say other films of today are similar in style but they are few and far between making “Resolution” a breath of fresh air. By the end of the film the true twist is revealed and although it leaves a finale that is open to interpretation, the ride to it feels well traveled.

This is the first theatrical release for Justin Benson as a director, writer, producer and cameo actor. The strengths of “Resolution” are in the pacing, character development and cinematography which help make this film stand out in today’s world of fast paced gore cliches. The acting at times is somewhat downplayed in Michael’s character while Chris goes too over the top to fit into the atmosphere created. Some of the minor characters introduced never pay off to the finale and ultimately their scenes could have been cut without sacrificing the overall mystery. Benson clearly has his finger on the past and present pulse of the horror genre. He cleverly references many cliches and manages to mix horror sub genres into a well detailed story of friendship. While his slower pacing may not work well with current audiences, it’s clear that Benson has a strong future in the horror world.