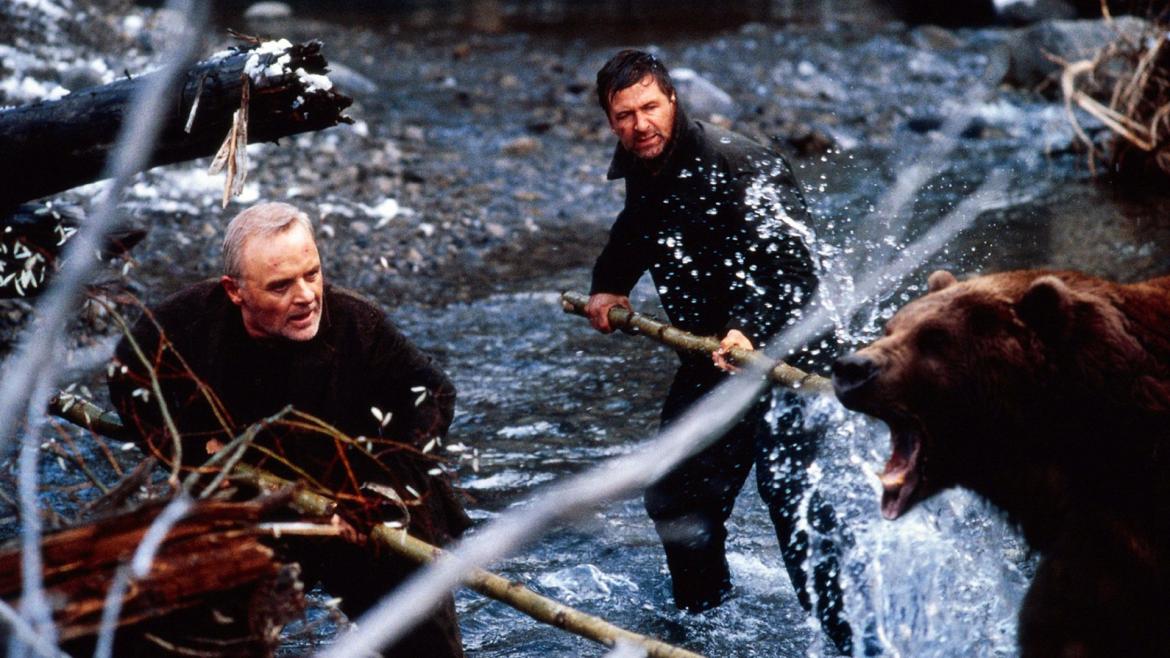 Countless movies since Steven Spielberg's shark masterpiece came out tried to use the tag "Jaws, but with [Insert Predator Here]." In the case of Lee Tamahori's 1997 bear attack/survival thriller the tagline seemed more qualified than most--the DVD box art boasts a catchy spin on the aforementioned sentiment, "Jaws with claws." Tamahori's film is of course not genre darling that Jaws remains to this day, but The Edge holds up well thanks to some dynamic performances from Anthony Hopkins and Alec Baldwin.

A trip to the Alaskan wilderness becomes a fight for survival for billionaire, Charles (Hopkins), and photographer, Richard (Baldwin), when their plane crashes while searching for a local hunter for a photo shoot. With limited supplies they must fight not only the elements, but a blood thirsty Kodiak bear that is relentlessly hunting them.

Bitter cold, desperation and a massive bear would be enough of a wave of tension to ride for most filmmakers. The Edge has a plethora of cinematic chills at its disposal thanks to the photographic setting and David Mamet's theatrical script. Character dynamics play heavily into life and death stakes, adding the extra layer of depth. So, when Hopkins and company aren't running for their lives from Bart The Bear, they're never truly at rest as personal animosity boils underneath the ice cold relationships at the center of the plot.

Tamahori manages to capture some incredible shots--both of the picturesque locale and action sequences featuring a very real bear interacting--often violently--with the characters. Bart The Bear, a prolific animal performer in his time, stomps and roars around on screen making his presence ominous even when he's not visible. Even when the film doesn't rely on the intimidating predator the performances of Hopkins and Baldwin sizzles with tension. The two have a transparent distrust for one another so it's just a matter of time before the shoe drops and the biggest threat to their survival becomes each other.

The Edge remains an impressive late 90's survival thriller--continuing to outshine some of today's modern survival and bear attack themed thrillers. The film didn't rely on flashy special effects and instead thrives on a baseline of masculine vulnerabilities, survival techniques, competition and technical stuntwork to tremendous effect. If nothing else it's an effective reminder that being eaten by a bear would be excruciatingly unpleasant.