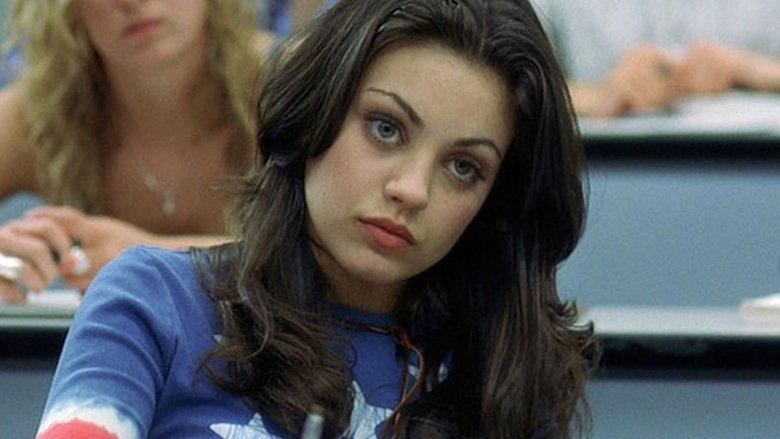 It's no rare occurrence when a successful horror film gets an unexpected sequel, however when the original film is based off of a novel, it seems almost impossible to carry on the story without the original creators involvement. Just two years after the release of the cult classic American Psycho hit theaters, a continuation of the Patrick Bateman story was manifested. If the idea of continuing a story that revolved around an unhinged psychopath seems as insane as the title character's ideals, then American Psycho 2: All American Girl will please in some regards. Thankfully, despite a number two splashed into the title, the overall film is quite different from its predecessor. Starring Mila Kunis in the midst of her That 70's Show fame, the follow-up film attempts to harness the dark humor of American Psycho through familiar fourth wall breaking monologues and dead pan murders, but the trajectory of the plot seems to have no clear definition and creates an experience much worse than anticipated.

Rachel (Mila Kunis) has one goal in life: become an FBI investigator. Her fascination with catching serial killers comes with the slightly peculiar anecdote that she too could be considered a serial killer in her own right. Navigating her life as a freshman and hopeful criminology major, Rachel knows that her ticket to Quantico is gaining the teaching assistant position to Robert Starkman (William Shatner), the school's lead criminology professor. Of course, Rachel isn't the only student working to become a member of Starkman's elite. As her competition begins to stack up, Rachel is forced to take on her inner serial killer persona to take out her adversaries by any means necessary.

The most surprising part of the film is how much it harnesses the 90's. While American Psycho was made as a modern tale in the business and big city aesthetic, American Psycho 2 pulls the "teen life" card in order to bring viewers into the story. Much like Can't Hardly Wait or even Clueless, the film introduces a gaggle of characters that feel fresh out of Buffy the Vampire Slayer with the Whedonesque dialogue ("jeepers"!) and mini skirts on any girl on screen. While this may sound like an intriguing addition to the film, the overall feeling is stale, as if the director was actually from 2016 and didn't know a great deal about what it was like to live in the 90's. On top of it, Mila Kunis is mainly the reason that the film even remotely works. Her presence on screen is strong, allowing the viewer to understand where Rachel is coming from with her decisions. However, that connection only goes so far once the script has her knocking off characters just a few minutes from one another. The point of the machine gun style pacing of kills seems to be for humor, but this definitely doesn't connect in the end.

One of the greatest flaws comes with how far the film goes. The story is set up as a game of watching Rachel move from promising student to promising student until she takes the ultimate prize, however she makes decisions in the end that feel completely out of character and ruin a story that could've been mildly intriguing. If taken on the merits of how the film runs, American Psycho is about the unhinged and unbridled feelings of a Wall Street yuppy psychopath, and American Psycho 2 is about a young psychopath with the intelligence to excel in criminology, but the stupidity to not realize how to cover her tracks.