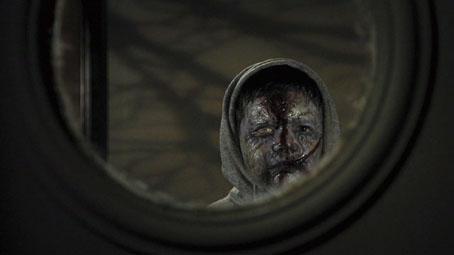 Haunting at the Beacon (The Beacon) (Movie Review)

The connection between physical place and past human histories is at the crux of haunting narratives. The bumps in the night, floating specters, or rattling chains don’t make a haunting, but it is the implied ability of the past and present to fold in on one another with usually horrific results. It seems that because of this implication haunting films are more susceptible to be lazy when providing a reason for the fantastic occurrences. The filmmakers, to a certain extent, can get away with much more with much less explanation. There certainly are a large number of films that have strange events and manifestations occur because the filmmakers have a generic excuse. (I’m looking at you 80s and 90s haunting movies!). It’s a quality that “Haunting at the Beacon” also suffers from, but the film does make several attempts at creating a unique rendition of some old material.

Directed by Michael Stokes, “The Haunting at the Beacon” follows Bryn (Teri Polo) and Paul (David Rees Snell) as they attempt to recover from the death of their only child, Danny. The couple has recently moved to “the city” where Paul has taken a new position teaching astronomy at a local college. The “Beacon Apartment” complex the couple moves into hosts your standard colorful array of tenants including Ty (Nick Sowell) a single twenty-something man down the hall who flirts with Bryn’s sister and Vanessa (Elaine Hendrix) a shrewish aging actress who has taken up hitting on Paul and harassing Bryn. And did I mention there is a police officer named Hutton played by Michael Ironside? (Few things bring out an audible “fuck yes” from me more so than seeing the name “Michael Ironside” in the opening credits.) Bryn wants “to be ready” to continue her life, attempting to squelch any residual guilty feelings of being at fault for Danny’s death.

However when Bryn starts seeing a small boy popping in and out of elevators and hearing screams coming from the boy’s apartment, her old feelings of guilt start to return and Paul feels she is becoming delusional. It becomes apparent that the boy is in fact a former resident named Ronnie who had died some year’s prior along with his mother and father. Bryn, who must have seen her fair share of ghost movies, decides to take it upon herself to help the boy “move on” in the hopes Ronnie can deliver a message to Danny for her. But things become more complicated when it is revealed Ronnie, his father, and some of the other past residents of the apartment building died under unique circumstances.

If we are somewhat familiar with the subgenre we can expect what’s to come. There will be much crying and angry conversations in which Bryn attempts to convince the husband (or boyfriend, or whomever the plot requires to be skeptical) that something is wrong. Personal and romantic relationships will be strained to the breaking point. We are reminded of “Insidious”, “Poltergeist”, “The Amityville Horror”, or even, to a (very) slight extent, “The Shining” and “Don’t Look Now”. Indeed, these films are not so much about ghosts as they are about interpersonal relationship between romantically involved male and female characters. In a way, these types of films are about domestic relationships and the maintaining of heterosexual couplings/families (not to say a good number of horror films aren’t concerned with this theme or mainstream cinema in general). It’s a tradition that becomes apparent in the triangle of Bryn, Paul and Vanessa.

Stokes does his best from keeping the film from becoming too derivative. The set up and first act are fairly typical, this is true. But Stokes creates some different criteria the haunting and ghosts follow that allows for a couple twists. It is revealed that Ronnie and some of the other residents are actually suicide deaths and thusly their ghosts are drawn to people like Bryn, coercing her into relieving her guilt by killing herself. Luckily Paul shares an office with a folklore and cultural anthropologist named Simon (Johnny Cruz) who comes in handy whenever we need some explanation regarding ghosts or the paranormal. It’s a device that results in more than a number of “exposition dump” scenes that involve Simon tossing increasingly larger books unto a desk and flipping open to the exact page. Thankfully illustrations are included. And while this set up makes things a touch more interesting, it is when the film hits its third act that it starts to become increasingly sloppy. Moments that are supposed to be scary are not. How certain actions are framed and presented feels awkward and unmotivated. Not to mention a sub-plot involving a pair of police officers is forced in to deliver another surprise that is completely unnecessary. The dialogue and some of the performances certainly don’t help matters either.

What I always found interesting about these types of films is that there seems to be a decisive line between haunting films that are invested with subjective character experiences of these events and the films that are more concerned with providing the audience with a sensational experience of the carnival-style haunted house. We can think, for example, how a film like “The Shining” depicts a haunting through the subjectivities of Jack, Danny, or Wendy Torrance while a film like “The Evil Dead II” really is more of a ride (not quite a haunting but you get it). I don’t mean to imply that these qualities are independent from one another, but there is no doubt which types of films are regarded as more canonical than others. “Haunting at the Beacon” wasn’t a complete disaster for me because it does try to do something to the contrary of this tendency, attempting to make correlations between Bryn’s psychological state and the presence of the ghosts while also creating some new terms of its own.