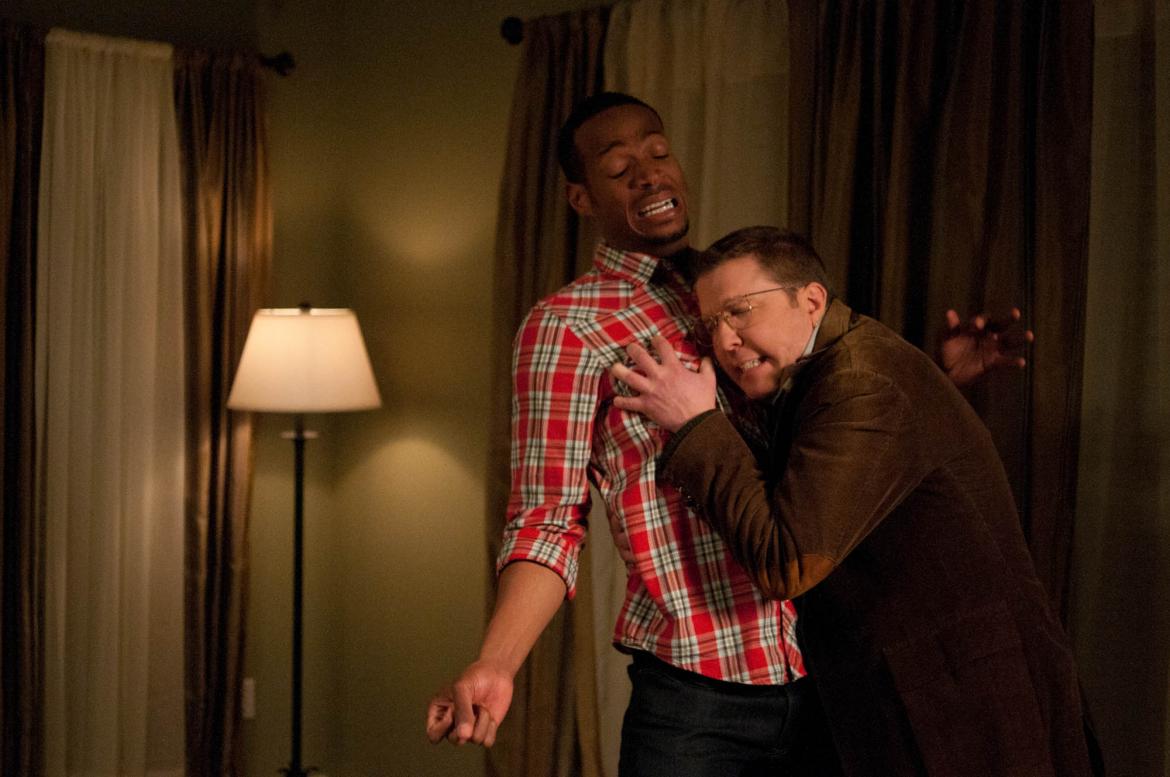 Were you as concerned as I was that Marlon Wayans would no longer be lampooning mainstream horror alongside a cavalcade of middle-tier and lowbrow comedians? If so we can rest assured that A Haunted House heralds his triumphant return to an art form he helped craft. Well, “lampooning” may be too pointed of a word to describe what is exactly happening here. The film isn’t so much satirizing horror tropes or conventions as it utilizes stylistic elements to present infantile jokes. The type of spoofing that occurs in A Haunted House and it’s contemporaries—Epic Movie, Dance Flick, the Scary Movie franchise—can be at best described as shallow, flatly filmed, ham-fisted kaleidoscopes of bodily fluids and sexuality unleashing a steady stream of jokes that may have being borrowed from a High School freshman’s improv group. These are the types of movies other films might use to make fake trailers.

Malcolm (Marlon Wayans) and his long-term girlfriend Kisha (Essence Atkins) are preparing to move in together. Though warned by his friends that Kisha will alter his life for the worse, Malcolm is optimistic the move will be good for the both of them. But when Kisha brings a poltergeist along with her the couple’s relationship is put to the test as farts, vomiting, shitting, homosexual/inter-racial sexual predation, and rape make the funnies.

A Haunted House is not a good movie in any traditional understanding. The film is dully executed, soaking in both cheap production and cheap jokes. The overarching story—which was most likely termed “reasons for stuff to happen” in preproduction—is predicated upon Malcolm losing his independence by committing to his girlfriend. It’s a film that operates with a heterosexual adolescent’s view that equates relationship responsibility with getting whipped. This is made clear by the fact the poltergeist is BROUGHT to Malcolm’s home by Kisha. The notion that Kisha’s presence (i.e. commitment) is disrupting Malcolm’s life is further accentuated after he is (wait for it) raped by the ghost haunting them; a moment played as a joke but I haven’t sat in an audience that dead silent in a while. If only he could listen to music, swim in his ridiculous pool, and play video games in peace while cleaning lady Rosa takes care of him. Living the dream.

However to focus on the lack of characterization and narrative arcs ignores the point of a decidedly carnival film. Wayans and Rick Alvarez’s script cares about fleshing out Malcolm and Kisha’s relationship as much as post World War II Japanese economics. As stated previously the film is a regular smorgasbord of scatological jokes and superficial references. To be certain it’s a movie that splashes with buckets rather than painting with board strokes. The references to found footage and possession horror films are mostly moments culled from movie trailers. (Which leads me to assume most of what is referenced was collected in a couple hours of trailer viewing). Joke sequences then inevitably result in some combination of a fart-shit-cum-piss-smoke-booze payoff. This is essence of a purely lowbrow effort that I would be lying if I didn’t admit to laughing at. Cedric the Entertainer’s turn as “Father” Williams was by far one of the few refreshing parts of the film.

What the film lacks in any form of subtlety and nuance it makes up for in some weirdly subliminal moments. The film introduces a number of side characters who enter and reappear as the paranormal occurrences play out. Of specific interest are the white characters including Dan the Security Man (David Koechner), Chip the Psychic (Nick Swardson), and swinging couple Steve (Andrew Daly) and Jenny (Alana Ubach). Each one of these characters in various forms are obsessed with possessing Malcolm. Jenny and Steve seek to arrange an initial couple swap and then attempt to orchestrate a cuckolding gangbang with Jenny, Malcolm, and some of his friends. Chip is a loosely closeted homosexual caricature who makes aggressive passes at Malcolm.

Dan on the other hand is a detached working class quasi-hick who attempts to feign blackness and requests Malcolm give him the “OK” to call him a particularly weighty racial slur. And for good measure we could add the ghost who is as white as, well, himself. In this sense the film has an underlying awareness of white culture’s desire to consume and appropriate black culture. Indeed the film has minor similarities to Django Unchained in that both are indicative of an increasing attempt to represent and reflect white guilt through shades of black cultural possession. While in Django Unchained the possession of black bodies is quite literal A Haunted House subconsciously addresses this possession through cultural capital, sexuality, and homophobic representations. Malcolm’s life as an upper-middle class black man in a period of great economic disparity speaks to a potentially new exoticism craved for by these white characters attempting to cope with their uncertain identities.

While the levels of maturity and sophisticated craftsmanship on display here leave much to be desired and little to the imagination it also seems somewhat false to critique such films by shoving them in a box they were not meant for. But that being said so much of A Haunted House is lackluster and adolescent in its meandering that it’s impossible to recommend. At its core the film is a simple “don’t get whipped” warning complete with a hefty sprinkling of homophobia and jokes about the developmentally disabled.