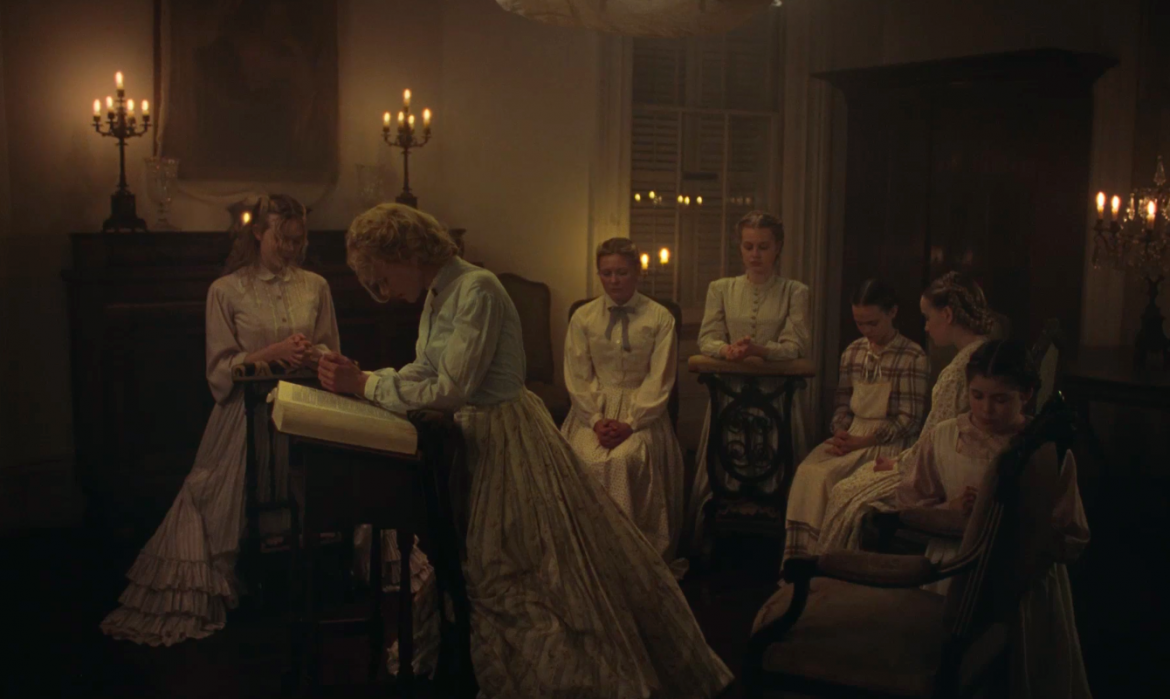 As we wait in the wings to hear more widespread responses to Sofia Coppola’s The Beguiled, groans bemoaning the film’s lack of a “twist” or Southern belle butchery are sure to arise from those dismayed by an otherwise taught, often funny, and searing chamber piece that is far more terrifying for its omissions of violence and focus on unspoken lechery.

War is on the horizon for Miss Farnsworth’s seminary: a school for girls housed on a swampy strip of land, shrouded in fog and ivy, quaintly positioned just out of sight from billows of cannon smoke. In their lacey gowns and hushed voices, the girls know little of the war (and care to know less than they already do) aside from wisps of details gained from their Confederate families. That makes the arrival of the injured Corporal John McBurney, a Union soldier, all the more tense. His swooning presence woos the women in, and soon their jealousy besets mirth, threatening the seminary’s quaint existence away from the terror of the outside.

The presence of the Civil War looms over The Beguiled, much like Martha (Nicole Kidman) and Edwina (Kirsten Dunst) guard their students with upmost precaution. Perhaps it is then appropriate that Coppola is unrelenting in her precision; protective of answers one might say, as the film never fails to uphold a level of intrigue. Even though there are some initial stumbles in transitioning between scenes of comedic and gothic atmospheres, Coppola flirts with answers always quite outside of grasp.

While everything inside the house is pristine in appearance, Coppola makes evident that her characters lead a life of willful blindness. Kidman and company are often looking: whether through doorways at the wounded Corporal, or through a spyglass at life beyond the plantation, the women gaze at objects beyond their claim. As they revel in fantasy rather than reality, Coppola’s modus operandi is an interrogation of how austere and naive the women are, even within their own ranks. A dream-like and gloomy elegance hangs over each scene, most only lit by candlelight, which is an exquisite visual representation for the darkness these women inhabit.

These dark spots, though (many left to speculation), are integral to the story. Coppola has come under fire for her decision to omit a slave character present in the novel and the 1971 adaptation. While reworking the character into something less demeaning was a possibility, their absence shows how the women cannot exist without their power, or the ability to shut out the realties of the war. After we learn that all the slaves have run away, the camera routinely highlights the disarray the seminary has fallen into on the exterior. And once inside, we see its inhabitants are as equally unhinged and chaotic. The battle that arises between each of the girls as to who can sway McBurney’s attention is their last-ditch effort to regain what semblances of the past they can still grasp.

What’s alluring about The Beguiled is how it deconstructs the dangerous privledges fantasy brings, and those who it most negatively affects. It controls your attention, whether through Coppola’s pristine visual language, or Nicole Kidman’s Oscar-caliber performance (a delicious blend of mischief and sincerity). We feel the delusions of the women, yet never fall prey to their desires. Coppola is playing a dangerous game with The Beguiled, and whether one finds it to be an exercise in genre, political commentary, or entertainment, it is a deceptive feast.